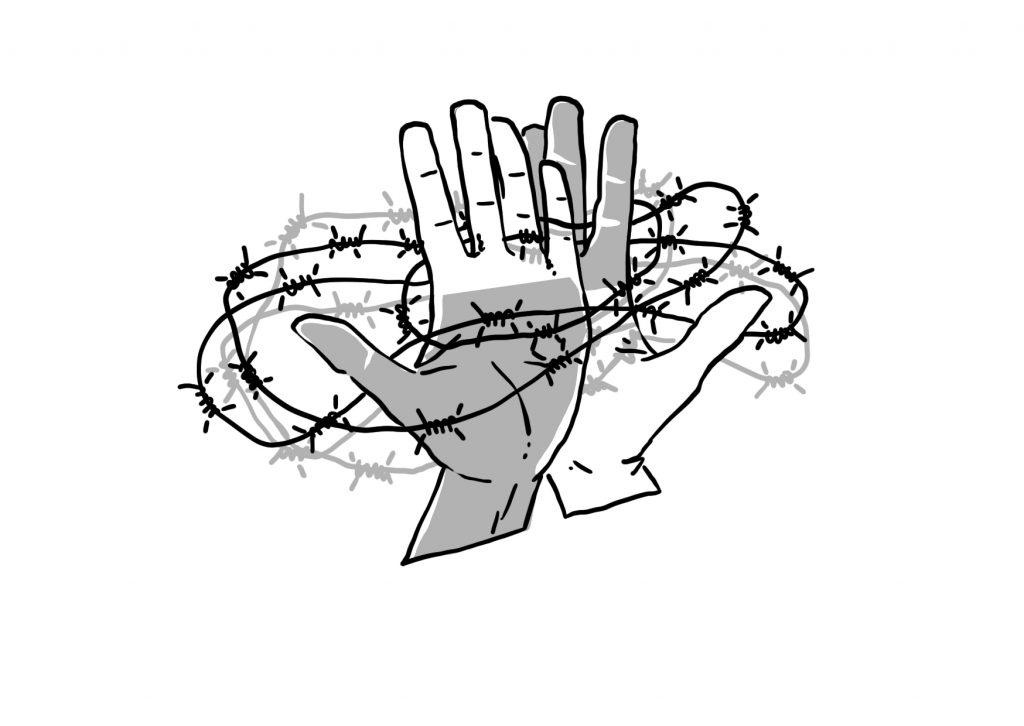 Betsy Apple is the inaugural visiting fellow at the Hertie School Centre for Fundamental Rights this Fall 2019. She is the Advocacy Director and Head of the Rule of Law Division of the Open Society Justice Initiative and an Adjunct Professor of International Human Rights Law at the School of International and Public Affairs (SIPA) of Columbia University in the City of New York.

During her fellowship at Hertie this fall, Betsy is advising the Centre on its outreach strategy, in particular, the relationship of the Centre to the broader community of human rights actors. Her research, an extension of the issues with she engages as a human rights lawyer and advocate, considers the relationship between women and justice, particularly migrant women. On October 23rd evening from 16-17h at the Hertie School, Betsy will be speaking at the Centre’s second event of the event series “Fundamental Rights in Practice”: Statelessness: The biggest problem the fewest people know about.

The Governance Post: What have been your experiences in Berlin before your current fellowship at the Centre?

Apple: In 2012, my organisation, the Open Society Justice Initiative, brought a case in Berlin administrative court challenging discrimination against pupils who were not seen as German—particularly students of Turkish or Kurdish descent. I was not doing the litigation but was helping to develop a legal advocacy strategy that would enable us to address the discrimination even if we lost the case at the administrative court level, which we did. We engaged in a campaign—operating both at the community level, with families and community members—and at the policy level–to influence school administrators, teachers, and government officials to publicly acknowledge and take action against racism in Berlin schools. The education system then, and perhaps even now, was permeated by a sense of denial. Despite the fact of a liberal German constitution, we faced significant cultural constraints. While Germany has a robust legal equality regime, for many reasons in addition to 20th-century history, conversations about racism are incredibly sensitive and difficult to have. We confronted a culture of silence around racism in education that was very hard to penetrate. We decided that even if we experienced failure in court, it was crucial to engage with the question of discrimination in the public sphere. We were working with families whose children were demoralized at school; their teachers would tell them, “You are stupid, you can’t do that, you will never go to university.” I was struck then, and continue to be interested in this idea of “Germanness.” You see even in Berlin, as progressive a city as it is, people talk about other people as “Turkish” and “Kurdish” even if they were born in Germany, or they are second- generation-Germans. In some ways, this is a question of who gets to be a citizen. Even if you have the legal documentation of a German citizen, what does it mean if you are still called “Turkish”?

GP: What is the relation between law and policy and how do they interact? What is the work you are doing at the Centre for Fundamental Rights and what are your perspectives on the role of the Centre in the university setting?

Apple: I think a human rights law approach is distinguished from a “policy” approach by the notion of states’ legal obligations as a basis for action. Human rights law requires one to recognize that individuals, and in some (albeit fewer) cases groups, have fundamental rights that the state must recognize and act to make real. Policy considerations are elastic and broader. For example, take torture. There is a strict prohibition against it in international law: there is no wiggle room. If you see the interrogation of a suspect through a human rights lens, you cannot, under any circumstances, imagine the use of torture to compel answers. A policy perspective is more relative; policy matters are not necessarily based on state obligations, but based on what is expedient for the state. Of course, human rights law and policy interact very closely, but policy may be based on considerations that do not necessarily take as bedrock people’s fundamental rights. My sense (which is based on five weeks here, so bear that in mind) is that Hertie does not have a long or deep history of integrating human rights or human rights law into the academic program. Obviously, I think not only understanding human rights but also knowing how the human rights legal framework works are critical to good policy. The creation of the Centre for Fundamental Rights seems to present a huge opportunity in this regard. If the Centre event I attended last month, a showing of the film “The Prosecutor,” is any metric, I suspect a lot of students will be interested in learning more. I also think this question about how Hertie relates to the broader human rights community at large, including, of course, people who directly experience violations and marginalisation, is a really important one.

GP: As the legal director at AIDS-Free World, you led the legal team challenging the Jamaican anti-sodomy law at the Inter-American Commission on Human Rights in 2011-12. What is the process of challenging an anti-sodomy law and what were the legal conditions and understanding of sexual violence in the setting of the Commission at this time? What are the limitations of such an international body of justice and can be a setting for bringing similar cases in the Americas?

Apple: I was working for an organisation, AIDS-Free World, at the time that looked at the intersection of HIV/AIDS and human rights violations, and in particular, sexual and gender-based violence in areas of high HIV/AIDS prevalence. Sub-Saharan Africa and the Caribbean figured prominently in our work, including Jamaica, which is a beautiful country where a confluence of homophobia, religious fundamentalism, and poverty suggested that we should prioritize a legal challenge to the anti-sodomy law. As in other countries, where homosexuality or same-sex sexual activity is illegal, the law drove people underground, validated violence against LGBTQ folks, and contributed to the spread of HIV/AIDS because if people sought treatment, they would be confessing to a crime. The case continues, as does the discrimination and violence against LGBTQ people in Jamaica (and elsewhere).

A lot of my work in advancing fundamental rights is about the power analysis– where does the power lie, which institutions and individuals have the power to speak, and what does one need to do to push those with the power to take action. The Inter-American Commission on Human Rights (IACHR) is a quasi-judicial body that issues decisions that states sometimes ignore. These decisions are not legally binding on states in the same way that a court’s decisions would be; their power lies in the fact that they can put political pressure on a state. The Commission’s decisions have very important advocacy value notwithstanding their legal effect. Similarly, different states treat UN treaty body decisions in individual complaints differently. Many states do not view them as having a legally binding effect, although this view is beginning to change with to a 2019 Spanish Supreme Court decision holding that UNTB views in individual petitions are legally binding; however, let’s be honest. Even when courts issue legally binding decisions, states sometimes fail to comply. In the end, it is people who have to mobilise and insist that governments comply with their legal obligations to protect human rights. The most powerful voices of change come from people, and those voices have to speak long and loudly.

GP: What is the role of litigation and what impact does the perception of lawyers within a multinational setting have in the process of bringing a case to an international court?

Apple: Litigation or using law, no matter where it is done, is almost never enough. It is one piece of a complicated multi-pronged approach in order to achieve the realisation of people’s rights. Litigation is, in part, a device for surfacing the circumstances in which people are placed into marginalised groups, for example. You need political will, popular support, and financial support, among many things, to solve large problems. Community mobilisation and a more integrated approach are necessary to achieve the realisation of people’s fundamental rights, and any lawyer who thinks that he or she or they can achieve lasting human rights change alone is living a fantasy!

Apple: Environmental rights and justice, to me, are fundamental to human rights. It almost seems quaint now that we used to see environmental rights as “third-generation rights” and somehow distinct from human lives. When we see Extinction Rebellion blocking off the streets here in Berlin, we are seeing people exercise their right to freedom of speech and assembly. We see that people are becoming refugees because they no longer have a sustainable environment in which to live, work, and learn. People’s access to water, land, a healthy ecosystem–all of those things that are essential to life—are threatened now. More lawyers are bringing cases against both states and multinational corporations—especially the carbon majors—and are working closely with vulnerable communities to challenge this devastation. These are complex legal questions. It may be too late, but it is now becoming clear that the right to a healthy and sustainable environment is essential to—and I would argue, part of–our fundamental rights. When I worked at EarthRights International, I was helping to challenge the role of multinational corporations in exploiting the environment and the humans who depended upon it, particularly in Burma and Myanmar, through corporate accountability litigation undertaken in the US and elsewhere. My friends who work there now continue to do that extraordinary work defending the environment and advancing peoples’ rights. I hope more human rights lawyers see the sustainable environment, climate justice, land rights, and that whole package as deeply connected to our fundamental rights so that they can work alongside the crucial social movements I am so thrilled to see here in force in Berlin.

Betsy Apple is the inaugural visiting fellow at the Hertie School Centre for Fundamental Rights this Fall 2019. She is the Advocacy Director and Head of the Rule of Law Division of the Open Society Justice Initiative and an Adjunct Professor of International Human Rights Law at the School of International and Public Affairs (SIPA) of Columbia University in the City of New York.

Mahima Shah Verma is a candidate for the Masters of International Affairs at the Hertie School. Her ongoing research and work focus on education and the rights and protection of children in the fields of international law, social and health policy, and peacekeeping and humanitarian action of the African Union and the United Nations. She holds a B.A. in History from the University of Southern California, specialising in oral history and photojournalism of mass violence and genocide in Europe and Central and South Asia during the 20th century. She is passionate about singing, photography, poetry, and learning and teaching languages.