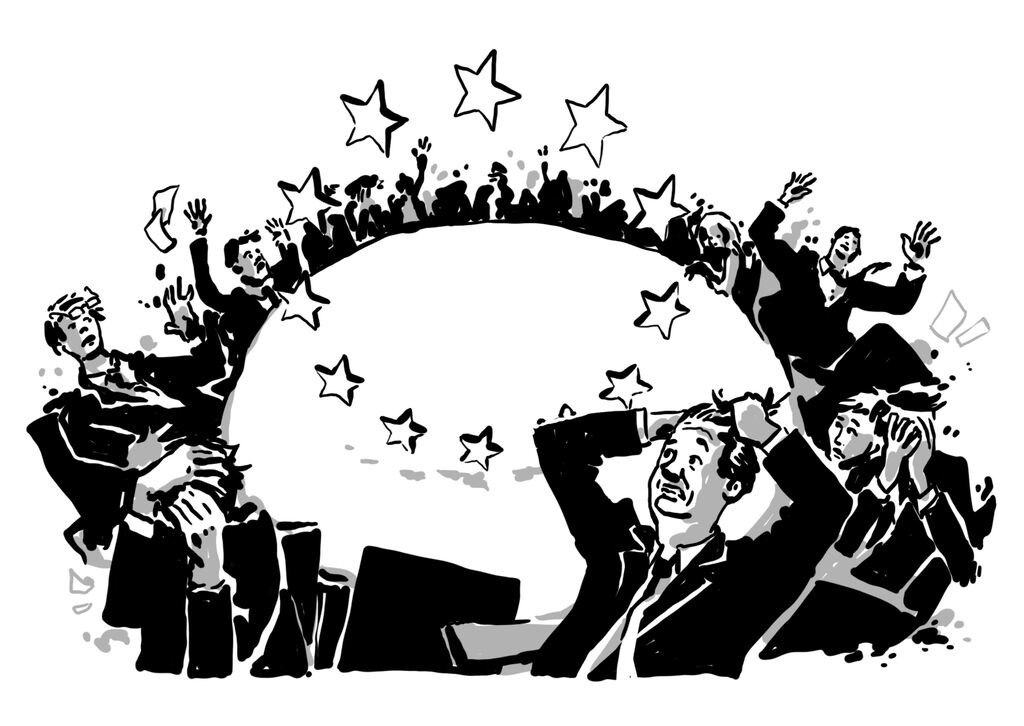 Opponents of Germany’s looming grand coalition swear that the only remedy to the Social Democrats’ troubles is a four year stint in the opposition – a much needed time-out to reinvent the party. MPP student Leon Ottmüller is challenging their basic assumptions.

Germany’s Social Democratic party (SPD) today is split over whether it should partner up with the conservative bloc CDU/CSU to form another grand coalition (GroKo). The two opposing sides – the party’s leadership and its youth organisation Jusos – are arguing over whether to retreat to the opposition and use the time there sharpen their political profile; or to assume governmental responsibilities and push for European reform and increased investment in education and healthcare.

As soon-to-be Hertie School President Hendrik Enderlein recently wrote, the GroKo negotiations include a change, if not an imperative, to focus on the future of Europe – especially since the SPD is the only party that would rally for the issue. The draft agreement discussed earlier by the conservatives, the Greens and the Liberal Party (FDP) during their now-failed attempt to form a “Jamaica” coalition, is proof that the SPD is the only party that would actively promote reform and propel Europe forwards, while others are too easily swayed by the FDP’s narrative of the EU as a transfer union. The SPD, therefore, ought to stand for the European reform proposal put forward by the French president – further political and economic integration, including a budget and finance minister for the Eurozone – and form another coalition to make sure that it is fully implemented.

But the sticking point inside the SPD is not whether the policies agreed upon during negotiations with the CDU are worthwhile. It is if being part of yet another grand coalition will allow the party enough room to renew itself from within. Many believe that the party will collapse if it is to continue with the publicly-denounced “keep calm and carry on” strategy: achieving some policy changes, but for the most part, simply going along with the conservative agenda of Angela Merkel. The enemies of the GroKo are willing to waste the opportunity to promote policies for the betterment of Germany and Europe, expecting to emerge from their cave four years later with new policies and strengthened support from the public.

This storyline rests on two crucial assumptions: First, that the rejuvenation of the party can only happen in the opposition; and second, that the electorate will surely embrace the reinvented party when it comes time to go back to the ballot box.

The first assumption tries to draw an analogy with previous grand coalitions, which resulted in lost voters for the SPD, as Jusos leader Kevin Kühnert argued: “We believe that reforming the party can only happen in the opposition. […] Every grand coalition shrinks the SPD.” But this does not explain why the reform cannot happen while being in the government.  The SPD needs to change both its communication strategy and style, so that it actually capitalises on its political victories, a challenge parliamentary leader Andrea Nahles acknowledged at the party conference and is keen to tackle with the ongoing inner-party reform.

The second argument wants to make us believe that the SPD will be more successful after its transformation, with that success immediately translated into additional voters. This logic is not wrong in and of itself, but it assumes that a makeover is what is needed to attract the public; that the same support cannot be gained by simply pushing through good policies. This reasoning belittles the ability of the party to strengthen its identity not just by talking, but by doing – and conveying that to the public.

If the SPD wants to have a clearer profile, one that differentiates it from Merkel’s conservative bloc, it needs to communicate its key policies in a clearer way, claiming them in the public sphere as its own ideas, and – when they are successfully implemented – as its own victories. In doing so, the party will re-establish its identity based on the change it has achieved, instead of on mere promises.

In short, the SPD should do good and talk about it: It should reform Europe and claim it, invest in education and claim it, reform in healthcare and claim it. It should continue the internal dialogue with its members regarding its direction and future policies, and scream it from the rooftops – and stress the contrast with the CDU, the party of no debate. The SPD should make use of its unique position as the German party with the most members, and do it all: Discuss its future while governing effectively and positively – and communicating its efforts to the public. It should therefore strive to use the upcoming coalition talks to strengthen its profile, argue for further key policies, like the ending of short-term contracts and a change to the public health care system – and own it. It should wear all of these defining characteristics loudly and proudly, not have them be an afterthought.

The secretary general of the party, Lars Klingbeil, is currently working on the reform of the party, alongside the coalition talks with CDU/CSU. He is showing that both can be done at the same time. The process of change, as all participants in the discussion clearly underline, is ongoing and does not have a fixed outcome. But by focusing on its policies and claiming these, the SPD can regain credibility with the public and rally its members around its choices in government, boldly outlining future policies and in the process, redefining itself. The SPD should think about good, do good and talk about it.

Leon Otto Ottmüller is a Master of Public Policy candidate at the Hertie School of Governance in Berlin. He studied Philosophy and Economics at the University of Bayreuth and KU Leuven in his undergraduate, focusing on European regulation and public sector economics. Before starting his master’s studies, he worked as a consultant on digital and competition policy in Brussels.