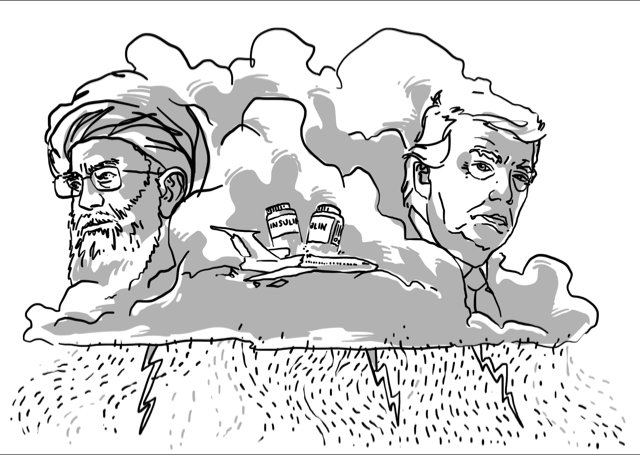 American sanctions on Iran have not weakened the regime but achieved the opposite. They have harmed ordinary people and cemented the conservative Revolutionary Guards’ grip on power. The U.S. would be well advised to pursue a more cooperative path. The first step should be to grant Iranians access to medication and spare parts for civil airplanes.

I had arrived in Iran one month before the plane carrier that America had sent to Iran’s coastline this year. My goal was to spend six weeks in Iran’s capital and study Persian, the country’s main language. In Tehran, nothing is easier than practicing the language. Everybody wants to talk to a German stranger.

And so, international politics came alive for me in Iran’s hot and messy capital. The U.S. wanted to be capable of retaliating against any Iranian attack with “unrelenting force”, as then-national security advisor John Bolton put it. Against many odds, this has not happened. Even politically restrained Germany attributed a recent hefty blow against Saudi Arabian oil fields to Iran. Despite this attack against an ally, no American planes have left the carrier so far.

Hidden underneath this series of events unraveling at breakneck speed, U.S. sanctions on Iranian trade with the world have been causing the Iranian economy to tank. In 2018, unemployment was at more than 12 percent, with more than 28 percent of young people unable to find a job. Since then, the economic situation has severely worsened.

“Hello my dear friend, where are you going?” asks Saeed, my taxi driver for the evening. I intend to visit a friend on the other side of the city. During the 40 minute ride, Saeed will tell me a story that I heard all too often in Tehran: job loss and desperation.

“My parents respected me,“ he tells me as we weave our way through the city’s clogged streets. He speaks in a monologue. There is much to tell. “I was an electrical engineer. Until last year I worked for a very big energy company. Half of the electricity grids in Bandar Abbas are my work.”

Back when Saeed worked in Bandar Abbas, a port city in the south of the country, Iran’s economy was still growing through the sales of oil and gas. However, in May 2018, the administration of Donald Trump opted to break the Joint Comprehensive Plan of Action (JCPOA), a treaty that allowed the world to control Iran’s nuclear program in exchange for economic cooperation and the possibility of trade.

Previous U.S. president Barack Obama, together with Russia, China, France, the UK, and Germany had hoped to use this treaty to kickstart further negotiations. He had intended to bind Iran into a tight web of international friendship and rules, take away their incentive to develop a nuclear bomb and to threaten Israel and Saudi Arabia. It gave international experts the possibility to control all of Iran’s nuclear sites.

President Donald Trump called this “the worst deal in history.” He installed the toughest sanctions Iran has ever seen. Since then, its economy has fallen into an abyss. Iranian savings are getting destroyed at incredible speed. After having peaked at 50 percent in April, inflation is currently at 35 percent.

“One month after having lost my job,“ my new friend continues, “I still hadn’t found a new one. Then, because of the sanctions, inflation grew so much and took away all our savings! That was when my wife left me. She took our daughter and moved back in with her parents. I don’t blame her. They have a house. She is well off there.”

I am a bit unsettled by Saeed’s eagerness to look me in the eyes while we’re talking. Luckily, traffic isn’t that wild today. He says: “In the mosques, they preach war and that we all have the wonderful opportunity to become martyrs for Allah and our country. I just want to be friends with the world. Aren’t we friends?”

He only raises his voice once, when talking about his own government: “I don’t want my taxes to go to Hezbullah! We must focus on our own problems.”

The Iranian regime does indeed support Hezbullah, a militia and political party in Lebanon that menaces Israel. The regime also develops a missile system. Officially, the system is designed to protect Iran from attacking foes, but may in the future carry nuclear warheads to Israel or Saudi Arabia. The American government has the moral duty to actively defend its allies and itself against Iran.

Yet, the American sanctions are mainly hitting ordinary people like Saeed.

The U.S. government knows this. In 2017, Lieutenant General Vince Stewart, then-director of the Defense Intelligence Agency, testified before the Senate Committee on Armed Services that the relief in sanctions during the JCPOA had mainly benefitted “economic development and infrastructure” in Iran. He stated that Iran had only minimally used the additional money to strengthen its military.

The ones who make a profit from the sanctions are Iran’s ultra-nationalist and Islamist Revolutionary Guards. Besides strongly supporting Iran’s “Supreme Leader” Ali Khamenei, they smuggle oil, medicine, clothes, and food into and out of the country – everything on which Saeed’s life depends.

“I thank god that I don’t have diabetes. What would I do without medication?” Saeed asks me. These medicaments are a solid source of income for the Guards. As early as 2007, before the sanctions had made the economic need for smuggling even greater, a member of the Iranian parliament analysed that the Guard’ annual smuggling business exceeded $12 Billion – a proud sum, capable of financing a huge stack of missiles.

In sanction-crippled Iran, the regime cements its military might and continues its nuclear program. At the same time, ordinary people without strong political fervor suffer. It becomes clear that the logic of applying sanctions to exert direct pressure on the regime doesn’t hold in Iran’s case.

The U.S. is playing with fire if it wants to apply indirect pressure through ordinary Iranians. Causing them to suffer so much that they topple their government may not work out as planned. As Saeed puts it: “We Iranians are proud. We won’t let any foreigner tell us what to do.” Instead of toppling their regime, their opinion may well turn against America instead and would only further undermine America’s interest for stability for the region. A fresh public wave of outrage against the U.S. would enable the Iranian regime to focus on its aggressive foreign policy.

A first step to reengage with Iran could be to loosen tight financial regulations which make it difficult for Iran to import medication. Another possibility for lower sanctions could be spare parts for airplanes. The engineers of the country often cannot repair the planes of Iran’s old air fleet because the necessary material is lacking. The planes crash regularly, causing hundreds to die.

Over the last weeks, Iranian authorities have expressed their interest in new negotiations many times – under the condition of lifted sanctions. Lifting the pressure just slightly would empower the Iranian regime to re-engage in negotiations without a loss of face. Similarly, it would signal to Saeed and his friends that the US is not acting to threaten their livelihood.

Lukas Feldhaus is a candidate for the Masters in International Affairs at the Hertie School. Currently, on an exchange semester at Columbia University in the City of New York, he focuses on Middle Eastern Security and Environmental Economics. He speaks five languages, including Persian and is fascinated with Iranian culture, history, and politics. Lukas holds a Bachelor in Physics from ETH Zürich.