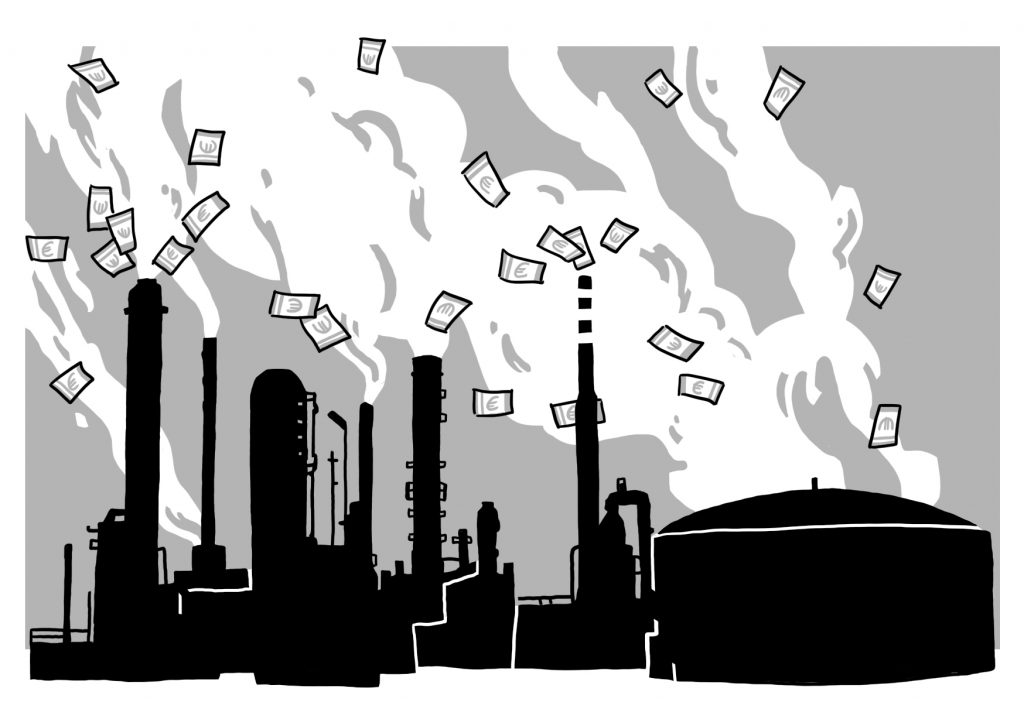 The European Union wants to put a tariff on the CO2 content of imports. Can it protect both European industry and the global environment?

Steel manufacturers are a resilient species. They are used to working in life-threatening environments, and their factories have been around for more than 150 years, fortifying the backbone of the globe’s industrialization. Still today, European Union (EU)-produced steel makes up 11% of the world’s production. Nevertheless, EU steelworkers are slowly entering the UN’s red list of endangered species. Not only have 40,000 EU steelworkers lost their jobs over the past years, but they also no longer just have to face the danger of standing in front of several thousand-degrees ovens or handling liquid metal. Steelers in the EU are now more worried about a seemingly negligible problem: the smoke that comes out of their factory’s chimneys.

Until recently, heavy greenhouse gas emitters in the European Union were basically allowed to cheat everybody else in the bloc: they could pollute for free. This loophole in the EU emission-reduction scheme protects economically relevant industries from international competition. Among the happy lot jumping through this loophole is the steel industry, which produces both 0.8% of all jobs and 0.8% of the total GDP of the EU. Nevertheless, the EU Commission now wants them to pay for every bit of CO2 they emit. Stressed-out steelers and cement-producers need not worry about lower production costs for their non-EU competitors, though. The EU still has two aces left to simultaneously protect its businesses and also the environment: carbon tariffs and the “Brussels Effect”.

Didn’t polluters already have to pay for CO2 emissions in the EU?

Unfortunately, not all of them. For until now, the EU has exempted many a company from its so-called Emission Trading System (ETS). But this is about to change.

Under the ETS, the bloc auctions off a limited number of allowances for the discharge of earth-heating gases such as methane or carbon dioxide (CO2) every year. Businesses can buy and trade them amongst each other, but the total tally of permits is fixed. By controlling this quantity, the EU Commission effectively caps the total amount of gases let off into the atmosphere. If companies don’t buy enough pollution permits, they must pay a penalty fee.

While the price for these certificates was low for a long time, it has risen from €7.50 to €25 per ton of CO2 in the past two years. This price surge followed the Commission’s decision in 2018 to lower the overall available amount of permits on the market, making emissions a costly problem on our steel producer’s balance sheet.

Or so it would have, had the Commission not handed out free allowances to naturally bad polluters, who are additionally  facing aggressive competition from abroad. Steel is one of them, having been the center of several so-called “trade wars” with both China and the US in the past decade.

This free allocation made sense to the EU Commission for several reasons. First, proponents of free allocation argue that companies receiving free permits will feel equal price pressure as those in other industries without. Being able to sell their cost-free permits should fuel their emission-saving motivation.

Additionally, the EU, of course, does not want any more hard-working steelers to lose their jobs. It is possible that higher carbon prices could make steel companies just leave the EU for countries with no emission fees. They would then simply export their steel bars back into the bloc and undercut their still-European competitors.

While this outflow of companies has not yet happened and large steel companies such as ThyssenKrupp still produce most of their bars in the EU, the argument for a European carbon border tax receives quite some support from industries and academics alike. Even more so, since according to Nobel Prize-winning economist William Nordhaus, the exodus of heavy-emitting industries would not only be harmful to the EU economy but also not shrink global emissions either. Instead, they may even rise due to generally lower environmental standards in non-EU countries.

The Golden Days of Free Emissions are Over

Despite the possibility of companies leaving the bloc, pollution in the EU will not be free anymore. The EU Commission’s new president Ursula von der Leyen is adamant about making the EU carbon neutral by 2050. Her vision means that even steelmakers will have to pay for heating up the environment.

So what is the EU’s first ace? Von der Leyen played it in her speech on the EU’s Green Deal in December 2019: “If [European companies] respect our environment, it cannot be that they face unfair competition from heavy polluters. And that is when we will apply a Carbon Border Adjustment Mechanism.”

Such a tariff first measures the amount of carbon emissions in an import to the EU and then makes the importer pay the same amount it would cost them if they had emitted these greenhouse gases within the bloc. Since producers from countries with equally strong environmental laws could be excluded from paying carbon tariffs, the EU Commission hopes that these companies will lobby their governments to adopt similar laws as the EU, just to face less paperwork.

Overpowering foreign governments is the EU’s second ace, the so-called “Brussels Effect”. It trumps most of the time, since the EU, with its tough regulators and large market, is a less easy target for lobbyists than, say, Saudi Arabia. One of its recent victims was the International Civil Aviation Organization, which in 2016 developed a global carbon offsetting system of its own after the EU had made incoming flights from third countries pay for their emissions.

While this effect has convinced French President Emmanuel Macron and Luxembourg-based steelmaker ArcelorMittal to hail carbon tariffs as key to a breakthrough on international CO2 reduction, German industrialists are less convinced.

The German Federation of German Industries (BDI), representing more than 100,000 companies and one of the largest industry associations in Europe, sees “currently no convincing concept known for a carbon tariff”. It instead wants to keep the free allocation of emission permits.

BDI’s two concerns about the practicability of such carbon tariffs weigh heavily: First, hasn’t the EU fought with US President Donald Trump about the imposition of protectionist tariffs for a while now and hasn’t the World Trade Organization consistently ruled against them?

Second, how does one actually measure how much CO2 leaves a factory’s chimney on the other side of the world when it produces a steel bar?

The first problem is more straightforward to solve. Under international trade rules, countries may introduce tariffs if they are either “necessary to protect human, animal or plant life or health” or “relate to the conservation of exhaustible natural resources”. These rules also demand that the EU take measures to limit its own emissions, a box easily checked by the EU ETS.

The EU has even found a way around the difficulty of correctly assessing the carbon content of steel bars and fossil fuels entering the EU from places as far away and opaque as China and Saudi Arabia. Instead of sending an army of unwelcome inspectors to their factories, it just assumes that imports have the same average emission level as domestic industries. These values have been measured with care over a long time and are ready to be used. In its latest “Green Deal” announcement from March 4, the EU declared exactly this tool to be the assessment of choice for the first tariffs.

With this implementation of carbon tariffs, the EU has the industry’s back just as it has in the past. However, global greenhouse gas levels will only shrink if the magic “Brussels Effect” works quickly and thoroughly – in the Chinese, US and South African steel mills alike. Part of the magic is us public policy students. Let’s spread it.

Lukas is a dual degree student with Columbia University, where he currently specialises in all that has to do with Energy & Environment. He’s particularly excited about achieving economic development while transitioning to a zero carbon economy at the same time. If you want to discuss anything related to finance, tech or policy-making with him, please shoot him a message. If he doesn’t answer immediately, it’s probably because he’s busy running after a ball or eating some delicious ramen.