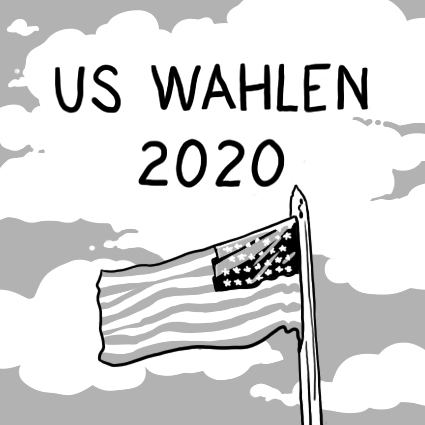 Fabian Masarwa (MPP 2020) und Moritz Czygan (MPP 2020) talk about election campaigning and the primary season in the United States. So far, not so interesting. What’s new and interesting: They record and upload their current political debates as a new German-language podcast „US Wahlen 2020“on Spotify, iTunes, and other global streaming platforms. In Germany, such a podcast fills a niche. Many people are interested in the US election campaigns but do not have the time to inform themselves in depth.  „US Wahlen 2020“ comes into play here. In each subsequent episode until the presidential election in November 2020, the Podcast features detailed overviews of the race and its current status. Furthermore, the episodes focus on the specificities of US election rules mostly unknown in the German context. Full disclosure: This podcast is an entertaining way for non-native speakers to practice their German.

February 12th, The Day after The Democratic Primary in New Hampshire:

Moritz: “Warren has the best organization! She will win the nomination! You want to bet?”

Fabian: “Accepted. I say, Buttigieg has the best ideas! He’s going to be the candidate!“

This is how it all started.

The role of the US Election Campaign in Germany

US elections have always fascinated the German population. You’ll remember the famous speech of then-candidate Barack Obama in front of hundreds of thousands of people at the Berliner Siegessäule, the fierce competition in the 2016 primaries between Clinton and Sanders, and of course the thrilling duel between Clinton and Trump over the White House. These moments were big news in German living rooms.

One reason for German interest is the US political system and its stark contrast to that of Germany. The US system is highly focused on the president, thus placing candidates in the centre of attention during campaigns. In Germany, the chancellor is not voted for directly by the people, rather the citizens vote for a party and then the representatives of the Bundestag elect a chancellor.

Furthermore, the concept of primaries does not really play a role in German politics. It would be as if – for example – the Social Democrats would vote state-by-state for candidates to be their nominee. The winner would then be the nominee for the Bundestagswahl. This is not the case. Ok, wait: A smaller sort of primary exists in Germany. At the moment, the best example is the election practices of the Christlich Demokratische Union (CDU): Armin Laschet, Friedrich Merz and Norbert Röttgen. They are all vying for the position of CDU’s new party leader, which will be voted for at the next party convention. The winner will probably be the CDU-candidate for the chancellorship; however, this comparison falls short – very short. The vote does not occur on a state-by-state basis and a voice is only given to delegates.

This fascination is reason enough to focus on and to discuss the US electoral campaign during 2020. We do exactly that in our new, German-speaking Podcast “US Wahlen 2020”, to be regularly released until November 4th, when the winner of the presidential election on November 3rd will be known.

Good question! We do not have a good answer for that. To be honest, we do not have a certificate to be a pundit and we are not journalists. Instead, we are two students with a nerdy hobby: US politics.

From Delegates to the So-Called Momentum

While others study in the library and prepare for lectures, we check who collected how many delegates in New Hampshire. While others watch Youtube-Tutorials about supply and demand curves, we listen to podcasts about fundraising and a so-called momentum. Quickly we noticed that we are not alone! Since then, we have discussed US politics, the primaries and – yes – we bet on the results and watch the debates late at night.

It was clear right away that we want to know more than what is covered by the German media. German media, of course, can only provide an overview as it is more relevant for the audience what happens in German and European Politics. But surprisingly we realized – by talking to friends – that there might be more nerds out there who are interested in our hobby and would like to go into the details of US elections. We have discovered a niche.

US Wahlen 2020 – The Podcast for the Meantime

After a couple of discussions, we came up with the idea to start a podcast. Why a podcast? We listen to a lot of podcasts while doing other things. While studying or while playing sports (sometimes). We thought that this is the reason why a podcast could be an easier way to get informed: Reading an article while doing something else is difficult if not impossible. Listening while doing something else is doable. While brushing teeth, while studying or while just relaxing on the couch. And of course, there is another reason: It is easier to say the names– Klobuchar or Buttigieg- than to write them.

Each episode has a twofold approach. In the beginning, we talk about the current status of the race: who collected the most delegates in the last primaries? What does it mean for the next ones? Who dropped out and why? In the second part, we get into the details and describe the background of various US-specific elections and campaigning rules and concepts that are often new and confusing – especially for audiences familiar with only the German context of politics. For example, in one of the latest episodes, we first discussed the results of Super-Tuesday before we dove deeply into the rules about what happens to the fundraised money and delegates of candidates who have already dropped out of the presidential race and suspended or withdrawn their campaigns.

The new episode deals with the results of the March 10th primaries and what they mean for further campaigns. Beyond that, we talk about the gap within the Democratic Party: Moderates vs. Progressives. What do they want, where do they differ and what seems to be more promising for the presidential election in our opinion?

Where to Find Us

The podcast is already available on Spotify, iTunes, Anchor and with more streaming channels to come soon! If you are interested, tune in. Leave a comment, recommend and be critical!

PS: Nerds already noticed: Warren and Buttigieg already dropped. Both of us lost the bet. But there is hope: The probability is high that our predictions will get more accurate with the fewer candidates. Do you want to bet?

Moritz Czygan is a Dual Degree student at the Hertie School & the Bocconi University in Milan. Currently, he is doing his Second Year at Bocconi. He holds a Bachelor in Economics and Business Administration. His research interest focuses on gender economics, wealth inequality and intergenerational justice in policy-making while his non-research interest centers around US Politics and comedy.

Fabian Masarwa is a Dual Degree student at the Hertie School and the Bocconi University Milan. Currently he is finishing up his studies in Milan, researching effects of the digital transformation on employment. He holds a Bachelor in Politics and Law and is all into labour policy and digital policy.