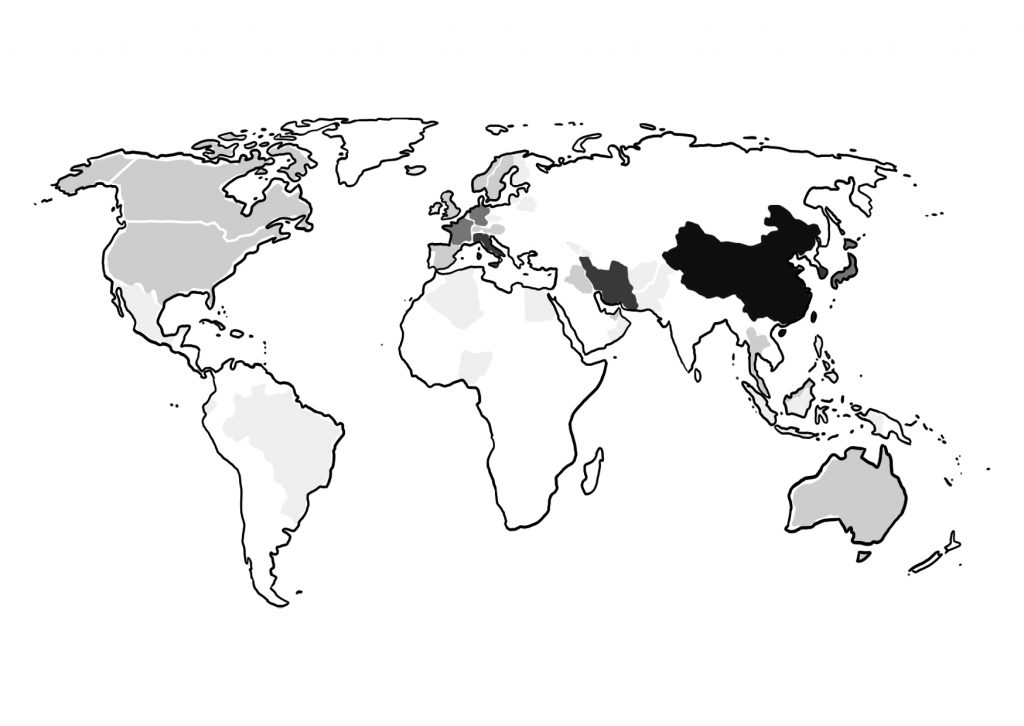 As the coronavirus (COVID-19) dies down in Wuhan and gains tide outside of China, discussions on what the Chinese government (CCP) has done right to curb the spread on its territory have grown. As a citizen of Wuhan, quarantine has enhanced my insights into the muscles of the state. Behind the design and implementation of its draconian measures, the Chinese state has made full use of the existing social structures in China and supplied Wuhan with what it needed. Chinese media described the CCP’s achievement of the containment insofar as a product of the “state-led system”. While open for readers to reach their own verdicts, the reflection that we can gain from observing the epidemic control in China extends beyond a unidimensional debate on authoritarianism.

Xiaoyan is from Wuhan, the capital of China’s Hubei province at the centre of the COVID-19 outbreak. She has been under quarantine in her hometown since 23 January 2020. Like many others in Wuhan, she lives in a residential quarter (小区), from which she is restricted from exiting. Xiaoyan has mostly stayed inside her building during the past two months of quarantine. Now that the epidemic has begun to calm down in Wuhan, she has started taking occasional strolls in her quarter.

As a Wuhanese local who has been under lockdown within the city since 23 January 2020, I have witnessed the sudden halt of all public transport, strict separation among urban districts, the entry and exit restrictions of residential quarters, and in some extreme cases, the isolation imposed at the household level. At the height of the crisis in February, I reposted countless SOS messages on my social media accounts from ordinary people crying out for a bed in a hospital. 2,423 people have died in hospitals in Wuhan at the time I am writing this. The mortality rate in Wuhan is five times the national average (excluding Wuhan), a conservative estimate as some victims were not officially recorded in the casualty count due to medical stress. Instead, they disappeared quietly in despair without medical attention.

My city walked through its darkest moments. After two months of draconian control, we are finally approaching the end of the tunnel. Wuhan has had five consecutive days of zero infection, in stark contrast to the more than 13,000 cases at the peak of its spread. There are several factors behind the costly success of COVID-19 containment in Wuhan. Coming from Wuhan myself, I was surprised by the way that the state has penetrated the trivial aspects of everyday life.

Behind the design and implementation of the measures, the CCP has made full use of existing social structures and supplied Wuhan with what it lacked. Chinese media outlets described the achievement of the virus’ containment as a fruit of the “state-led system.”

The phrase “state-led system” refers to the Chinese phrase: 举国体制 (jǔ guó tǐ zhì). Without referring to existing literature, I define a “state-led system” as the institutional settings and political norms allowing the state to plan and execute policies in a top-down manner that is not exclusive to any political regime. In Chinese literature, 举国体制 was first used to describe how the sports industry was promoted under strict planning of the state. Later on, the phrase gained a wider usage: the state-led system has its roots in hierarchical bureaucracy. When the top leadership defines the goal, this purpose becomes the highest political priority and redirects all available resources at its service. In the case of epidemic control in the capital of Hubei Province, anti-virus efforts became the highest priority of society. To that effect, both the governor of Hubei and the party secretary of the provincial government were removed amidst the quarantine because the central government deemed them incapable of executing orders. The list of removed officials goes on.

At the start of the quarantine, many friends asked whether I had enough food at home. As a highly urbanised city with about 9 million residents locked inside the quarantined zone, Wuhan alone could not supply the necessary groceries to feed its entire population. Just one day after the imposed quarantine in Wuhan, Hubei’s authorities also ordered complete self-isolation and halted transportation between villages and towns within the region. The provincial shutdown implied that conventional food supply from neighbouring farmlands into the city also became impossible. While the public’s concerns were real, they did not morph into a total panic because local state-owned supermarkets immediately changed their mission to semi-public goods providers. Before the outbreak, both supermarket chains competed like normal companies with other independent stores or big multinationals in Wuhan such as Carrefour and Metro. But when the government of Wuhan was coordinating food donations from outside the province, they needed someone to help with the logistics of retail and distribution. Some of those vegetables were asked to be sold at the government-monitored price, which was not reasonable for businesses during a time of crisis. As a result, state-owned supermarkets took on this job. The political pressure from senior levels of government led to anti laissez-faire behaviour and stabilised the market when private supply at times doubled the price. Potato prices in the city, for example, rapidly increased in days from around 2 RMB to 5 RMB for half a kilo.

In sharp contrast to food provisions, the terrible shortage in medical resources revealed that Wuhan was not prepared. Before the COVID-19 outbreak, there was only one hospital in Wuhan equipped with isolated wards to contain the highly contagious virus. The Chinese health care system is predominantly public. Hospitals, in place of general practitioner offices, shoulder the majority of healthcare responsibilities. When hundreds of patients flooded into the emergency departments of hospitals in Wuhan, the whole system was on the brink of  collapse. Not only did the city run out of ICU capacity to take in more patients, but medical staff infection was also the most severe nationwide. By the end of January, it was confirmed that more than 3,000 doctors and nurses were infected with the virus due to poor protection equipment. By then, the COVID-19 death rate in Wuhan was over four times the national average. Facing medical shortages, the central government coordinated more than 38,000 civilian and military doctors as well as nurses across China to empower the field teams in Hubei Province. The first group arrived almost the day after the quarantine was announced. Within a few weeks, Wuhan gathered 10% of the Chinese Critical Care Force. Without this national re-enforcement of personnel, Wuhan could not have sustained itself.

Transmission containment requires as much active management as patient treatment. Due to the standard 14-day incubation period and human moral hazard, vital steps such as early-stage detection, tracing, and separation were difficult to implement. To achieve a complete quarantine and obtain precise information on local transmission rates, senior politicians needed support from the lowest levels of bureaucracy.

The administration segmented Wuhan and other big cities into districts (区), streets (街道), vicinities (社区), and eventually introduced a rather recent profession in government: grid managers (网格员). Each grid consists of one or two grid managers supervising around 200 households. On an average day, grid managers deal with some of the most rudimentary issues of citizens’ lives, such as putting up posters on policy changes, document verification, and population registration. The existing grid managers’ network was not set up for epidemic containment but it suddenly became the direct point of contact for the municipal government. Although grid managers are the most well-trained civil servants, they face a slim chance of promotion and receive a paycheck of roughly 500-600 EUR per month for their life-saving work. Nevertheless, they are the civil servants who know their community best. At the peak of strict population control, it was almost impossible for every person who was suspected of being infected to go to hospital by him or herself. Thus, grid managers bridge the gap between the government and its people, making sure that the measures to implement quarantine are delivered to the smallest capillaries of the city. In the last two months, the responsibilities of grid managers include receiving orders directly from the municipal level, collecting and reporting real-time statistics, as well as facilitating the population divergence mechanism. Their role became especially vital when the makeshift FangCang（方舱） Hospitals were built in Wuhan. In addition, grid managers are the first port of call for all suspected cases (including those in close contact with the patients). Suspected cases and close-contacts are all requested to go to isolation hotels to wait for their PCR test. Some suspected patients who are already in critical condition bypass the isolation stage and undergo treatment at designated hospitals. Afterward, identified patients are sent to hospitals if they are in severe situations; otherwise they are sent to FangCang if they only show mild symptoms. Once their treatment is complete, patients are handed back to isolation centres for further observation. After 14 days, recovered patients can return home. Overall, grid managers facilitate and oversee this whole process.

With the imminent slowdown of COVID-19 transmissions in China as rapid outbreaks pick up speed in other parts of the world, many Chinese media outlets are beginning to discuss the accomplishments of the government. One official state news channel even started to credit the “victory” to the “superiority of the system”. While that is, in my opinion, a hasty and superficial conclusion to the whole epidemic control campaign, the solutions offered by state-owned supermarkets, medical resource mobilisation, and grid managers testify that comprehensive coordination has been vital in tackling the significant public health crisis in China.

Wuhan, as the first city of this size in history to be put under quarantine for epidemic control, mapped out some of the questions we must ask in the wake of a highly infectious pandemic. These questions are related to the logistics of supplying necessary goods and facilities, data collection and patient tracking, as well as the implementation of effective prevention and isolation policies. How do we facilitate the need for food and hospitals? Who can guarantee an effective stay-at-home policy? How should we prevent the potential spread of COVID-19 to family members and cohabitants for suspected patients?

The Chinese answers to these questions make me hyper-aware of our state-led system. At its core, the system is about resource mobilisation. One does not need to adopt the entire political system of China to learn from the key organisational insights of the country’s experience of the COVID-19.

Xiaoyan HU is a second-year MPP student from the dual–degree program with Sciences Po, with a natural curiosity and the willingness to learn and share. Mostly focusing on EU politics and industrial policies for academic formation, Xiaoyan occasionally comments on China-related social topics as a citizen of the country.