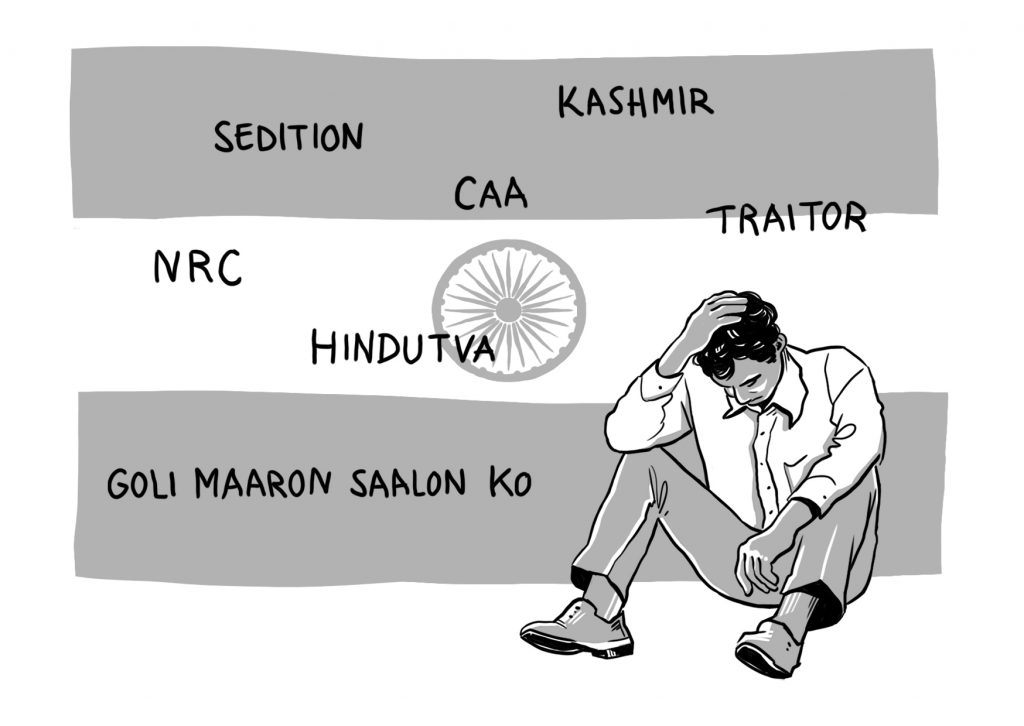 It isn’t merely a Hindu versus Muslim issue. It’s a Hindutva (Hindutva ≠ Hinduism) versus Secular India issue. A battle raging in the world’s largest democracy.

This piece is not part of the existing Indian Citizenship Amendment Act series.

Note: This piece was written before the February 2020 riots in Delhi.

This December, I went back to the city where my parents grew up – Mangalore. It is a small coastal city in Karnataka, in the south of India. The city of Mangalore is governed by the Bharatiya Janata Party (BJP), the party of Prime Minister Narendra Modi. The signature saffron flags of the BJP hang all over the city, never letting you forget who is in power. I used to associate saffron with India, but it has since been tainted. Now it only reminds me of the extremist BJP ideology – Hindutva.

In Mangalore, as in the rest of India, people protested against the Citizenship Amendment Act (CAA) in December 2019 in defiance of former Section 144 which deemed any assembly of four or more people unlawful, to shut down any dissent against the Act. The police, in retaliation, hit and shot at protestors. No tear gas. No water cannons. Not with rubber bullets, but the real kind.

Two Muslim men were killed. One of the victims was a father to two young children. The police burst into hospitals and forced their way into the intensive care unit and patient rooms to look for protestors. All of this was caught on CCTV. And yet, to date, the police have faced no repercussions.

Due to the fear of public backlash after the police killed two civilians, a three-day curfew was imposed on Mangalore. Colonial era laws of curfew and sedition, previously used by the British to silence political leaders fighting for India’s independence, are now regularly being used by our own people against us.

People had no food in the house as no one had prepared for this. My uncle went to the market and saw people being hit with lathis (long brown sticks carried by policemen) for simply buying vegetables. From my apartment window, I witnessed cops hitting anyone on the road, people who were just looking for basic necessities. Deserted roads except for police roaming everywhere. Three days of being a prisoner in our own house. No mobile internet – only WiFi. We went through this blackout for just three days. The state of Kashmir, under a longstanding curfew of its own, has been without  proper internet for over six months.

I felt angry yet helpless as I watched the brutality from my window during a curfew now found to have been  imposed illegally, a ruling from the High Court that was too little, too late. Where were the opposition leaders during the Mangalore curfew? The ruling government had blocked them from even entering the city.

Such was the fear in my own, small city. Yet this is indicative of what the rest of the country is facing under the ruling BJP.

Being a minority in India.

What’s happening to the Muslims right now is extremely distressing to see. I do not aim to speak from their point of view. I also do not aim to speak about what can easily be seen all over the news, rather from the point of view of a fellow religious minority. The repercussions and fear of violence against Muslims are felt on the rest of us other minorities in India too. These minority religions in India are, in descending order of population: Islam, Christianity, Sikhism, Jainism and Buddhism. Hindutva ideology looks at Islam and Christianity as foreign religions, since to these fanatics they have been brought to India by foreign invaders.

During my trip home this past December to India, for the first time I felt the exclusion that stemmed from not being Hindu. Your religion is your label in Indian society. So, being Catholic and female in a patriarchal society, the fears I have in speaking out at all against the ruling BJP in a small city are real – of harassment by fanatic Hindu BJP supporters, for my safety and for being charged with a case of ‘sedition’.  If you are Hindu and male, it seems to come with a certain privilege in this environment under Prime Minister Modi.

Most of the country watches Hindi news channels that are funded by rich BJP supporters. The rare unbiased sources of news are in English (both domestic and international) and hence not easily accessible for all. So, for non-Hindi speaking minorities outside of the north of India, chances of being covered by the mainstream media are also not high.

So easily was a single act excluding Muslims legitimized, the fear that tomorrow it could be the rest of us minorities is not that far-fetched. The rhetoric in my Catholic community is: “The Hindus are a majority. So keep your head down or they could come after us next.” It feels like that fear has seeped into the Church too as not many speak out against the saffron elephant in the room. Not when churches are vandalized by Hindutva thugs and not now when fellow minorities are under threat.

The Citizenship Amendment Act includes my community. For now. But in this environment, under this government, nothing feels certain.

It is  justified for a country to want to know that the people in their country are living there legally. What is not justified, however, is when people who are already citizens are essentially having their citizenship doubted and then allowing/revoking their citizenship on the basis of religion. The way the CAA targets Muslims goes against the very secular values upon which this country was formed.

Dissent against the CAA is punished. Journalists: detained. ‘Illegals’ under the Act: housed in detention camps. Students in colleges: beaten up by the police. All without repercussions, as the police are in the pockets of the government. Even the courts have been inefficient in protecting individuals’  basic freedoms. All this religion-based distraction while the economy is facing a downturn.

The severity of the current situation is reminiscent of  the Emergency under Indira Gandhi, of which I’d heard stories from my dad. Never in my own lifetime have I felt such polarization nor witnessed such violent punishment for dissent in India as I have under the ruling BJP.

There is a common misconception that being Indian means being Hindu. While Hindus are the majority, the idea of India was never solely a Hindu construct. A British civil servant once said, “Scotland is more like Spain than Bengal is like Punjab.” From North to South India, we have no common language, let alone a common food, ideology, ethnicity, or even culture. The different states of India used to be kingdoms that came together under the British. We have fought for independence together, live as neighbours, are passionate about the same cricket team, and celebrate achievements together across religious lines, subsequently developing a shared Indian identity post-independence: an Indian identity that is an amalgamation of the collective experiences of many religions and cultures.

While the ruling government politicians shout out their hateful slogans of “Shoot the traitors” (Goli maaron saalon ko), instigating violence…

The fight for a secular India continues. And I have never been as proud that the loudest voices in the country are the community of women and youth from all backgrounds protesting in the bigger cities almost every day against this law. Against the direction of the country moving towards becoming a Hindu state.

Jennifer Vaz is a second year MPP student at the Hertie School. She is an Indian, born and lived all her life in Muscat, Oman. She did her Bachelors in Commerce in St. Aloysius College, Mangalore. When policy talk gets too much, she loves board games, tinkering around with plants and is currently obsessed with the art that is Lana Del Rey.