While exploring the past of the Hertie School’s building at Friedrichstraße 180, first-year MIA student Hannah Hückstädt explains why it is the ideal place for studying public policy and international affairs.

When I went to pick up my student ID before starting my first semester at Hertie, I remember walking along Friedrichstraße in awe, being struck by the old facades and exclusive shops in the area. I was surrounded by groups of tourists drooling over the chocolates at Läderach while making their way to sights like Checkpoint Charlie or Gendarmenmarkt.  Actually, I passed Quartier 110 at Friedrichstraße 180 several times before I realized this was the place I was going to study; nothing in the area appeared like a university to me. Indeed, sharing the building with doctor’s offices, a bank and high-end retail shops did not seem like the typical university environment I expected to find. Yet, diving a little into the building’s past made me realize that it is not only a monument to Berlin-Mitte’s emblematic history, but also an attractive location for a leading public policy and international affairs school.

Since the 18th century, when King Frederick I of Prussia edified the avenue, Friedrichstraße has been among the more exclusive residential addresses of Friedrichstadt, which was back then a rather sleepy suburb of Berlin. His successor, Frederick II of Prussia, then commissioned to further extend the avenue, to serve as the central axis between the north and south of Friedrichstadt. By royal order, house-owners on Friedrichstraße were required to build their houses in blocks, many structures of which still (or rather again) exist today. While at first being a calm district for the wealthier citizens of Berlin, Friedrichstraße quickly became a representative site of German history. For example, only an inconspicuous sign on the school’s building reminds us of the last barricade of the 1848 German March Revolution taking place just an arm’s length away. The result of the liberal uprising was the first Prussian monarchist constitution, which established an elected bicameral legislature.

With the passing of the years, Friedrichstraße witnessed the foundation of the German Empire in 1871 as well as the designation of Berlin as its capital. In the following years, the avenue came to particular prominence, not least due to the close proximity to the Hohenzollern residences at Unter den Linden. Especially banks and large insurance companies settled along the avenue, creating a financial and commercial hub near the power centre of the empire.

As house and lot prices shot up, more so after the turn of the century, Friedrichstraße became an exclusive address for representative buildings of Germany’s most successful businessmen. Following the trend of the times, the large insurance company Allianz commissioned a building on the corner of Mohrenstraße and Friedrichstraße as an extension of its already existing office properties on Mohrenstraße. The first part of what was envisioned as a monumental representation of the company was finished in 1937. Yet, with the outbreak of the Second World War, further construction on the building was interrupted. As with many other buildings along Friedrichstraße the half-baked edifice was left in ruins.

As the war ended and Berlin was divided, large parts of today’s Berlin-Mitte, including much of Friedrichstraße, were assigned to the Soviet sector. The destroyed Allianz building was handed over to the GDR’s Domestic and Foreign Trade Corporation (DIA), one of the GDR’s main organs for imports and exports. It was subsequently reconstructed in line with the GDR’s preference towards more simplistic facades, despite it being one of the rather luxurious buildings of East Germany. In the following years, the grand complex became one of the most representative locations for the GDR’s commercial activities.

Since 1998, the building complex at Friedrichstraße 180 is under monumental protection. With large investments by the Zurich Financial Services Group, renovations and modernizations took place to re-establish the complex, today named Quartier 110, as a central hub for commerce and idea trading in one of Berlin’s prime locations, “By reason of the excellent location and equipment the office space is particularly suited to executive services such as financial services, consultants and opinion formers from corporations and business.” It is not surprising that a financial heavyweight like Deutsche Bank or a renowned research centre such as the German Institute for Economic Research (DIW) prefer a location so close to the lungs and heart of German and European policy-making – a short 20-minute walk to the Parliament, five more to the Chancellery, as well as immediate proximity to several federal ministries. At the same time, important events such as the talks of the Association for Economic Discussion (Berliner Wirtschaftsgespräche) or the business talks of ZeitForum Wirtschaftsgespräche have repeatedly been hosted in the historic culture hall of Quartier 110.

Because of its unique location, the building at Friedrichstraße 180 is therefore a monument to Berlin’s emblematic past, having shaped the city uniquely. But more importantly, during its 80 years of existence, a legacy has been created around the building as a meeting point for the most influential opinion-makers. What happened within its walls contributed to the flourishing of Berlin-Mitte, changing Friedrichstadt from a sleepy suburb to one of Berlin’s most vibrant and intellectual neighbourhoods. And while  Quartier 110 may not seem like the typical university environment at first sight, it is very much the ideal place for the Hertie School; surrounded by those who wish to offer innovative solutions for tomorrow’s challenges, and close to those who shape today’s opinions. As a leading public policy school, the Hertie School does not only benefit from the building’s legacy, but is integral to further contributing to it. 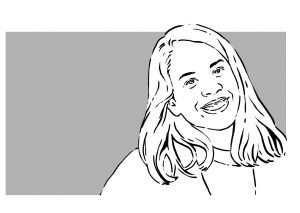 Hannah Hückstädt is a class of 2019 Master of International Affairs candidate at the Hertie School of Governance. She graduated from Maastricht University holding a LLB with Honors in European Law. She has worked in EU diplomacy and public administration. Her research interests include EU Governance, EU-transatlantic relations as well as human rights and governance issues in Latin America.