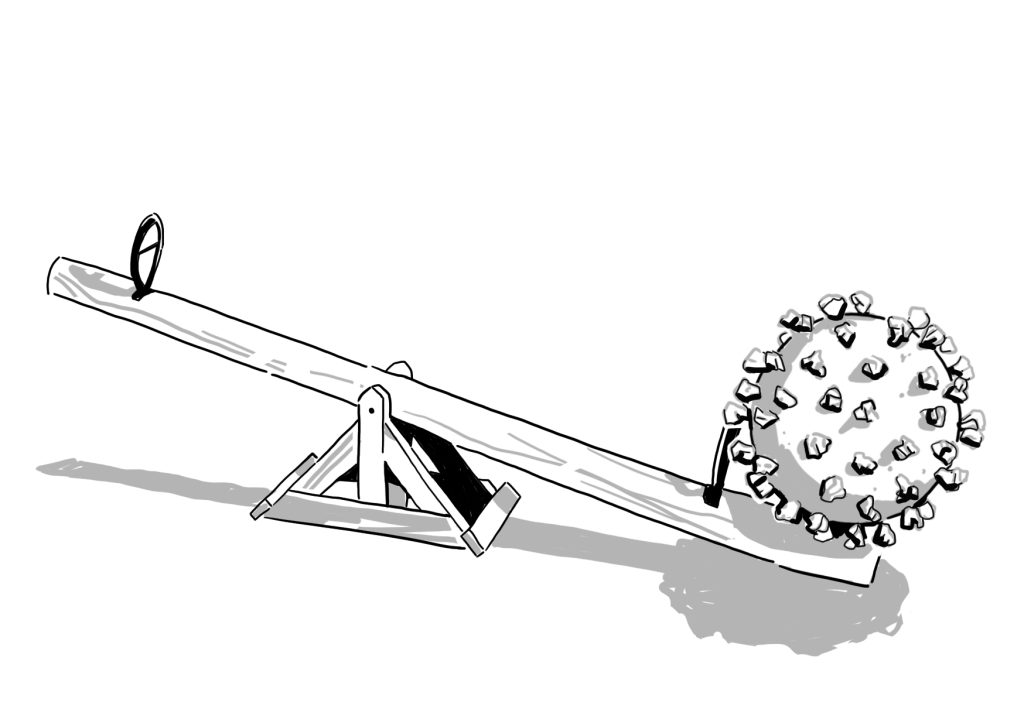 In late-2020, a request for the temporary suspension of COVID-19 patents was submitted to the WTO. Today, some countries are still resisting the waiver. Milad Tabesch and Robert Schirmer examine the narratives exacerbating the global imbalance between North and South that prevent a global response to a global pandemic.

On 12 April 1955, church bells rang out all afternoon and evening across the USA and people embraced in celebration. It was the day Dr Jonas Salk developed the life-saving vaccine against polio. In his first network-TV interview, he was asked “Who owns the patent on this vaccine?”

“The people, there is no patent. Could you patent the sun?”, he answered.

Today, countries such as the UK, Norway, Switzerland, and some EU member states are trying to block the waiver on sections of the World Trade Organization’s (WTO) Agreement on Trade-Related Aspects of Intellectual Property Rights (TRIPS) for COVID-19 vaccines. These countries point to different reasons and circumstances that do not allow a waiver – they even depict it as dangerous. One year after South Africa’s and India’s call for a release of the patents, it is time to question the narratives that, to put it in Salk’s words, seem to have patented the sun.

1. Patents are not a barrier to scaling up the production of COVID-19 vaccines

In April this year, the European Commission claimed that lifting patents is not a way forward and pointed out that sharing intellectual property rights (IP) would not immediately speed up manufacturing vaccines.

This, however, contrasts with 2015 studies on papillomavirus, rotavirus, and pneumococcal vaccines which show that manufacturers are not hampered by a lack of manufacturing and technological capability. Rather, transnational claims to IP impede new manufacturers from entering and competing, especially vaccine manufacturers in developing countries. The same dynamics are playing out today with COVID-19. Marguerite Massinga Loembé and John N. Nkengasong have further showcased how African countries consequently have little incentive to support local vaccine producers due to vaccine patents.

2. Patents are a driving solution to overcome the current COVID-19 Crisis

Following the EU Commission, German Chancellor Merkel has also rejected the suspension of patents. A German government spokeswoman argued that waiving patents would harm future innovations and stressed the impact of manufacturing capacities.

However, the UN Committee on Economic, Social, and Cultural Rights emphasised that sharing the best scientific knowledge is crucial in mitigating the impact of disease. Their statement reveals IP should always serve human well-being; it is not an end in itself. State partieshave a duty to prevent IP exclusivity and create access to essential medicines.

Despite the underlying assumption that scientists and researchers are only capable of producing life-saving vaccines if they are granted the prospect of absurd profits protected by patents, there are international treaty exceptions that could apply in the event of, say, a global pandemic:

Article 9 of the Marrakesh Agreement, founding WTO document that applies to all its member states, declares: “In exceptional circumstances, the Ministerial Conference may decide to waive an obligation [of] this Agreement […].”

The 1955  polio vaccine waiver was not a historical exception. During the Second World War, there was a desperate need for access to the newly discovered antibiotic penicillin. These high demands were only able to be met through sharing patents.

3. Hail to the market

Some argue for market-based incentives like patents to spur innovation, which ignores the fact that billions of Euros of public money have funded research, development, and delivery of COVID-19 vaccines and other health technologies. A study found that 97.1% to 99% of Oxford-AstraZeneca’s vaccine research and development funding came from public money and philanthropic sources. Johnson & Johnson received €820 million, BioNTech was awarded €375 million in 2020 alone, and Moderna obtained up to €2.14 billion from their respective national governments.

Moreover, by providing a guaranteed market, investments of pharmaceutical companies got de-risked even before their vaccines were proven to be safe and effective. Mariana Mazzucato identifies markets through mass production and the IT revolution, as “two examples where governments made direct investments in technologies and then formulated bold policies that allowed these technologies to be fully deployed throughout the economy.” COVID-19 Vaccine development was incentivised by government institutions and efforts.

4. The Global South does not have the pharmaceutical means to produce vaccines

Countries in the Global North like Germany seem to ignore the fact that increasing the number of vaccine manufacturers by lifting the patents is a sustainable way to ensure sufficient and equitable distribution of vaccines, and ultimately save lives. Technology transfer would allow African manufacturers to build their domestic production capacity and ensure that profits are not exported to the Global North, as seen in many fill-and-finish arrangements between African institutes and vaccine manufacturers.

African leaders are determined to create vaccine manufacturing capacity inside the continent: they aim to lift the share of vaccines produced in Africa from 1% in 2021 to 60% by 2040. This move coincides with Moderna’s announcement to manufacture Messenger RNA (mRNA) vaccines in Africa. In March, the Foreign Policy journal highlighted domestic production capacity in three African countries (South Africa, Senegal, Egypt) for mRNA vaccines which are fast and easy to produce, and versatile for virus mutants. Three companies have reached agreements with different vaccine producers for mostly applying the “fill-and-finish” process. An issue with these partnerships is their extractive nature: Aspen shipped up to 20 million J&J doses to Europe in August despite the massive scarcity in Africa. Nonetheless, the existing partnerships also show that African COVID-19 vaccine exports are feasible and desirable.

Relinquishing IP is the key to increasing the supply of vaccines and breaking up vaccine monopolies. The alleged lack of adequate production factories and know-how in the Global South is a myth.

5. The Global North wants to assist the Global South altruistically with vaccine supply

By the end of September 2021, only 4.4% of the population on the African continent had been fully vaccinated, compared with about 62% in the EU. Some state leaders, and pharmaceutical companies against a patent waiver emphasise the redistributive effect of COVAX.

COVAX delivered 341 million vaccine doses to over 140 countries as between late February and early October 2021, barely enough to cover 5% of the target population. While the program only focuses on procurement and delivery of vaccines, the TRIPS waiver would cover a broader range of health products and technologies needed for an adequate response.

Policymakers tend to overlook the fact that COVID-19 exposes the gap between the self-proclaimed “generous” Global North and the Global South, which is rooted in (post)colonial power relations. This aid program is helpful but continues to replicate these imbalances.

A group of scholars who appeared in the British Medical Journal go so far as to call Western aid ‘apartheid models’. According to them, “vaccine apartheid is only one symptom of broader global health inequalities that have their roots in colonialism and persist today because of neo-colonial forms of power.” The core idea of distributing vaccines through the COVAX programme perpetuates the colonial logic of “charity” that prevents a progression toward “reparative justice”. Framed in the neoliberal model of postcolonial aid, the “stronger” North graciously extends its arm to the “poor” and compromised Global South. To overcome this dangerous development, waiving the patents could imply breaking free from exploitative power dynamics.

The current global vaccine distribution maintains massive leverage for pharmaceutical companies in the Global North at the expense of human lives. Narratives coming from the Global North rest on shaky grounds, and the issues must be publicly debated.
The transition away from old aid strategies towards unbiased reprioritisation can set the beginning toward a more just global health system. The legal framework is in place and the global state of alert is more severe than ever, so, to use the words of the EU Commission President we must remember that “no one is safe until all of us are safe.”

Milad is currently studying for a Master of Public Policy at the Hertie School. He holds a Bachelor degree in European Studies and Law. A self-defined utopian realist, Milad enjoys debating big ideas on long walks on how people’s lives can be made more fulfilling. Outside of his studies, he is passionately advocating for the European idea.

Robert is a Master of International Affairs candidate at the Hertie School and is currently a project management intern at CRISP. He holds a bachelor degree in Politics and Sociology from the University of Wuerzburg, where he focused on conflicts in the Middle East, political culture in Germany, and migration. His thesis focused on educational policies in East Jerusalem. Robert is also a seminar teacher at Understanding Europe Germany. He is most interested in peace and conflict studies, social policies, and postcolonial theories.