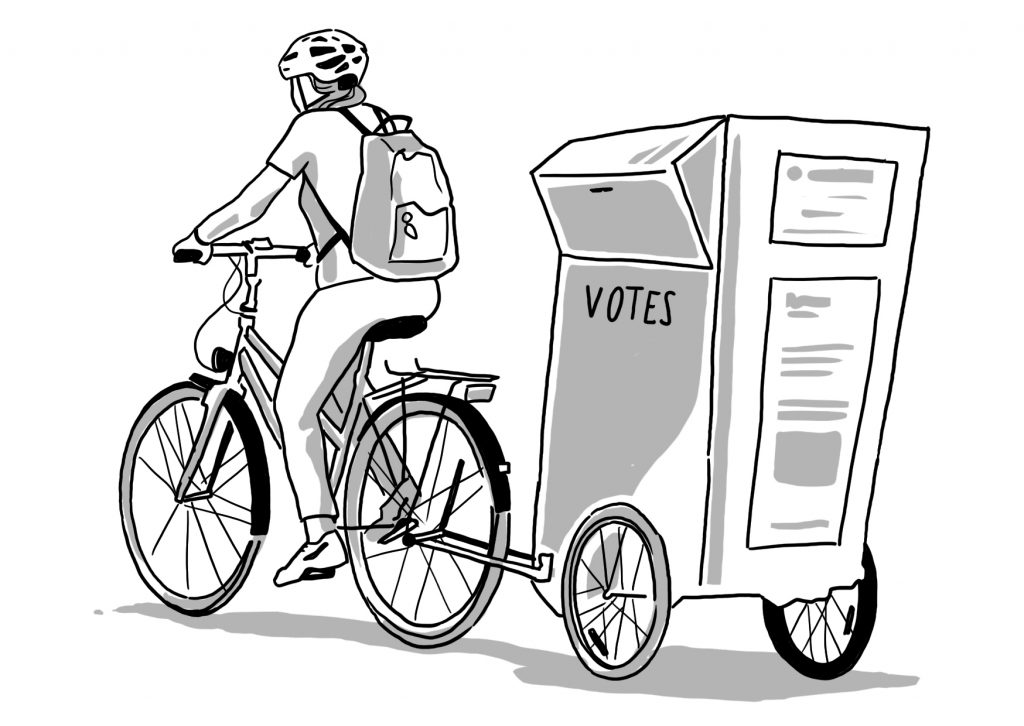 As people around the world worked to stay safe through COVID-19 lockdowns, many took to two-wheels, biking around their cities. Demand for bikeshare programmes increased in cities across the globe from Wuhan, China to Chicago and Philadelphia in the United States from March 2020 onwards while 133 German cities created pop-up cycling lanes to increase social distancing and maximise outdoor space. In many cities, car traffic plummeted during the pandemic, creating space for cyclists to feel safe on roads they otherwise wouldn’t. This was definitely the case for me as I started biking around Manhattan and Brooklyn, previously terrified of cars and trucks. Project for Public Spaces, a think-tank focused on community engagement, argues that “cities should treat public spaces as what they are: fundamental building blocks of our health, social resilience, and democracy.” This has never been more prescient as COVID-19 has forced outdoor public spaces to be the venue of more activities than ever before.

While this uptick in biking could be a COVID-19 fad, biking groups were gathering strength in numbers even before the pandemic and perhaps this has only contributed to their growing presence. As the global economy yo-yos between depressions and pandemic uncertainty, cyclists are coming together as voting blocs. Their demands for public investment in cycling infrastructure and policy encourages community engagement, placemaking, and combats inequitable legacies of segregation and pollution.

Economically, increased cycling in urban areas is a self-perpetuating economic stimulus. A 2019 pilot programme in Toronto removed 136 on-street parking spots and installed a bike lane. Researchers not only found no negative economic impacts associated with the bike lanes, but monthly customer spending and the number of customers both increased along that street using a case–control and pre–post surveys. This study is further bolstered by an analysis of 14 cycling corridors in six cities across the United States and concluded that the installation of cycling lanes either had “positive or non-significant impacts on sales and employment.” This counters a commonly held antiquated view that business will suffer if it is less convenient to cars and parking access. In addition to that, a Norwegian study found that the benefits of investments in cycling infrastructure, if including the improved health benefits of more walking and cycling are estimated to be worth at least 4–5 times the costs. Thus, it is on cities to incentivise the high levels of cycling that materialised throughout the pandemic and prioritise cycling safety, if they want to maintain the economic benefits cyclists can bring.

In Berlin, Changing Cities successfully advocated for the Mobility Act, a legislative bill that passed in 2018 and aims to create protected cycle paths on all main roads. Changing Cities has a Germany-wide coalition entitled #BundesRad that is campaigning for prioritised infrastructure funding for foot, bicycle and public transport. BundesRad demands seamless infrastructure alternatives to motorised vehicles, as well as increased safety structures to prevent traffic fatalities.They also advocate to discontinue diesel subsidies and internalise the carbon/pollution costs of private motorised vehicles through taxes. Further, CDU/CSU politician Gero Storjohann officially founded the German parliamentary group on cycling with a coalition of delegates from the B90/Grüne, SPD, Die Linke, and FDP parties in October 2018. While the Parliamentary Circle on Cycling aims to represent cycling issues in the Bundestag, their founding speeches are centered on the economic power of bicycles and cycling-based tourism. This discourse is also, however, a missed opportunity, as it fails to address the potential of bike infrastructure to further environmental and racial justice.

In New York, a grassroots movement led by Transportation Alternatives has started a campaign entitled #bridges4people to convert one car lane in each direction on the Brooklyn, Manhattan, and Williamsburg Bridges into a bike lane. They argue that this would decrease congestion and increase safety for pedestrians, cyclists, and incentivise more cyclists. This campaign, while it may sound trivial at first, incorporates environmental justice and prioritises the working class of New York City.  The median income of car-owning households in New York City is $85,000, while the median income of households that do not own a car is $40,630. Communities of colour and low-income communities in the U.S. are also disproportionately likely to suffer from increased rates of asthma and other health problems caused by pollution. Creating incentives for cycling would decrease air pollution and encourage transitions away from personal vehicles with high carbon footprints. Given that the transportation sector accounts for 30% of New York City’s GHG emissions and over 40% of greenhouse gas emissions (GHG), this would be a considerable gain for public health. Quality of life would also improve, given the decrease in noise pollution and safer streets that will allow more children and families to spend more time outdoors. The existing New York transportation and cycling safety plan, Vizion Zero, has been criticised extensively as at least 200 people have been killed in traffic violence in New York City since January 1, 2020 and Mayor de Blasio just slashed funding for this programme.

These programmes and campaigns are not isolated to Berlin and New York. Initiatives like Oakland’s “Slow Streets” and Bogotás’ Quinto Centenario project are other potential urban policy initiatives that model alternative transportation landscapes of cities, forefronting sustainability, public health and equitable community-accessibility as priorities. Every Sunday since 2014, Bogotá has a city-wide ‘Ciclovía’ closing 120km of city streets, transforming roadways into public play and recreation spaces, changing how residents interact with the city. Bogotá, Durban, and Mexico City are the first three cities to receive technical assistance from the C40 Cities Climate Leadership Group for climate change mitigation and resilience projects to develop cities’ sustainability priorities, like addressing imminent mobility challenges and prioritising cycling. Meanwhile, the European Cycling Federation has culled a database of cycling policies of all European countries. The EU has compiled best practice reports and cycling policies as a guide for low-carbon cities  – varying from infrastructure design and investment, to implementation, education, and public awareness and safety campaigns.

With more accessible policy research and building momentum, it is imperative to keep an eye on the Congressional Bike Caucus in the United States, the All Party Cycling Caucus in Canada’s Parliament, as well as bike caucuses across the globe. From the municipality level to national elections, constituents are demanding change, or threatening their vote go elsewhere. New York City Council Representative Carlos Menchaca, and 2021 candidate for New York City Mayor, tweeted: “let’s grow the bike caucus in the @NYCCouncil – who’s with us?”

The answer seems to be a populace that is growing daily, asking for changes to existing transportation, labor, and sustainability systems and holding their elected officials accountable to these promises. With upcoming elections, cyclists’ voices as voters have never been louder.

Ally Tucker is a candidate for the Masters of International Affairs at the Hertie School of Governance. Born and raised in New York, she has previously worked in communications at an international non-profit focusing on transitional justice and she is interested in sustainability and environmental justice. Ally has a B.A. in American Studies from Carleton College and she enjoys eating fermented foods, playing frisbee and hiking.