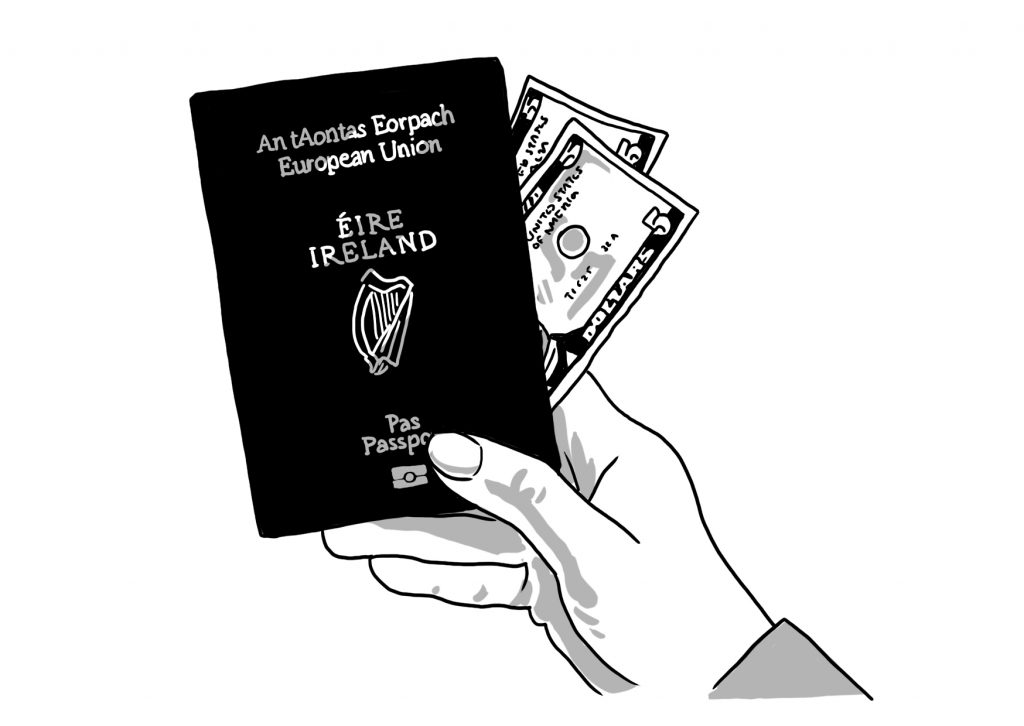 In just three hundred years, more than ten million people emigrated from Ireland, a figure that doubles the nation’s current population. For most of the 19th and 20th centuries, when Europe was marred by upheaval and war, Ireland had the highest rate of emigration in the continent. Today, Ireland is one of the few countries in the world with a smaller population in 2020 than in 1820.

A brief glance at Irish history dispels any confusion about why this happened. Following a series of plantations, oppressive 18th-century penal laws excluded Irish Catholics from nearly every facet of civil society. They were forbidden to participate in parliament, have legal custody of their own children, or attend Catholic services. Punishments imposed by British colonists were severe, with priests facing the death penalty for performing services. Forced internal displacement saw mass land confiscations, leading to impoverished conditions and overreliance on a single crop, the potato, for the majority of the nation’s sustenance.

These conditions boiled to a tragic brew in 1845 when the Potato Famine hit Europe. In just five years, one million people, 12% of Ireland’s population, had died. Another two million people left the island as famine refugees, planting their roots in North America, Britain and elsewhere. Rearing families abroad, their family trees grew branches that soon spanned the entire globe. Poor economic conditions in the recently emancipated Irish Free State in the 20th-century saw another peak in emigration. Historians have noted that the extent of migration was so high in the 40s and 50s that numbers were “reminiscent of the 1850s.” Globally, more than 70 million people today claim Irish ancestry. Given that the current population of the Republic of Ireland rests at a cosy 4.9 million, this number is almost amusingly large.

The economic boom of the early 2000s, dubbed the Celtic Tiger, saw a flux of immigration to Ireland for the first time in the nation’s history. I was in primary school at the time. Migrants flocked to Ireland from Eastern Europe and other regions and in my class there were girls from Poland, Vietnam and Guatemala. They were still a significant minority and the overwhelming whiteness of my childhood never occured to me.

Meanwhile, a movement was growing in the nation to keep migrants out. After a surge in the number of asylum applications in the late nineties, the Direct Provision system came into being in 2000, in all its steely apathy. Direct Provision is a system that purports to provide for those in need of international protection while their asylum applications are being processed. It has been described by the New Yorker as “perhaps unique in its daily cruelty.”

Currently, more than 3,000 people are housed in overcrowded, prison-like residences across the country. The ‘homes’ are outsourced to private contractors and run for a profit, creating a multi-million euro industry. Scandals about living conditions are a regular sordid drip in the Irish media. This summer, one centre in Kerry received national scorn for rationing water to just one litre per person per day, leading residents to hunger strike for better conditions.

Reports of inhumane conditions are widespread. Bread has been refused to a sick child in Knockalisheen, cockroaches caused skin conditions in a Monaghan centre, and various reports of domestic abuse.

Asylum seekers spend on average 10-24 months living in these centres, with some enduring these conditions for 12 years. While in the system, residents are not allowed to work, hold a driver’s license or receive social welfare beyond a minuscule €38 weekly allowance. This allowance has to stretch to pay for menstrual products, school materials, and often food when the meals served are nutritionally devoid. The Royal College of Physicians of Ireland documented that 92% of Direct Provision residents in rural Ireland have had to buy extra food.

Residents are further ostracised by geographical poverty. Although some centres are located in city centres, many are placed in rural areas, not served by public transport. As a result, asylum seekers face hours-long walks to local towns. The alternative is paying hefty taxi fees, an unreasonable option on their meagre allowance.

In a country with a high GDP, low unemployment, and a relatively sparse population, it must be asked how a system as dysfunctional as this came to be? According to a government spokesperson, the system of Direct Provision was deliberately designed to make Ireland as unattractive an option as possible for asylum seekers. In this regard at least, it is successful.

Twenty-seventh amendment
Beyond the asylum sector, the nation fares little better on migrant policy. Until the early 2000s, Ireland granted the right to citizenship to children born in the country, regardless of the nationality of their parents.

In 2004, the year I started school, a referendum revoked the right of Irish-born children of immigrants to citizenship. This policy has seen the deportation of members of the national community who have never known a home but Ireland. Since the outbreak of COVID-19, the government gave out 469 deportation orders, according to one Teachta Dála (Member of  Parliament).

As in many high-income countries, the immigration system disproportionately penalises migrants from less wealthy ones. First-generation immigrants who moved to Ireland in search of stable livelihoods are cast to a transitive existence, not knowing when the deportation letter may arrive. In February 2020, a ten-year-old child who spent his life in Ireland lost his appeal and was deported to Nigeria.

Meanwhile, the post-Brexit aftershock has seen a cascade of UK citizens applying for Irish passports through ancestral routes. In 2019, 94,000 people in the UK applied for Irish citizenship. Most of these applications will be granted. The blatant racism of Ireland’s immigration policy is highlighted by this hypocrisy. Many of the people applying for Irish citizenship from the UK have no intention of living in Ireland. They are applying to continue enjoying access to the open-market and to live in other EU states after Brexit. This is, of course, their right and it should not be condemned.

Systematically, however, this government practise poses a serious moral problem. Deporting members of the national community (largely to low-middle income countries) while granting citizenship to floods of UK high-earners with no plans to live in Ireland is simply unjustifiable.

EU immigration and national sovereignty
It is worth noting that the right to citizenship for nationally born children of non-nationals is by no means a guarantee in many EU countries. Although EU citizens can travel freely between member-states, this right does not extend to non-EU citizens. Immigration policy differs from state to state as countries are granted the “sovereign right to control the entry and continued presence of non-nationals in their territory.”

This right to sovereignty on the continued presence of non-nationals is what enabled Ireland to enforce its restrictive immigration laws. Moreover, the country’s position as an island nation in the north of Europe meant that it was not significantly hit by the influx of refugees during the peak of the crisis in late 2014. Although this right to citizenship for nationally born children is not EU-wide, the revocation of the right is unusual.

At best, the twenty-seventh amendment is bizarrely regressive. At worst, Ireland’s immigration system is the symbol of a nation that has forgotten its history, replacing the memory with a structural racism it was once itself the mercy of. As historian Edna Delaney observes, “until the 1990s, virtually every person growing up in Ireland knew that the day might come when they have to emigrate.” Emigration is an act of hope. Ireland, of all countries, should remember this.

Sinéad Barry is a 2022 Master of Public Policy candidate at the Hertie School. She holds a Bachelor’s degree in English literature and Philosophy from Trinity College Dublin, where she specialised in creative writing. Sinéad has previously worked as a journalist and is interested in migration issues, gender equality, and climate justice. She loves to read, walk, and wear excessively colourful jumpers.