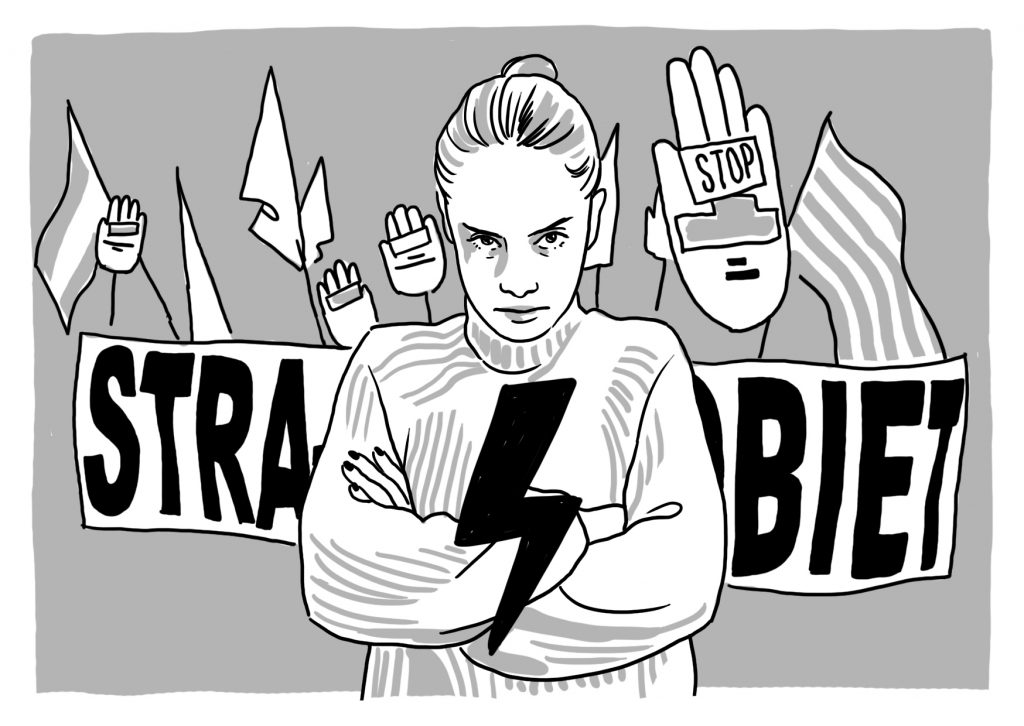 In 1930, writer and physician Tadeusz Boy-Żeleński referred to Poland as “Women’s Hell” in his titular essay, criticizing the country’s harsh laws when it came to women’s access to contraception and abortion. Ninety years have passed since then and Poland has once again become one of the most restrictive European countries when it comes to women’s reproductive freedoms.

History proves that Polish abortion laws are subject to change

The prevailing draconian reproductive laws have been a development of just the past 30 years. Poland, under the communist system, considered gender equality a given and abortion was therefore legal, with the majority of society not questioning its legality (though it should be pointed out that its decriminalization did not necessarily equate abortion with being a women’s “right”). In practice, however, the Polish social structure remained patriarchal in nature, with women placed firmly in their traditional gender roles as ‘mothers’ and ‘caregivers’. The collapse of the Soviet bloc exposed a “passive genesis of abortion under communism, lack of a rights-based approach and traditional values” and it became much easier for conservative parliamentarians – supported by the ever-present Catholic Church – to pass a bill banning abortion under specific circumstances in 1993. Since then, there have been several unsuccessful attempts at liberalizing the law.

The role the Roman Catholic Church played in the criminalization of abortion cannot be overstated. In the 1970s, a religious resurgence took place, resulting in national movements preaching anti-choice rhetoric and ‘traditional’ family planning. After the deterioration of the communist bloc, the Church used this period of transition to spearhead a pro-life campaign, including religious education in schools. The influence the Catholic Church exerted led to them being dubbed a ‘protector’ of the new Polish nation, inevitably tying together national identity and the Church. This has caused the Catholic Church to not only shape the political sphere but also the minds of Polish citizens. However, despite its political influence, its moral authority has been in decline, as new generations of Poles reject the Church’s conservative stance. This can be seen in the large gap between younger and older generations about the importance of religion in their lives, as well as a decline in the attendance of church services.

In comparison to their neighbours in Eastern Europe, Poland’s more conservative values are not an anomaly. Still, when taking into consideration other EU member states, Poland clearly adheres to more old-fashioned gender stereotypes and a conventional view of family. According to a 2015 Eurobarometer survey about gender equality, just 46% of Polish citizens ‘totally agreed’ with the statement that gender equality is a fundamental human right and only 37% completely agree that tackling inequality between women and men is necessary to establish a just society. Though the struggle for political and legal changes is still fraught with obstacles, Polish women’s rights movements have been actively challenging these ideals.

The 2020 election has revealed that it is also a deeply divided country, with the current government winning 51% of the vote. The current anti-choice government, Prawo i Sprawiedliwość (PiS or Law and Justice Party) won parliamentary and presidential elections in 2015 with conservative stances on issues such as gender equality, LGTBQ+ rights and in vitro fertilization.

As Covid-19 continues to disproportionately impact women worldwide, the Polish government is abusing the crisis as a means to further infringe on women’s fundamental reproductive rights. The Polish Constitutional Tribunal, closely linked to the ruling party, ruled on the 22nd of October that abortions in cases of severe foetal impairment are unconstitutional, another striking blow for Polish women. Accountability is key to scaling back the gendered impact of Covid-19, and Poland should not be an exception.

It is no secret that abortion laws in Poland are outdated and among the most restrictive in the European Union. A staunchly Catholic country, abortion was intially only permitted under severely limited circumstances: when the pregnancy results from a crime, in which case abortion is permitted for the first 12 weeks of pregnancy, in the case of an acute and irreversible foetal impairment or if the pregnancy endangers the life of the mother. Now, even in cases of foetal impairment, abortion access may be further constrained by the ruling of the Constitutional Tribunal. These restrictions not only severely limit a woman’s right to choose but also cause issues when it comes to ‘legal’ abortion access. The “conscience clause”  leaves Polish women in more remote areas stranded with no one willing to perform the procedure. This clause enables doctors to decline performing abortions if it conflicts with their personal beliefs, with many medical professionals even signing a “Declaration of Faith” that puts religious beliefs above state law. Even emergency contraception such as the morning after pill requires a prescription from a physician.

This lack of accessibility goes hand-in-hand with the routinely abysmal, misinformative and non-obligatory sex-education taught in Polish schools, which often does more harm than good. Poland’s conservative new education minister is a proponent of traditional family values and opposes LGBTQ+ ‘ideology’, as well as supporting the “family life education” that currently exists in place of sex-ed. This ‘education’ focuses on reinforcing stereotypical gender roles, does not mention sexual orientation and discourages the use of contraception. Poland’s Ministry of Health has done little to mitigate the problem – if anything, they are actively contributing to it. Not only have they consulted with anti-choice activists, but they have financially supported the preparation of  ‘toolkits’ full of misinformation about sexual activity and pregnancy. These include youth-targeted programs like “W stronę dojrzałości”, which roughly translates to  “Towards maturity”. This program consisted of several inaccuracies, such as birth control being physically and mentally damaging, therefore making natural family planning the only way to go.

One of the issues exacerbated by the current crisis is that of access to abortion abroad. Due to border closures, women seeking to travel abroad for an abortion have been unable to do so. Already an expensive and time-consuming undertaking before the crisis, the additional uncertainty has and will continue to affect the lives of countless Polish women. The initiative Abortion without Borders, founded just before the start of the pandemic, has been actively utilising their European network in order to help those in need of assistance, with some success. The charity Aborcyjny Dream Team also cites increased concerns by Polish women about not being able to obtain medication for a pharmacological abortion, the sale of which is illegal in Poland, thus creating a reliance on foreign networks and aid. The effects of the new ruling are already beginning to take effect, as hospitals in Poland have begun turning away women that had already booked appointments, leaving them distraught and vulnerable.

In 2016, women took to the streets after the right-wing Law and Justice party, headed by President Andrzej Duda, attempted to pass a new law that would effectively ban abortion entirely. It would punish women by imprisoning them for up to five years, as well as targeting the doctors that perform the procedure. The ‘Black Monday’ strike organized by Polish women was enough to halt the passing of the bill, with party leaders withdrawing their support for the change in law.

However, in April of 2020, amidst the Covid-19 crisis, Poland’s government once again reviewed retrogressive bills that would jeopardize the well-being and lives of women and adolescents. These included a ‘Stop Abortion’ bill eliminating access to abortions in the case of fetal abnormalities and the ‘Stop Pedophilia’ bill targeting “anyone who promotes or approves the undertaking by a minor of sexual intercourse or other sexual activity”, oftentimes teachers and sex educators. For now, this bill has been sent back to the committee for ‘further work’, which still leaves open the possibility of it being brought back to the table at a later date.

Both of these bills were introduced as a result of a citizen’s initiative, which has to be signed by more than 100,000 Polish citizens. Kaja Godek, the woman behind this project, has even stated that “abortion is a pandemic worse than the coronavirus”. The bills were drafted and supported mainly by right-wing groups such as the Ordo Iuris Institute for Legal Culture, which espouses both pro-life and anti-LGBTQ+ values. Although just under 50% of the population support the current abortion laws, the ruling PiS have not given up on proposing even stricter laws – which is why the timing of the abortion bill was also widely contested by activists and protesters, whose activities were somewhat limited due to Coronavirus safety measures. The intersecting point of the pandemic and the introduction of these antiquated bills played right into the hands of PiS and their close confidante, the Catholic Church. The recent decision by the Constitutional Tribunal further emphasizes the urgency of the situation. Thousands of women poured onto the streets once again, defying government bans on public gatherings.

Authoritarianism has been on the rise long before the pandemic, but governments like President Duda’s have been able to utilise the fallout from the coronavirus to hollow out democracy and further their own agenda. This is apparent not only in their push for harsher abortion laws, but also in their introduction of the controversial law allowing for the punishment of judges that disagree with the government’s judicial reforms. This has led the European Commission to launch an infringement procedure against Poland, citing a violation of the primacy of EU law. Despite these actions, the Law and Justice party has continued its efforts to exert control over the judiciary, media and civil society to prevent a rise in opposition power.

Under international and European human rights laws and standards, the EU has a responsibility to respect and protect women’s sexual and reproductive health and rights. The European Court of Human Rights has even issued judgements that denying access to abortion in a timely manner is a violation of women’s rights, underscoring the need for reforms in Polish abortion law. It has become clear that the disparities that exist between EU members on this topic are widening with the rise in right-wing governments. EU member states have to come together in solidarity and uphold European values regarding gender equality, and urgently take action to ensure the well-being of Polish women.

Rolling back sexual and reproductive rights is just one part of the Law and Justice’s agenda, but it is one of its most significant in the larger scheme of Polish women’s rights. The ruling that abortion in cases of a foetal defect or fatal illness is unconstitutional will effectively ban the procedure and severely risk women’s mental and physical health. This decision, as well as the proposed plan to withdraw from the Istanbul Convention, all contribute to this agenda. The rights of women in Poland cannot be further trodden down and diminished. Though the long-term effects on women may only become apparent in the years to come, this cannot be an excuse to allow lapses in human rights to continue in the present. The EU needs to hold their members accountable in this time of wavering democracy.

Katrin Hermann is a 2021 Master of International Affairs student at the Hertie School. She has an international background and completed a bachelor’s in European Studies at Maastricht University. She has experience in sales research, marketing and PR. Her areas of interest include the intersection of international development and education, with an emphasis on the empowerment of women and girls. In her free time, she enjoys painting, skating at Tempelhofer Feld and traveling.