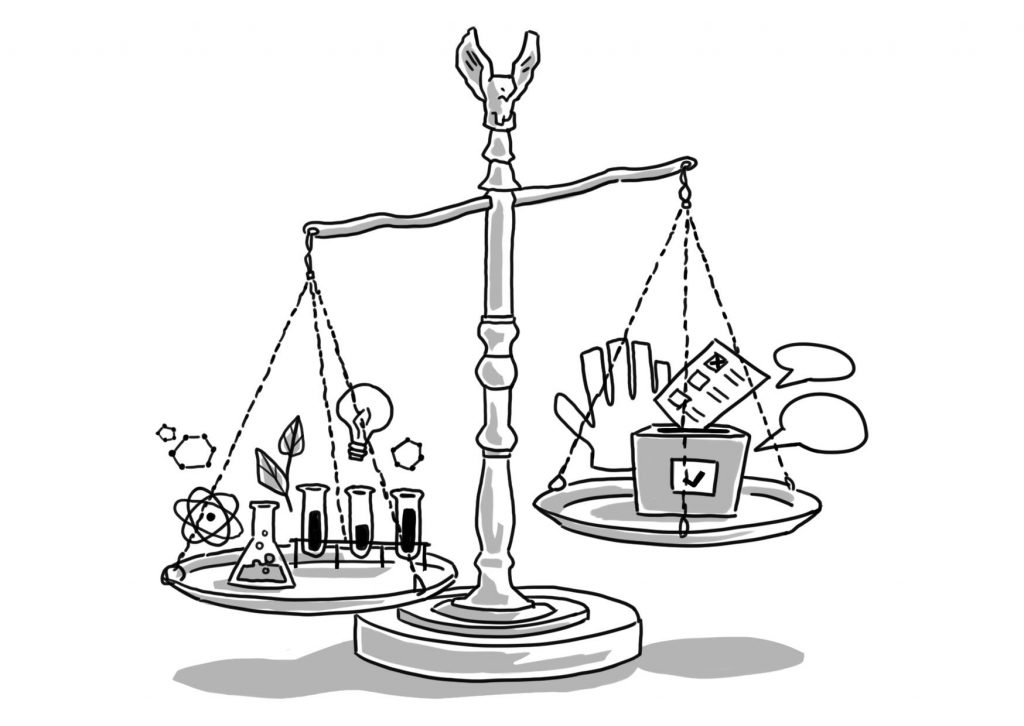 Raging forest fires, receding glaciers, or starving polar bears: scientists paint a bleak picture of our planet’s future that might challenge the survival of the human species. Despite this terrifying forecast, liberal democracies in particular struggle to enforce vigorous climate policies. Can systemic change away from liberal democracy save the planet?

“Climate change is bigger than democracy”, proclaimed the contentious Extinction Rebellion (XR) co-founder Roger Hallam last year. Democratic institutions and liberal markets are increasingly framed as part of the problem rather than the solution to climate change. Indeed, the ambitious climate goals of Western liberal democracies on paper seldom materialise. Similarly, “greenwashing” has allowed environmentally destructive corporations to pay out of their responsibilities. Consequently, democracies systematically fail to impose the desperately needed constraints on themselves that could mitigate the climate crisis despite their long-held knowledge of its irreversibility, severity, and imminence. We can reasonably ask why, and under what conditions, that might change. For instance, how would an alternative regime fare?

“We need a more authoritative world”, asserts renowned British scientist and originator of the Gaia hypothesis James Lovelock. “In times of crisis, you’ve got to have a few people with authority who you trust who are running it”. Embracing this thought experiment, we might argue that for solving the problem of lengthy, multi-stakeholder deliberations unfit to produce effective policy outcomes for individualist, free societies, we need a stronger, more rapidly and unitarily acting government. Could authoritarianism solve the climate crisis?

Ecologically motivated authoritarianism is no newbie to the environmental governance discourse. The regime-change based view flourished under the impetus of the formative 1970s green movements. Faced with overpopulation, natural resource depletion, and ecological degradation, the 1960s saw the rise of (Neo-)Malthusianism. Contending that overconsumption will lead to a catastrophe, (Neo-)Malthusians seek to bring human action within ecological limits. In its most radical form, these views advocate for an authoritarian central government to successfully enforce approaches addressing the climate crisis. These ideas led American scholar and ecologist William Ophuls to coin the term “Eco-Authoritarianism”.

The underlying idea is rather simple: scientists and technocrats are empowered to steer state policy. Public participation is vastly restricted while uncorrupted “eco-elites” formulate and implement policies based upon uncensored and scientifically correct knowledge. They are trusted to create rapid and comprehensive responses to the climate crisis. Since the 1970s, Eco-Authoritarianism has been widely discussed as an alternative to the current system. Initially modelled after the Soviet Union, today’s Eco-Authoritarians are largely inspired by China. They champion the idea of authoritarian environmentalism replacing market-liberal democracies via authoritarian governments. Eco-Authoritarians argue that if authoritarian governments’ power addressed the climate crisis, eco-elites would respond to the climate crisis more effectively than current democratic market liberalism does.

Eco-Authoritarians today refrain from portraying the government as all-mighty central planners in order to draw distinctions from historic authoritarian states. However, they envision the centralised government as being endowed with full discretionary power over restricting the personal freedoms and economic activities of its constituents. Abolishing participation means scrapping concerns over conflicts of interests or values between societal groups, public ignorance or irrationality, the need for political legitimacy, and insufficient state capacity. Actors opposed to environmental action are in this way excluded from decision-making processes.

This approach is a direct reaction to three suppositions: that the environmental crisis will ensue due to unlimited autonomy within a world bearing ecological limits; that democratic societies will not be able to impose limits to mitigate the crisis; and that instead, a small knowledgeable group of experts unrestricted by the need for approval from the majority will be able to take effective action.

Eco-Authoritarianism seeks to take on global economic market failures of capitalist societies by putting a well-educated and powerful elite in the driver’s seat. These eco-elites are then trusted to prevent the overexploitation of common property resources by capitalist financial incentives for individuals. Ecologist Garrett Hardin labels the odds between the enclosure of the commons and somebody’s personal liberty as “The Tragedy of the Commons”, which depicts the government’s failure to preserve ecosystems. Here, institutions fail to ascribe an appropriate value to the future preservation of the environment. Heavy tax subsidies to the coal and fossil fuel industries illustrate how financial incentives effectively promote the exploitation of environmental resources.

Since non-renewable resources can either be used today or preserved for future use, the net value that is gained from using a resource today must be balanced with the net value of its potential use in the future. In order to value the preservation of resources for the future, governments must recognise the present value of future consumption. They must rely upon low discount rates, or so-called “hyperbolic discounting”. Can authoritarian eco-elites save the climate from the predatory exploitation of natural resources?

While eco-elites can arguably set and implement discount rates at their discretion, they are in fact likely to face similar challenges as liberal democracies. Today, both democratic and authoritarian societies rely upon systemic consumerism and growth. Enforcing the resolute downscaling of production and consumption is the dominant argument of Eco-Authoritarianism. However, both systems struggle with the endeavour of valuing the benefit from preserving resources for future use. Even though the International Energy Agency expects greenhouse-gas emissions to decline by about 8% due to Covid-19, it nonetheless demonstrates that the climate crisis is too large to be solved only by abandoning planes, trains, and cars. Furthermore, the restraining economic planning is likely to undermine innovation, and the lack of legitimacy could spark deep resentment and even violent protests. Can the planet even be saved without freedom and public participation?

Systemic Junctures: To Value or Not To Value

Constructing eco-elites depoliticises the climate crisis by giving seemingly unpolitical, neutral technocrats and scientists the powers to manage the crisis. However, this re-conceptualization of environmental policy as a non-political issue falsely suggests that any scientifically grounded policy outcome will be based on objective, value-free measurements and calculations, immune to public contestation. Clearly, this is not the case. Science may provide facts and help unearth the potential consequences of action and inaction in environmental matters. It cannot, however, deliver the “right” decisions or posit how to make decisions, void of neatly hierarchized values and interests.

Further, participation must be re-evaluated. Instead of hindering prompt environmentally friendly outcomes, participation can certainly ensure that policy outcomes are not only promising on paper but are actually implemented. Fostering the participation of various stakeholders in a liberal democracy allows for mutual understanding and organising collective action across groups. Beyond its utilitarian significance as an asset to guaranteeing policy implementation, participation is also a moral choice and tool for the inclusion of marginalized groups.

Democracy surely has its flaws, specifically in mitigating the climate crisis, and an unfettered infatuation with the status quo does little to improve its problem-solving capacity. Eco-Authoritarianism is likewise problematic due to its grounding in uncertainty and the rejection of civil and political rights. While both fail to give a complete blueprint for saving our planet’s future, this should not deter us from critically engaging with their strengths and limitations. The ability to mitigate the climate crisis depends on both values and systemic structures. One cannot succeed without the other.

Dominik Rehbaum is a 2021 Master International Affairs candidate at the Hertie School of Governance, where he specialises in Security and Sustainability. He holds a Bachelor’s degree in European Studies of Maastricht University with a focus on European Law and International Relations. Dominik is currently working in the EU/Europe research division at the German Institute for International and Security Affairs. He’s excited about discussing human rights, foreign policy and climate economics at any time of the day. Off duty, he enjoys literature, theatre and food. Preferably all at one time..

Cosima Jiyun Klatte is pursuing her Masters of International Affairs at the Hertie School. With her concentration in sustainability and security, she is currently most interested in peace and conflict studies, human rights and the climate crisis. She holds a B.A. in Liberal Arts and Sciences with a major in Governance from the University College Freiburg where she wrote her thesis on the global and local perspectives on non-state armed groups’ pledge to end child soldiering in the Central African Republic. Outside the classroom, she enjoys photography, art, catching a glimpse of rare sunlight in Berlin and travelling.