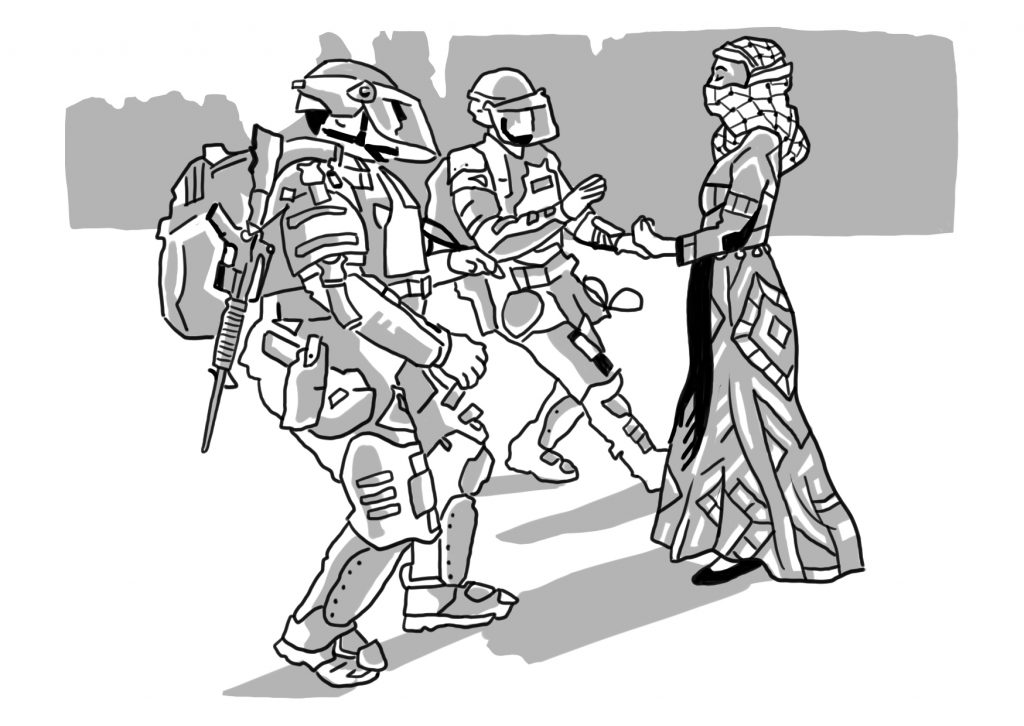 The views expressed in this article are the author’s own and do not necessarily reflect those of The Governance Post editors or the Hertie School.

This first part of a two-part series about the Israeli occupation of the Palestinian people exposes the groundwork of Israel’s settler-colonialist project.

This article intends to recount human rights violations rather than entertain a policy debate. Given that the Israeli narrative already occupies so much space across many platforms, my article will not serve as yet another one. I am here to share what I have witnessed. I also challenge readers to visit the occupied West Bank with an open mind as I have and deconstruct the problematic nature of the Israeli occupation and continued annexation of Palestine.

The Palestine I Saw

Let’s be clear: there is no Israeli-Palestinian conflict. The use of the word ‘conflict’ assumes that there is a symmetry between two competing forces. In reality, there is no conflict. There is simply an occupying power, Israel, and occupied peoples, the Palestinian people.

In this photojournalistic article, I share what my eyes have seen, what my ears have heard, and what my heart continues to feel. With this undeniable privilege, I know that it is my responsibility to speak up and speak loudly against the many faces of injustice. As I have learnt during my time in Palestine, for the Palestinian people, existence is resistance. Thus, I hope the act of sharing their lived experiences will support the Palestinian right to human dignity.

The Art of Settler-Colonialism

Settler-colonialism is a form of colonisation where a settler society entirely or partially replaces an indigenous people or their land. Three of the most commonly referenced settler-colonial projects are contemporary United States, Canada, and Australia; Israel’s ongoing annexation of Palestine should also be added to this list.

I will only provide a brief overview of Israel’s settler-colonial project; however, for those interested in learning more, consider reading Illan Pappé’s comprehensive historical account of the Israeli colonisation of Palestine.

In 1922, Palestinian Christians and Muslims constituted nearly 90% of the population of Palestine. This quickly changed. The emergence of Zionism – a political movement seeking to counter European anti-Semitism by establishing a Jewish state – led to Jewish settlers selecting and colonising land that was initially Palestinian-majority. Furthermore, rooted in European colonisation and following the Balfour Declaration, the British and the United Nations then decided to create a national home for the Jewish people with land that was not theirs to give. In 1948, the State of Israel was born. Since its conception, Israel was founded on stolen land  specifically reserved for the formation of an ethno-nationalist state.

Even before the creation of the State of Israel, the Zionist movement conducted a conscious ethnic cleansing campaign. This process involved the razing of Palestinian villages, confiscation of Palestinian land, mass displacement of Palestinians, refusal of the right of return for Palestinian refugees, and Judaization of Palestine –an integral part of Israel’s identity. Following decades of violence and expulsion, Zionist leader and the eventual first prime minister of Israel, Ben Gurion, formally approved Plan Dalet in 1948, a roadmap for the forcible depopulation of the Palestinian people.

As such, 1947 to 1950 marked the beginning of the Nakba – Arabic for ‘catastrophe’. Between 750,000 to 1 million Palestinians were forcibly expelled or internally displaced, while more than 1.2 million Jewish immigrants were gifted instant citizenship under the Israeli Law of Return. During and following Israel’s victory in the 1967 War, another roughly 600,000 Palestinians were forcibly displaced as 2 million Jewish immigrants were warmly welcomed as citizens. Today, the continuation of Palestinian plight, displacement, and expulsion represents an ongoing Nakba.

While Israelis benefit from the ‘Law of Return’, which refers to the Jewish people who lived in Palestine 2,000 years ago, roughly 6 million Palestinians living-in-exile are not granted that same right of return after having been expelled less than 100 years ago. At its core, this fundamentalist claim is anchored in a logic that dispossesses Palestinians of their indigeneity to the land. Typical of settler-colonialist narratives, this storyline justifies why the land belongs to the settler-colonist, with God being a very convenient arbiter.

There is no Israeli-Palestinian conflict, only occupation and colonisation. Thus, there is only one viable solution: decolonisation.

Between a Wall and a Hard Place

Under Israeli occupation, the homeland of 3 million Palestinians has become an open-air prison.

Since 2002, Israel has been constructing the West Bank Wall, an apartheid wall meant to prevent the Palestinian people from accessing their land. In Bethlehem, I felt like a prisoner in a panopticon as I walked along part of the 810 kilometers of concrete, observed by Israeli military watchtowers. Soon enough, we visited the rest of the occupied West Bank, driving through some of the more than 700 movement obstacles.

At these roadblocks and checkpoints, Israeli occupation forces subject Palestinians to verbal and physical abuse by Israeli soldiers. Journeys that should only take minutes take hours for those bearing Palestinian license plates. In fact, there are two routes from Palestine to Jordan: an Israeli and foreigner’s route which takes 45 minutes, and a Palestinian route – riddled with checkpoints and overcrowded, poorly maintained roads – which takes up 12 to 16 hours.

During my visit, I had the opportunity to visit the Tamimis, a well-known Palestinian activist family. While I was sitting on a hand-woven carpet in their home, they recounted their physical restrictions. They expressed how travel outside their village is frequently and arbitrarily blockaded by Israeli soldiers, simply because of ‘security concerns’.

I later learned that the experience of the Tamimis is in fact, part of the Israeli authorities’ broader efforts to restrict the freedom of movement of Palestinians through the issuance of Palestinian ID cards. Introduced in 1967, these ID cards prevent Palestinians from moving freely and force them to seek permits to enter and exit the occupied West Bank and Gaza Strip. Each Palestinian has an ID card, regardless of their citizenship. If a Palestinian does not have their physical Palestinian ID card with them at a checkpoint, they can face up to 6 months of administrative detention, which can arbitrarily be extended again and again and again.

Under international human rights law, these settlements are illegal.

Building an apartheid wall is illegal.

Equal Rights Do Not Exist

As the storm raged on, violent waves of water flooded the basement of the Palestinian-owned bar in Haifa, where we huddled, listening to speakers involved in Palestinian civil society. Paralleling the intensity of the torrential rain outside, Canadian-Palestinian lawyer Diana Buttu began her crescendo: “Palestinians have always been viewed by Israelis as either a security or demographic threat.”

In Israel’s apartheid state, Israeli citizenship exists, but Israeli nationality does not. Therefore, an Israeli citizen is categorized based on which ethnically-defined nation they belong to: the Jewish, Arab, or Druze nation. As a consequence of this concealed mechanism to institutionalise discrimination, Palestinians who hold Israeli citizenship are subjected to second-class treatment.

There are more than 65 laws that apply only to those from the Arab nation – including all Palestinians. Likewise, there are many others that benefit only those from the Jewish nation. Below are relevant examples of the Israeli state’s discriminatory laws:

Law of Return: allows anyone coming from the Jewish nation has the right to automatically acquire Israeli citizenship; the same does not extend to Palestinian Arabs.

Admissions Committee Law: Jewish communities can reject members of other nations from residing with them if they are deemed “unsuitable to the social life of the community or the social and cultural fabric of the town.”

Citizenship Law: those with Israeli citizenship cannot pass along their citizenship to those coming from Middle Eastern and North African countries.

Jewish Nation-State Law: establishes a law of Jewish supremacy in which those who do not belong to the Jewish nation are demoted to second-class citizenship; for example, Jewish settlements are seen as national value, and so the demolition of Palestinian homes and construction of illegal Israel settlements is supported by the state.

In Israel, equal rights for all citizens does not exist. In Israel, there is only apartheid, which the 1973 United Nations International Convention on the Suppression and Punishment of the Crime of Apartheid defines as the “inhuman acts committed for the purpose of establishing and maintaining domination by one racial group of persons over any other racial group of persons and systematically oppressing them.”

These flagrant practices of discrimination reveal a very dark reality: the Israeli government is not acting alone. As the Israeli government continues to systematically chip away at the legal rights of the Palestinian people, the world’s powers uphold Israel’s ethno-nationalist agenda. Palestine has become a laboratory for settler-colonialism as well as new methods of control, thereby legitimising and paving the way for countries like the U.S. and India to adopt similar tactics.

Ultimately, Palestinian life under visible and invisible occupation must be narrated by Palestinians. The next part offers a glimpse into their daily realities under a self-claimed democracy that actively colonises, segregates, and occupies them.

Inspired by the resilience of his ancestors who survived war and persecution as Vietnamese refugees, André Luu aspires to advocate on behalf of and engineer intersectional policies for migrants upon graduation. Currently, he is a 2020 candidate for the Dual Degree MIA-MPP with Columbia University’s School of International and Public Affairs in New York City and the Hertie School of Governance in Berlin. André also holds a BA in Peace & Conflict Studies from the University of California – Berkeley. André cannot survive without vegan cooking, reading books, and wandering aimlessly outside.