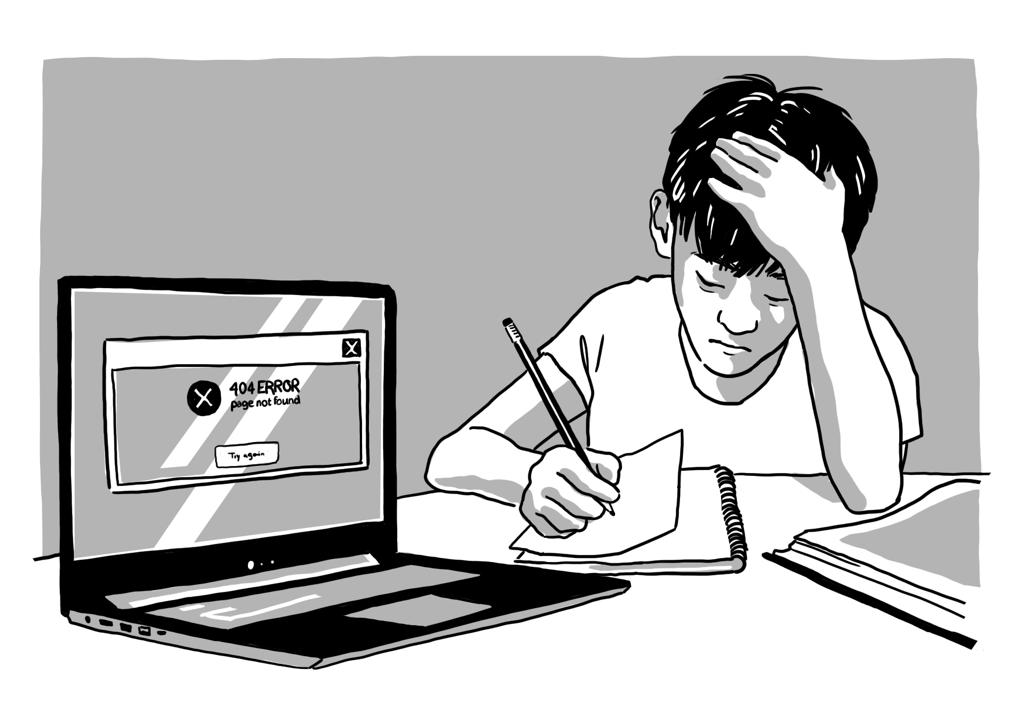 In this unprecedented time, substantial inequalities in the use of the internet are depriving the young and the elderly of their fundamental rights to education, access to information and participation. As the Coronavirus relocates most of social, political, and educational life in Europe to the digital sphere, the European Union now needs to ensure human rights online – effective, equal and fair access to the internet for all its citizens.

“Coronavirus came way too fast. The schools are completely overburdened. We always demanded digitisation at schools, but they didn’t manage to prepare their pupils before Coronavirus came,” Tom criticizes resentfully. He is a maths and sports teacher at a secondary school in a small town close to Calw in the Northern Black Forest.

Hannah, on the other hand, is more laid-back. “We’re improvising”. She teaches German, geography and politics at an integrated secondary school in the Pankow district of Berlin. “It’s now impossible to get all pupils on board, and we can’t expect them to be perfectly equipped with the necessary hardware and skills to continue their school online,” explains Hannah. “Why should we put even more pressure on our pupils?”

When Coronavirus hit Hannah’s and Tom’s schools, teachers, children and parents were equally overwhelmed by the situation of moving education online. They did not have enough time to prepare their pupils for the sudden transition to homeschooling. Their schools weren’t prepared to provide sufficient hardware or software to ensure equal access to schooling materials for all pupils. Several weeks after the outbreak, schools continue to struggle with online teaching, internet research, and the lack of class structure.

Although Hannah and Tom could partly bridge the lost time in the first three weeks of online homeschooling assigned by federal authorities before the Easter break, they are worried about the future consequences of a longer-term lockdown. “The disparity between pupils with ‘good’ and ‘bad’ grades and between those with and without support at home will widen dramatically,” Hannah warns. Tom adds: “The children in danger of falling through the education system are both those who are struggling the least and the most. Both groups will now fall through the education system.”

The experience of online schooling during the pandemic challenges the EU’s self-image of global digital leadership. In her speech on the “digital future for Europe” in February, Commissioner Vice President Margrethe Vestager declared that Europe has “built a new society on the conviction that we are all fundamentally equal, with the same rights, the same duties, the same claim to a good life.” The EU’s notion of digital leadership evolves around a democratic society that promotes equal and fair civic participation both online and offline.

Tom’s and Hannah’s homeschooling experience resurfaces a “digital divide” that children face not only in Germany but also across the entire EU in-person and online. While the 2012 European Strategy for a Better Internet for Children (BIK) recognises that not all children in Europe get the same empowerment and protection opportunities online, the BIK strategy has yet failed to fulfill its promises. Too often, the EU’s ambitious goal of streamlining legislation for integrated educational support for children’s online activities is met by rather uneven national policymaking. Although some child online safety policies have been implemented in most Member States, persistent gaps in policy governance and stakeholder participation averted comprehensive improvements of Internet access in European schools. The EU’s efforts came just a little too late.

Today, EU Member States face a structural divide of applied internet skills between teenagers. The 2019 media report concluded that only 44% of the 12 to 13-years-olds possess a computer or laptop at home and 76% have unlimited wireless. This cleft deepens when it comes to teenager’s applied internet skills even within the Member States. While about 90% of the 16 to 29-year-olds have daily computer access in Estonia, only 69% have daily internet access in Romania. This lack of equal infrastructure is not only nerve-wracking for teachers, but it deprives children of their fundamental right to education.

In Hannah’s class, one pupil doesn’t have a smartphone and can only access class assignments from his mother’s computer. The mother, who is currently working remotely from home office without a printer, cannot give her computer to her child for schoolwork. Hannah can only speculate about the many more obstacles her pupils face along with poor internet connection. “Children may have to take care of their siblings or grow up with parents who do not speak enough German to help with assignments,” she identifies a few

The European Coronavirus lockdown exposed deeply-rooted inequalities beyond the classroom. Today, the internet remains as the only place to exercise fundamental rights of social interaction, access to information, and effective civic participation.

Past Sunday, Poland had scheduled its presidential elections before they postponed the election date. How could the Polish government have guaranteed free and fair elections during a global health crisis based on the EU’s values of equal access to information and effective participation? The mere process of voting by mail alone will not guarantee fairness and transparency.

The question of equal participation gains even more traction in light of the disparities between young and elderly in EU Member States. One-third of Europe’s elderly people aged 65 and older live alone and may have already been subject to social isolation before the Coronavirus pandemic. Not even half of the elderly access the internet at least once a week. Unequipped with the infrastructure or skills to go online, many elderly people cannot make effective use of their rights. In Central and Eastern European countries only about 20% of the elderly use the internet at least once a week. This inequality implies a divide in equal participation not only between young and old but also regional between Northern and Southern EU Member States.

The EU defines fundamental rights as “indivisible, universal values of human dignity, equality and solidarity […] creating an area of freedom, security and justice”. The EU has yet to revisit its understanding of human dignity, equality and solidarity to tackle the root of  discriminatory access to information and civic participation online. More so, it has consistently ignored the calls of scholars and human rights activists to recognise equal and fair access to online information as a core of its commitment to the freedom of expression.

“The internet has become a key means by which individuals can exercise their right to freedom and expression”, U.N. Special Rapporteur Frank La Rue declared back in 2011. Access alone, however, cannot solve Europe’s digital divide. The current lockdown demonstrates that the EU must anchor effective internet use as an invaluable fundamental right. Equality is not realised just by handing people broadband and an iPad.

“Yes, a digital library with technical hardware such as computers would help. But it does not solve the problem that pupils may not have their private room or a desk to work on,” Hannah concludes as she continues with her online homeschooling. We need a more holistic understanding of effective internet access as a fundamental right that meets the needs of the most vulnerable today. Only equality in the right to effective use of the internet catalyse the full realisation of wider civil, political, social, and cultural rights.

*The names of the interviewees have been changed in respect of their privacy.

*Hannah is a German, Politics and Geography teacher at an integrated secondary school in the Pankow district of Berlin bordering Brandenburg. In her class, she teaches pupils with very different learning needs: While some pupils are keen to learn but too quiet to get attention in class, others do not seem to show any motivation in learning. Four children need special support schemes due to learning difficulties and challenges in their emotional and social development. One pupil cannot yet follow Hannah’s teaching because she has not yet received adequate German language courses to actively participate in class.

*Tom is a Maths and Sports teacher at a medium secondary school (Realschule) in a small town close to Calw in the Northern Black Forest. His class is just as diverse as Hannah’s class along socioeconomic and ethnic lines; Around half of the children have “migration background” – that is, children who themselves or where at least one of their parents have not acquired the German citizenship at birth. Tom has to deal with extreme performance differences in class: While some have great support from their parents, many other children with significant  struggles face language problems, and may  have to translate between the teachers and their parents. Others are already bored the first day of class – Tom sees their development just as worrying with the ongoing homeschooling.

Dominik Rehbaum is a 2021 Master International Affairs candidate at the Hertie School of Governance, where he specialises in Security and Sustainability. He holds a Bachelor’s degree in European Studies of Maastricht University with a focus on European Law and International Relations. Dominik is currently working in the EU/Europe research division at the German Institute for International and Security Affairs. He’s excited about discussing human rights, foreign policy and climate economics at any time of the day. Off duty, he enjoys literature, theatre and food. Preferably all at one time.

Nina Locher is a 2020 Dual Degree Master candidate of Public Administration and Public Policy at the London School of Economics and Political Science and the Hertie School. Before starting her master’s degree, Nina worked as a project manager at the Heinrich-Böll-Stiftung for two years, where she was responsible for projects on Turkey and Greece concerning foreign policy and democracy. Most currently, she is the author of the foundation’s Brexit-Blog where she discusses the policy implications of the UK leaving the European Union. Nina is deeply interested in human rights, civil society and foreign policy issues in the digital age – and a passionate feminist.