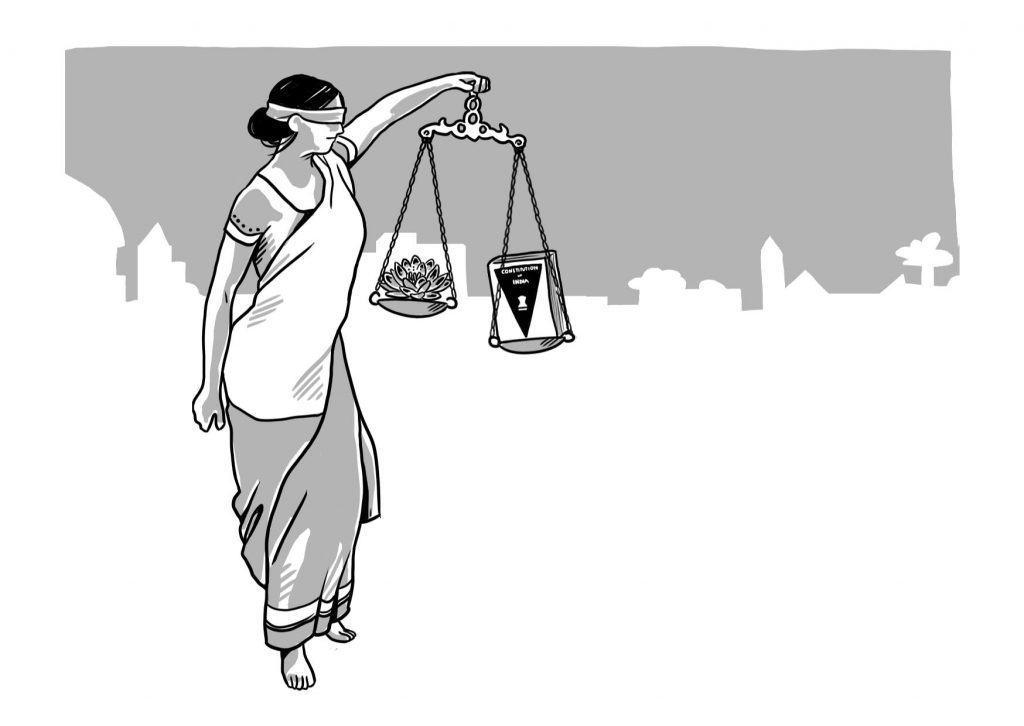 This is the third of a three-part series about India’s Citizenship Amendment Act (CAA). In this article, we talk about the controversies surrounding the constitutionality of the CAA.

The 2019 Citizenship Amendment Act constitutionally legalised the violation of fundamental rights in India. The Indian Supreme Court refuses to hear a public petition that deems the CAA unconstitutional.

India has entered a phase of extreme polarisation. The Bharatiya Janata Party (BJP), the country’s ruling party, is exhibiting ‘procedural fascism’, a term coined by Arjun Appadurai, professor of anthropology and globalisation at the Hertie School, in an opinion piece published in The Wire. This term fittingly describes how the BJP has passed a bill in the parliament that contravenes fundamental rights proclaimed in the Indian Constitution and yet has not faced legal repercussions. Procedural fascism, here is described as the method of utilising the legislative and the judiciary under the whims and fancies of the executive who is in power. The lacklustre response of the Supreme Court, regarded as one the pillars in protecting the constitution, begs several questions: Is the highest court of the state able to suspend the Act or will it accept the codification of fundamental rights infringements? Will the Supreme Court act impartially and protect the constitution or will it decide in favor of the highly populist authoritarian centre, thereby becoming complicit? Procedural fasicsm plays an integral part in shaping the relationship between the state and the law in India.

The Supreme Court of India has so far received 143 petitions from various pressure groups, politicians, and Indian citizens, challenging the CAA, which passed in the Indian parliament on December 11, 2019. However, on January 9, 2020, the Supreme Court refused to entertain a petition to declare the CAA “unconstitutional” and refrained from commenting on the CAA before hearing the government. The Court then asked the central government (Centre) for an explanation about the pleas challenging the Act.On March 17, 2020, the Centre  responded with a 129-page counter affidavit on the petitions, stating that the CAA violates neither the legal, democratic, or secular rights of any Indian citizen nor the constitution. However, we challenge this plea by examining the roles of the prime minister, the judicial system and the Indian Constitution.

According to the Indian Constitution, there are six fundamental rights for citizens, namely the right to equality, right to freedom of religion, cultural and educational rights, right to freedom, right to constitutional remedies, and right against exploitation. The CAA introduced by the ruling BJP effectively legalises the violation of the fundamental right to equality (Article 14) and the right to life and liberty (Article 21), as it strategically excludes Muslim undocumented migrants from the neighbouring countries of Afghanistan, Pakistan, and Bangladesh from the possibility of seeking citizenship in India. This violates the fundamental rights because the government cannot arbitrarily create unreasonable classification among equally placed groups.

However, despite clear opposition, the BJP has steadfastly retained its rhetoric, advocating the CAA. The BJP’s populism relies heavily on Prime Minister Narendra Modi, who claims to be the sole representative of Indian interests and the embodiment of the will of the people. His cult personality and brand-management-like attitude exerts strong influence. He understands the general psyche of the larger population and caters to their needs, for example through his televised addresses. At the same time, he avoids discussing the economy and unemployment and certainly has no response towards the illegality of the Act.

With minorities being subject to more frequent mob lynchings and dissenters voices silenced, there is an imminent threat to the fundamental values of the Indian Constitution. The ruling party has engaged in a nationalistic chauvinism against people determined as ‘enemies’ and has retained and reinforced its position in the government. This has fostered the cultural acceptance of hardline Hindutva policies; people’s willful ignorance, coupled with a constrained judicial system have fueled the right-wing government to bring their Hindutva ideologies into action. To understand the pluralistic ignorance of Indian society on matters of grave importance such as the CAA, one must delve deeper into how the Indian judiciary functions.

The wheels of justice in India turn ever slower in India. Litigating before Indian courts generally takes almost a decade. The judicial process is extremely lackadaisical. Even if one obtains a favourable order, it will be subject to tedious legal proceedings in the form of an appeal or a review or an SLP (Special Leave Petition). Further, the main legal proceeding inescapably has multiple interim proceedings which must be adjudicated before one can proceed to hearings on the merits of the main dispute. The Indian judicial system follows a three-tier system: the lower courts, the state High Courts, and the Supreme Court. All three tiers are heavily constrained by lack of staff, resulting in significant delays. Additionally, the exorbitant costs an individual incurs to proceed with their case disincentivises engaging in legal battles. These convoluted judicial practices – high bureaucratic and financial hurdles – result in a significant collective action problem when trying to confront the government on the CAA.

Constitutional Violations in the Context of the 1947 Partition

Articles 5 to 11 of the constitution govern the conferment of citizenship. Article 5 explicitly states that citizenship is solely conferred based on the principles of jus soli, or citizenship established  upon birth. This means that any person born in India on or post-26 January 1950 but before the commencement of the 1986 Citizenship Act on 1 July 1987 is a citizen of India by birth. The Citizenship (Amendment) Bill, 1986, passed by both houses of Parliament, stipulates that it is no longer adequate to be born in India to be granted Indian citizenship. At the time of birth either one of the parents has to be an Indian citizen for the person to become a citizen of India. The CAA hence deals with Indian nationality law.

Through the 42nd amendment to its constitution in 1976,  India added secularism to its preamble. However, it must be noted that India’s version of secularism is very different from the Western idea which espouses the complete separation of state and religion. In India, state involvement in religion exists in that it accords equality to all religions. India thus does not have an official religion.

So far, the Indian Citizenship bill has seen six amendments, the latest one being the CAA in 2019. The first amendment in 1986 restricted citizenship by birth to children born to at least one  Indian parent. But until now, none of the five amendments have emphasised a person’s faith as a condition for citizenship. The CAA 2019 aims to change the definition of illegal migrants as contained in the Citizenship Act. The objective to accelerate the granting of citizenship to individuals facing persecution in their home country has a supposedly noble intention. However, through its CAA of 2019, the government has created an arbitrary religious classification.

The Act excludes Muslims from Afghanistan, Bangladesh, and Pakistan, while including Hindus, Christians, Jains, Sikhs, and Buddhists from these countries. By excluding only Muslims from the opportunity to receive Indian citizenship, the central government has codified its anti-secular tendencies, thereby endangering  the social fabric of the 70-year-old democracy of India. The CAA not only disregards the Indian Constitution and violates Articles 5 to 11, it also incites communal disharmony that might trigger further friction. With upcoming state elections in the border states of Assam and West Bengal, where the battleground issue is religion, CAA-provoked communal tensions will be detrimental to the country.

Fathoming whether the CAA will remain or be revoked is dependent on the Indian judiciary. Specifically, it is unclear if the population will be able to seek constitutional backing from the Supreme Court. Based on Appadurai’s notion of procedural fascism, we might see a creeping codification of right-wing populism in India. The BJP-majoritarian government currently appears to be in control not only of legislative powers in line with its mandate, but also judicial powers. This would be made explicit by a Supreme Court decision backing the BJP-led CAA that clearly contravenes fundamental rights granted through the Indian Constitution. With the COVID-19 pandemic taking centre stage in India, the BJP will be looking forward to using this time to extend the Court’s hearing on the issue even further. As things remain uncertain, one thing is for sure. If the Act is legalised it will definitely lead to mass violations of human rights.

Puneeth is a first year Master of Public Policy candidate at the Hertie School. He holds a bachelors degree in Human Resource development from Alliance University. His research interests include inequality and welfare, education policy and democratic reforms.

Yash Das Sharma has a Bachelor’s in Political Science and a Masters Degree in International Studies. He did his dissertation on development and integration. His research experience is in education and sustainability, and is mainly interested in digitalisation and governance.