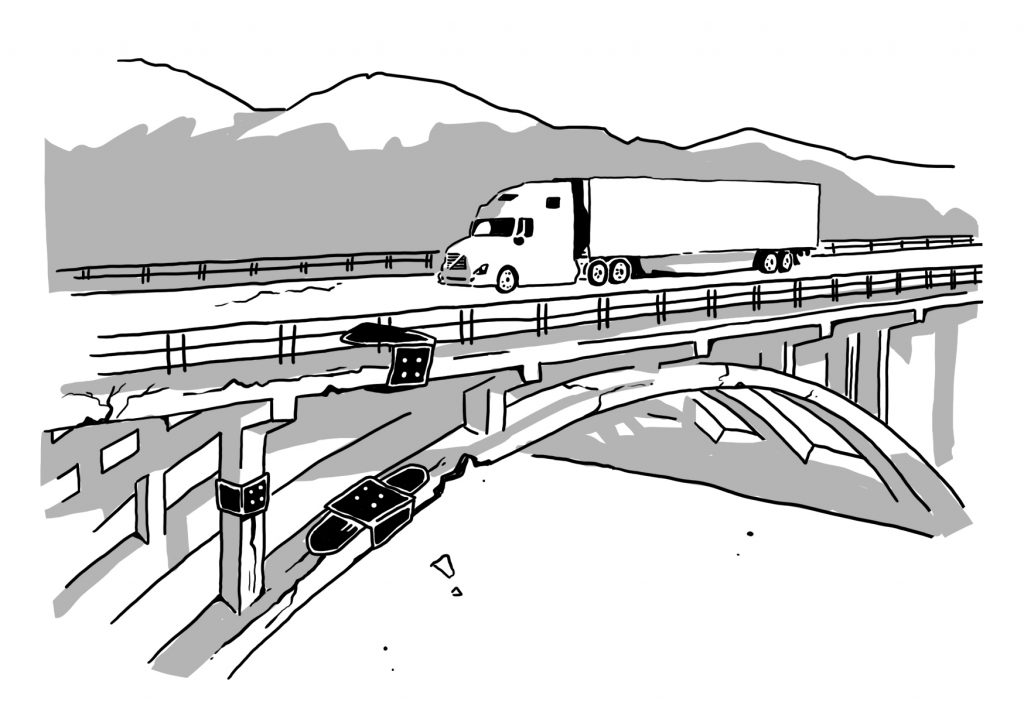 Let’s face it, the USA’s infrastructure is crumbling. Though politicians across the aisle have been calling for massive transportation infrastructure projects for decades, nothing significant has stuck. Though it’s easy to blame Trump for this failure, underneath the surface lies a decades-long ideological shift in the Republican Party that began under President Reagan in the 1980s that has paralyzed the federal government’s ability to effectively invest in the basic needs of citizens.

“When I see the crumbling roads and bridges, or the dilapidated airports or the factories moving overseas to Mexico, or to other countries for that matter, I know these problems can all be fixed, but not by Hillary Clinton, only by me.” One key issue for Donald Trump during the 2016 Presidential Election was to tackle the growing need to overhaul the decaying US infrastructure. It’s a nice, glowing quote.

It goes without saying that the importance of having high-quality infrastructure resonates with lawmakers and the public. Historically, the US understood this fact, as it demonstrated with the transcontinental railroad of the 19th century to FDR’s New Deal and the Interstate Highways of the ‘50s. Unfortunately, lady liberty seems to be resting on her laurels; key US infrastructure, like the North River Tunnel to Manhattan, is close to 100 years old, and their age is showing. In 2017, the American Society of Civil Engineers (ASCE) ranked the USA’s transportation infrastructure at a D+ overall and estimated the cost of fixing the problem at a whopping $4.5 Trillion. But luckily for the US, 2017 also saw the election of a real estate mogul who made the message loud and clear that he would make US infrastructure great again. So we have nothing to worry about, right?

If only it were that easy. Things got off to a good start. Before Trump took office, he assigned businessman and member of the US-China Commission Daniel Slane to spearhead the administration’s infrastructure plan. Xi Jinping’s Administration is basically an infrastructure machine, and Slane realized from up close that China’s infrastructure-building spree has led to massive economic benefits for the country. At the beginning of Trump’s tenure as President, Slane published a report on 50 infrastructure projects that are both in dire need of attention and that would create thousands of jobs. So how could the situation still be so untenable if the government has been throwing hundreds of billions of tax-payer dollars at the problem?

That’s about where the progress stops. Though the House of Representatives is controlled by the Democrats, all bipartisan efforts for infrastructure investment have fallen short post-midterms due to the high levels of distrust between the parties. Slane himself stated that he realized the administration was not serious about keeping their promises to invest $1 trillion into the USA’s infrastructure by February 2017. Within months, Slane and his infrastructure plan as a priority for the Trump administration became casualties of the intrigue and revolving door we have seen from this White House.

Though the price tag of $1 trillion may seem large, as a percentage of national GDP, the US currently spends less than 2% of its revenue on infrastructure. Compare this with 5-10% from most other OECD nations and it’s easy to see how the US falls behind; however, the problem is more inherent than just a lack of funding. Harvard Professor of Business Rosabeth Moss Kanter posits two main underlying causes to the infrastructure bottleneck: an ideological shift of the Republican Party and a lack of national leadership to bring relevant stakeholders to the table.

Firstly, there’s the money and ideology problem. Over the last few decades, the Republican Party has marched ever further to the right corner of the political spectrum. When one looks at the government as an inherently evil entity, it becomes a personal mission to stop it at all costs. This includes a belief that all government spending is bad, and any effort to raise taxes to fund federal projects is sacrilege. Though Republican lawmakers will drone on and on about building infrastructure, they have yet to support measures to afford such massive spending initiatives. In fact, Republicans seem to believe they can solve their problems by having the government borrow more instead of raise taxes. An example of this at work is with the Highway Trust Fund, which serves to maintain highway infrastructure across the country. Its revenue comes from the federal tax on gasoline; however, this tax hasn’t been raised since 1993, which forces the government to borrow $16 billion per year to meet the requirements of the fund.

Secondly, there’s the business problem. There are many incredibly wealthy businesses whose entire existence is closely tied to the infrastructure sectors such as airlines, auto manufactures and rail companies to name a few. Nowadays, transportation leaders are  much more decentralized and there is little national leadership to unite all interests at the same table to pass truly sweeping regulation that addresses all the needs of the ailing national infrastructure.

The National Infrastructure Advisory Council (NIAC) is one policy table that was created by the Bush administration in 2001 as a branch of the Department of Homeland Security to offer expertise to strengthen the economic impact that infrastructure brings to the economy and to ensure that US infrastructure is protected from cybersecurity risks. Key infrastructure projects and systems are often targets  of foreign cyberattacks, and as such require resilient cybersecurity to prevent harm to the country; however, in 2017, 8 members of the NIAC panel resigned in response to the Trump Administration’s ineptitude to provide proper leadership to rebuild and protect US infrastructure. The experts were particularly concerned that Trump pulled out of the Paris Agreement, citing rising sea levels as a grave threat to the safety of communities guarded by levees. If Trump cannot sufficiently engage already existing federal panels and groups of experts to fix the problem, what exactly is his plan?

Daniel Slane believes Trump will attempt to solve the infrastructure conundrum by making the States responsible. Of course, the States absolutely do not have the spending power to afford such massive projects and will be forced to rely on public-private partnerships. The great American tradition of having sectors of the economy rely on Wall Street and the private sector is not exactly popular, however, if the Bernie-bros are to be believed anyway. In a nutshell, Trump wants to sell off US infrastructure to the highest bidder.

It’s easy to point fingers at Trump’s non-diplomatic style of politics as the core reason as to why he has failed to shore up support in Congress to revamp infrastructure, but unfortunately, this is just the tip of the iceberg. Trump represents merely the most recent flavor of the failure to pass meaningful reform in this policy area. Hundreds of billions of dollars have been invested into US transportation infrastructure over the last decades, yet we are still mired with an ever-decaying quality of roads, bridges and river locks.

As it stands, the US government has auctioned off these basic amenities of the citizenry to the highest bidder with utter disregard for the people’s wellbeing. It is morally reprehensible for the government to shirk its responsibility to provide basic transportation needs to its citizens and instead sell off these contracts for profit. The cost of addressing these issues rises every day that the government delays fixing the problem. But until that happens, Americans will continue to suffer from maddening congestion on their commutes and billions in potential profit lost every year in economic inefficiency.

Ethan Webster is a second year MIA student at Hertie. He is originally from Texas and has worked at both the state and federal level of the US government. After moving to Europe, Ethan has focused on trade policy, multi-level governance and financial regulation issues. His hobbies include travel, finding excellent restaurants and drinking too much coffee.