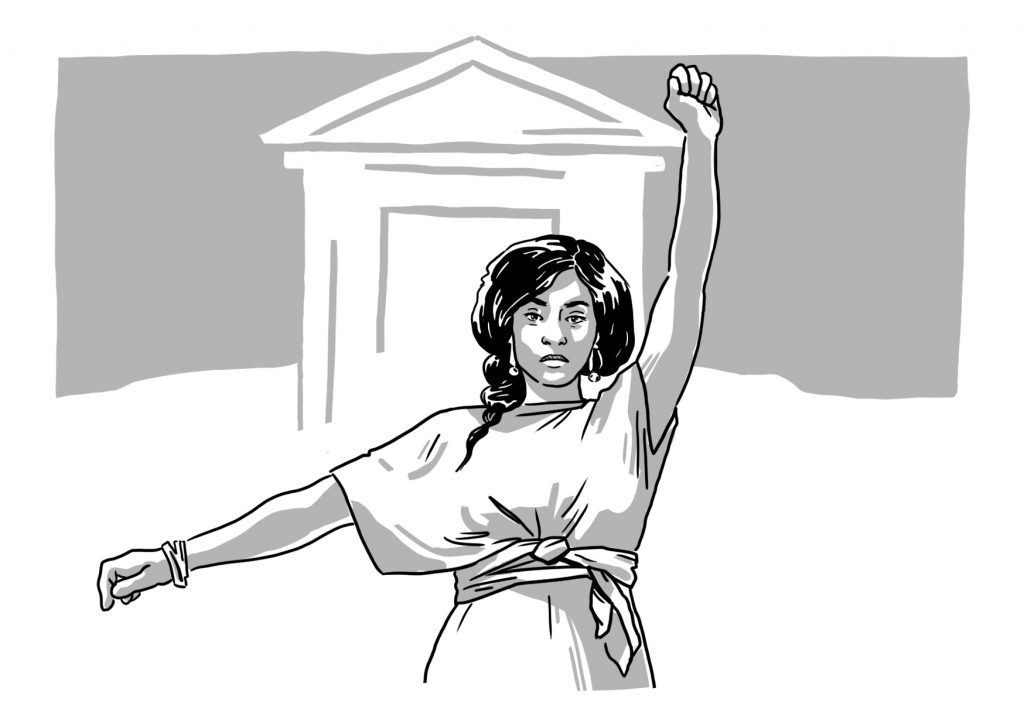 Last November, the first high-profile #MeToo revelations sent shockwaves through the French cinema industry, dealing a serious blow to patriarchy. But fighting against the patriarchy cannot exist in isolation from the struggle against racism and capitalism, and in particular, the French feminist movement has yet to reckon –  fully – with the question of race. Momentum should not distract from the urgent need – still – to decolonise the French feminist movement. This is not only a moral necessity, but it is also critical for the movement to succeed.

France was dubbed to have finally lived its #MeToo movement last November when actress Adèle Haenel revealed that she had been sexually harassed by film director Christophe Ruggia at the time of filming, aged only 12. The saying goes one step forward, two steps back and the nominations for the Césars Awards, a prestigious French film festival, a few months later, reminded us that the patriarchy is alive and well. Indeed, the Académie des Césars announced a whopping twelve nominations for Roman Polanski, infamous for having fled sentencing in the United States for a conviction of statutory rape. The feminist rage that ensued did not prevent Polanski from being awarded Best Director. Reactions poured in, supporting Haenel who made a widely remarked upon and remarkable exit from the ceremony as the award was being presented.

Yet, this wasn’t the only remarkable episode of the evening. Aïssa Maiga, French actress and co-author of the book Noire n’est pas mon métier (Black is Not My Profession) delivered a powerful speech on stage calling out widespread racism in the French film industry. Her speech left the audience feeling visibly uncomfortable as she counted the number of black people in the room – 12 that evening in a room of 1,600. Outside the room, Maiga was met with incredible backlash and criticism for her “arrogance” and “racialism”. The backlash is arguably a measure of success: it puts the finger where it hurts. Anti-racist activist Rokhaya Diallo emerged as a lone voice celebrating Maiga’s powerful message about the industry’s continued resistance to stand up to racism and wondering why it is that this message is still so inaudible in France. At best, the very fragmented feminist allies were timid in their collective support – at worse, nowhere to be seen or heard.

Support and recognition for Maiga is as much a feminist act as support and recognition for Haenel. Standing up against the patriarchy has little meaning if it does not also include standing up against racism. It is an opportune time to reflect on the way the French feminist movement has dealt with the topic of race. Doing so is to acknowledge how France’s persisting ignorance of colonial legacies has shaped the French feminist movement.

To navigate this question, political scientist Françoise Vergès offers a roadmap for decolonising (French) feminism. The starting point of her analysis is to observe the fragmentation of the French feminist movement between feminists who claim to be “universal”, in opposition to those castigated for being “communitarian”. While “universal” feminists claim to represent all women, they in fact impose the experience of mostly white middle-class women as representative, and in doing so marginalise, exclude, and silence the different experiences of women* of colour, working-class, refugee, queer, disabled, and transwomen*. Vergès thus invites us to reflect on this strand of feminism that she labels “civilising feminism” and explores how this approach is rooted in the legacies of France’s colonial past.

Yesterday, France justified the brutal and dehumanising colonisation of people around the world under the pretense of bringing peace and civilisation. Today, France pursues its neo-colonial agenda in the name of women’s rights, more notably under the banner of Françafrique in countries formerly colonised on the African continent.

Decolonising feminism entails expanding the current discourses and reflecting on the issues at the forefront of feminist struggles in France. How can we claim to be universally representing all women* but remain silent in the face of the oppression that the Françafrique foreign policy perpetuates? How can I claim, as a white woman, to support the liberation of all women, but in the same beat, accept that the burden of unpaid and precarious care work continues to fall on the shoulders of mostly racialised women*? How can we ignore and remain blind to the connections between violence against women* and police brutality that overwhelmingly targets black and brown bodies in the banlieues?

These questions are particularly difficult and uncomfortable to ask in a country where talking about race seems unthinkable. Whatever the justifications for not talking about race are, whether because of the memory of the Holocaust or a self-constructed image of an egalitarian nation, it remains that race – or culture, ethnicity, religion – is a relevant organising factor in our society and is intimately intertwined with France’s colonial history.

Take the ongoing and virulent public debate led by femonationalists in France who ironically oppose women’s freedom and right to wear the veil or Burqa in public spaces, by the way, essentialising Islam as a religion and culture. One simply cannot ignore the (unconscious) continuity with the colonial ritual of ‘dévoilement’ during which Algerian women would remove their veils to symobilise their “emancipation” from the Algerian struggle for independence.

This ritual was nothing else than a manifestation of France exerting its colonial domination over Algerian independence, and the contemporary debate that casts Muslim women as oppressed by Muslim men exposes the continuities of colonial legacies in our society today. That is, race and racialisation are interlaced with discourses of gender and sexuality, yet there is no unanimous effort from the French feminist movement to confront this present reality in the context of France’s history. It is critical for French feminists to extricate themselves from the discursive boundaries of the French context if the movement is to truly represent, include and fight for all women*.

In practice, this means offering vocal and unambiguous support for Maiga after her speech at the Césars. Opening up and holding spaces for Black women*, women* of colour, refugee women*, disabled women*, Roma women*, transwomen*, and working-class women*, uniting behind those already leading the struggle against the exploitations they are personally affected by. Embracing the discomfort of acknowledging our own power and privilege. Learning from each other and practicing solidarity between women*.

The asterisk is used to indicate that ‘women’ is an umbrella term that is inclusive of the wider community of people who do not neatly identify within the gender binary of ‘man’ and ‘woman’.

Victoria is a 2020 candidate for the Dual Degree MPA-MPP with the London School of Economics and Political Science in the UK and Hertie School in Germany. After graduating from Durham University in the North of England, she spent three years in London working in communications and public affairs. She is now specialising in social movements, writing her thesis on the convergence of social justice movements with a focus on the intersections of feminism and climate justice. Victoria gets excited about discovering cities, dancing and reading a good book on a sunny day.