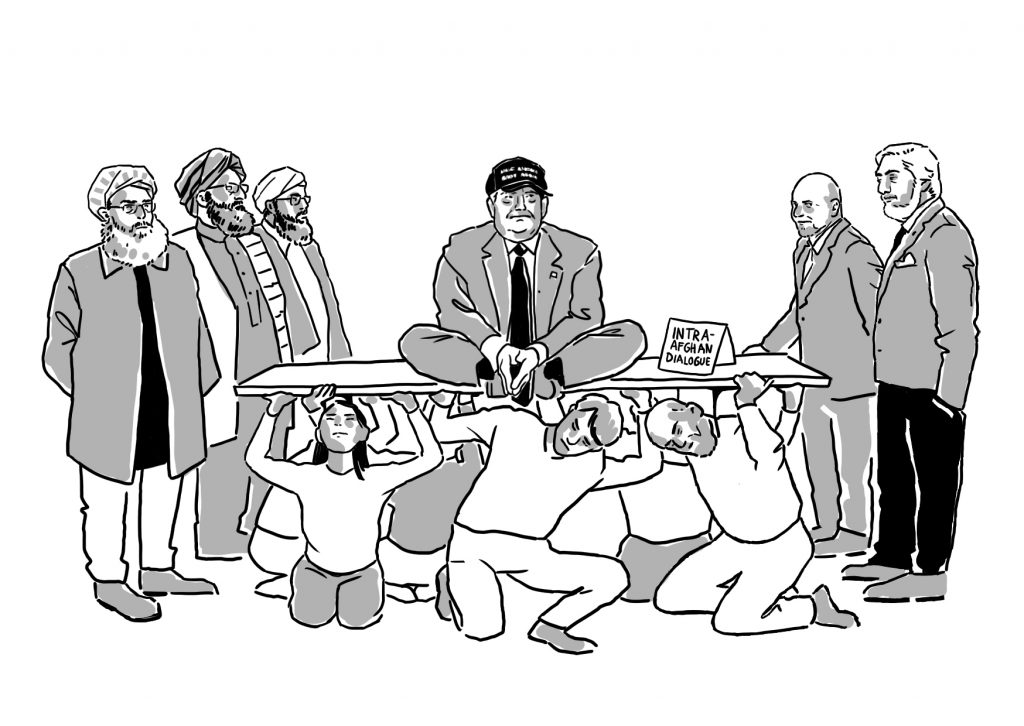 The Doha peace agreement between the USA and the Taliban is an important opportunity to end the devastating war in Afghanistan; however, the hardest part will be the intra-Afghan negotiations determining the political system, the role of religion, and women’s rights in Afghan society. If foreign troops are withdrawn to serve US election campaign purposes before a post-war order is settled, the opportunities for peace and development in Afghanistan will be as few as before the failed war.

In the 19th year of the war in Afghanistan, the Feb. 29 agreement in Doha between the USA and the Taliban appears to be the first sign of hope that an end to the fighting is in sight. Since the 9/11 terrorist attacks, the war has dragged on for more than 18 years – almost twice as long as both World Wars combined. Some newly deployed US-American soldiers were born after 9/11, the event that triggered the US counterterrorism invasion in the first place. Most importantly, it has been a deadly conflict for all sides, particularly for the civilian population that has strategically been targeted by suicide attacks and bombing campaigns.

Despite the militant Taliban gaining the upper hand and pushing the Western-trained and -equipped Afghan security forces back, the Doha Agreement comes at a time when all sides are war-weary. The agreement contains provisions to exchange prisoners, start intra-Afghan negotiations and review sanctions on Taliban leaders in exchange for cooperation in counterterrorism measures and the prevention of safe havens for terrorists. Most importantly, the US-led coalition will reduce troop size from over 12,000 to 8,600 in 135 days and conduct a “complete withdrawal of all remaining forces from Afghanistan within the remaining nine and a half (9.5) months,” if the Taliban provisions are fulfilled.

A “Peace Deal” without Ceasefire and State-Building Provisions

However, the difficult part of the peace process begins now. The Doha Agreement is a start at most; it contains neither a ceasefire agreement nor any political power-sharing or state building provisions. The mere fact that the US has struck an agreement with the Taliban without the participation of the internationally-backed government shows that the power structures have not changed in a favourable way.

The Taliban, a fundamental Islamist group which originates from Islamic “madrassas” in Pakistan, already ruled the country from 1996 until 2001. Its strict and repressive rule imposed Sharia law, neglected roles for women in public life and education, and reversed much of Afghanistan’s traditional culture. In pursuit of setting up an Islamist Emirate of Afghanistan once again, it does not recognise the Afghan government as legitimate and demands prisoner exchanges as a precondition for starting an intra-Afghan dialogue.

Despite a remarkable op-ed by a notoriously brutal Taliban leader vaguely stating the intentions of ending the war and opposing terrorism, the question arises if the Taliban have become any more progressive since ruling the country in the 1990s. After a full withdrawal of foreign troops, the Taliban will have numerous incentives to conquer more territory and neglect any intra-Afghan dialogue. The recent violent attacks against Afghan security forces show the fragility of the Taliban’s commitment to peace.

Since the US launched its intervention in response to the 9/11 attacks, the initial military aims to take action against the radical Islamist Al-Qaeda, and to prevent future safe havens for and attacks by terrorists have increasingly become intermingled with vague goals of democratisation, development and state-building.

The “Afghanistan Papers”, published by the Washington Post in December 2019 paint a shocking picture of the military mission in Afghanistan. In addition to the lack of an exit plan, there was no clear strategy on how to conduct the war, which counterterrorism goals to reach, and with which allies and which enemies. The public statements systematically portrayed a well-planned, successful mission while many involved personnel saw it as a chaotic, uninformed, and costly project. A definition of what to achieve was absent through all phases of the war, from fighting the Al-Qaeda-supporting Taliban after Osama bin-Laden had been killed, to building an independent Afghan security force to withdraw US troops.

The decision to withdraw US troops is now highly connected to the US presidential election in November, potentially allowing Donald Trump to claim to have fulfilled his promises to end military involvement abroad and “bring our troops home”.

…From Development and State-Building Efforts

Not only in military missions, but also  the humanitarian aid, development, and state-building efforts of the international community did the lack of local knowledge and the absence of security undermine sustainable progress. Even worse, civil society’s efforts were chronically underfunded and consequently framed as a “light footprint” by the UN.

The limited progress regarding women’s rights, literacy rates, and infrastructure were mainly due to the end of the Taliban’s fundamentalist rule; however, Afghanistan ranks among the worst-performing countries worldwide on the Human Development Index in 2019. With the outcome of a military budget of more than $2 trillion (of the USA alone) and a “light footprint” in development and humanitarian efforts, the international community must seriously address the relationship between military and development goals in future crises. After all, a well-developed country is a better counterterrorism measure than a fragile deal with a militant group who “will be killing some very bad people”.

The process of democratisation, part of the liberal paradigm at the turn of the century, produced a democratic constitution in 2004. However, the 2019 election shows how vulnerable the state of Afghan democracy has become. The two candidates for the presidency, Ashraf Ghani and Abdullah Abdullah can be regarded as fairly different: While Ghani is an academic technocrat who “talks the talk” of the international community, Abdullah is a polarizing figure deeply intertwined with Afghanistan’s turbulent history. After the rivals had cooperated in a power-sharing agreement since 2014, the 2019 election has been overshadowed by violence, fraud, and low turnout. Ghani was finally declared the winner in late February, but Abdullah contested the vote and held his inauguration ceremony parallel to the official one of Ghani. This stalemate poses severe danger to the intra-Afghan dialogue with the Taliban – in fact, the original starting date was delayed because of the intra-government rivalry. Meanwhile, violent attacks by the Taliban have picked up again, demonstrating the narrow window of opportunity for the peace process.

While the Doha agreement focuses on counterterrorism measures benefitting “the United States and its allies”, the absence of any schedules to end the war and construct a post-war order are left to the intra-Afghan negotiation. This process must be monitored by an “international group” that prioritises a stable peace for Afghanistan instead of the interests of the US-American electorate.

The most important part will be a local solution of political order as well as a societal model for the future. Therefore, it is essential that the differences between Ghani and Abdullah are overcome to a degree in which the government can negotiate as a credible actor with the Taliban. Crucial questions will relate to the future role of religion, especially related to women’s rights and inclusiveness. Arguably the most difficult task will be a Security Sector Reform which must gradually reconcile formerly opposing fighters, rebuild trust, and eventually set up diverse and capable police and security forces. The funding of the future government can provide leverage to keep all parties committed to constructive negotiations; in a foreseeably difficult process, the incentives for negotiations must constantly outweigh the incentives to resume the war.

However tempting a quick withdrawal of all foreign troops may seem, constructive negotiations about a post-war order are crucial to prevent a Taliban rule that reverses any progress in women’s rights, economic opportunity, and individual freedoms. After more than 18 years of getting military, political, and development efforts wrong in Afghanistan and leaving the population exhausted by war, a meaningful peace process by local actors must overcome political rivalries and external interests. After all, a stable and peaceful Afghan society will serve these interests best. If, however, the process does not result in an opportunity for Afghanistan to develop in peace, the country will not be any less of a safe haven for terrorist groups than in 2001 – and the humanitarian struggle will have been even more pointless.

Paul Kurreck is candidate for the 2020 Master of International Affairs at the Hertie School. He graduated from Freie Universität Berlin with a BA in Geography and has worked as student assistant at the Stiftung Wissenschaft und Politik (SWP) in Berlin. He is especially interested in peacekeeping, environmentally sustainable and democratic development of African countries and the geopolitical ambitions of China.