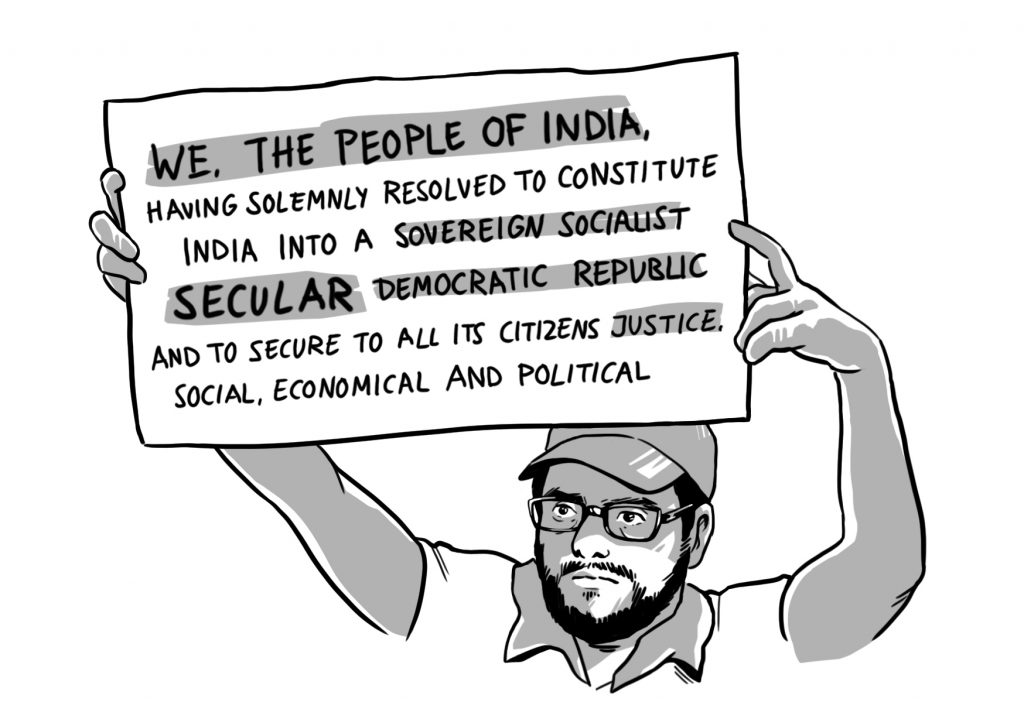 The first of a four-part series on the Citizenship Amendment Act 2019 (CAA) passed by Indian Parliament in December 2019 that has sparked a broad range of civil action and violence from the Modi administration. This article provides a background on the ongoing upheaval, listing out key actors and their stake in the movement.

The images of dissent, protests, violence, and brutality emerging from India since December 11th, 2019 have put Prime Minister Modi and his BJP government in a tough spot. It appears that the government’s sectarian politics is finally being challenged by an unprecedented show of resistance from all factions of the Indian opposition. Tens of thousands of protestors across nearly all major Indian cities, consisting of students, women, Muslims and non-Muslims have been demonstrating against an amendment to India’s citizenship law. These protests have been met with violent resistance from the State – police brutality, internet shutdowns, the imposition of curfews, and the invoking of draconian legislation such as sedition and libel laws. Nearly two months after the passage of the Citizenship Amendment Act, the Modi government seems to have realized that its latest move has not gone over well with either the Indian public or the international community. And yet, it shows no signs of backing down.

The Citizenship Amendment Act 2019 (CAA), passed by the Indian Parliament on December 11th, 2019, amends India’s Citizenship Act of 1955 to grant fast-track citizenship to religious minorities of Afghanistan, Pakistan and Bangladesh who, facing persecution, had to flee their homelands. These religious minorities, if they entered India on or before December 31st, 2014, will be given fast-track citizenship within six years. This is the first time that religion has been used as a criterion to determine citizenship – a move that has sparked protests across the country because of its “unconstitutional” nature.

The Act defines “religious minorities” as Hindus, Sikhs, Buddhists, Jains, Parsis and Christians – and explicitly excludes Muslims. So far, illegal immigrants could not gain citizenship in India – only legal residents could if they had been residing in India for over 12 years. The CAA gives people from the six persecuted minorities a new fast-track route to citizenship, while also waiving their illegal status. The BJP government’s reasoning for excluding Muslims is that they cannot claim to be “persecuted” minorities in the above-mentioned countries, owing to the fact that Afghanistan, Pakistan, and Bangladesh have Islam as their state religion. To directly quote the Bill: “The constitutions of Pakistan, Afghanistan, and Bangladesh provide for a specific state religion.” The Act thus excludes Muslim communities, such as the Hazaras, Ahmedias and Shias, who also face persecution in these Muslim-majority countries.

Although the government continuously asserts that the Amendment has merely made citizenship easier for persecuted minorities, and states that Muslims from the aforementioned countries can still seek citizenship, albeit without the fast-track process, the deliberate exclusion of Muslims has raised red flags. Several non-BJP led states have passed resolutions against the Act and have issued statements saying they would not implement it, although they do not have the prerogative to decide this. Simultaneously, Uttar Pradesh, a BJP-led state, has claimed to have already started groundwork on implementing the CAA, identifying eligible migrants to whom to grant citizenship.

While previous governments had a less polarizing approach to citizenship, several moves by the Modi-led BJP government in the last few months seem to explicitly discriminate against Muslims. Given the growing anti-Muslim and anti-minority rhetoric in the country, it is near-impossible to view this law without looking at the larger communal agenda at play.

The Who and The How

While Indian Muslims are not directly affected by the new law, there are reasons for concern stemming from the link between the CAA and the National Register of Citizens (NRC).

The NRC is an exercise which will enlist all Indian citizens on a national register, based on adequate documentation. Those who fail to provide adequate documentation risk being deemed “illegal immigrants” and will subsequently be stripped of their citizenship and sent to detention camps.

The NRC was originally an exercise exclusive to one of the northeastern states, Assam. Its implementation there drew harsh criticism when more than 1.9 million people had their names excluded from the first list in 2018. According to government sources, there are currently 1,043 people housed across six detention camps in Assam.

The 2019 CAA appears to benefit Hindus, Christians etc., in these detention camps (and otherwise) because if they can prove ancestry to Afghanistan, Pakistan or Bangladesh, they will be granted citizenship. For Muslims, on the other hand, the lack of the CAA as a fallback option will result in being deemed illegal immigrants. There are therefore genuine concerns that the combination of the NRC and CAA will affect Indian Muslims the most; these concerns have been furthered by the launch of a nationwide National Population Register (NPR), which is the first step and the data backbone of the NRC.

Other than Muslims, another community has been at the forefront of protests is North-Eastern Indians. The states of Assam and Meghalaya in the North-East have been subject to internet shutdowns and curfews since the protests began. However, their reasons for protesting differ from that of mainland India. The North-East, which is comprised of indigenous communities, has faced large-scale migration from neighbouring countries for decades. This migration has endangered the social, economic, and political fabric of the indigenous communities in the region. The North-East’s opposition to the CAA, therefore, does not stem from defending India’s secularity, but rather from protecting the indigenous communities’ right to autonomy, culture, and land from all migrants – irrespective of religion.

Additionally, other vulnerable communities, such as people from lower-income backgrounds, especially women and trans communities have traditionally faced more difficulties in obtaining the identification documents that will be accepted under the NRC. The NRC exercise in Assam saw many women excluded from the list because of a lack of documents pertaining to land, lineage, and education. While the list of necessary documents for the nationwide NRC is yet to be published, obtaining such documents generally requires individuals to have agency over their existence in Indian society – a privilege that women and trans communities systematically lack. For instance, many members of the trans community have been disowned by their birth families and do not possess any documentation at all. These communities have consequently also vehemently opposed the NRC. In summation, the protests are resisting not only the anti-secular nature of the CAA/NRC but also its anti-indigenous, anti-trans and anti-poor character.

Since December 12th, tens of thousands of people, a significant number of them women and students, have taken to the streets in resistance to the CAA and NRC. To say that the government’s response to protests has lacked a consistent narrative would be an understatement.

In attempting to “clarify” the law and educate “misguided” protestors, the government has engaged in nothing short of political gaslighting. Prime Minister, Narendra Modi, and Home Minister, Amit Shah, have given statements – many of them contradictory to each other. One such statement by Prime Minister Modi seemingly intended to backtrack the NRC altogether,  while the Home Minister delinked CAA and NRC, which were earlier to be implemented in ‘chronological’ order. Further, BJP’s political campaigns for state elections in Delhi and Jharkhand used violent statements such as ‘Goli Maaron Saalon ko’ (“shoot the traitors’’), which likens the protestors to anti-national elements that the country needs to get rid of. However, the scale of the violence that has descended upon peaceful protestors has not only unified and made them stronger but also attracted attention from international governments and media.

One thing is clear: despite months of protests, it appears that the government has no intention to pay heed to any criticism, – perhaps this is the most dangerous part of it all.

This chapter is the first of a four-part series covering the ongoing protests in India. The second chapter will dive into the presence and normalisation of violence as an element of the protests. The third chapter will focus on constitutional guarantees (or their absence thereof) since the beginning of the protests, and the State’s heavy crackdown on the right to dissent. The last chapter will conclude with the Supreme Court’s verdict on the Act and what it means for the people of India.

Subiksha Natarajan is a Masters of Public Policy Candidate. After graduating with a Bachelors of Economics from the University of Madras, she worked as a Research Analyst with McKinsey & Company in India for two years. Subiksha’s areas of interest include the media, cyberpolicy and intersection of business and human rights.

Geeti Patwal is a second-year dual degree student at Columbia University’s School of International and Public Affairs pursuing Masters of Public Administration with a concentration in Economic and Political development and specialization in Management. Her focus at SIPA is gender at an intersection of employment and impact investments. Geeti interned at the United Nations Economic and Social Commission for Asia Pacific (UNESCAP), analysing 53 Asia Pacific countries on different economic empowerment indicators for women. Prior to SIPA, Geeti spent 3 years working in Education and Urban Development in New Delhi, India.