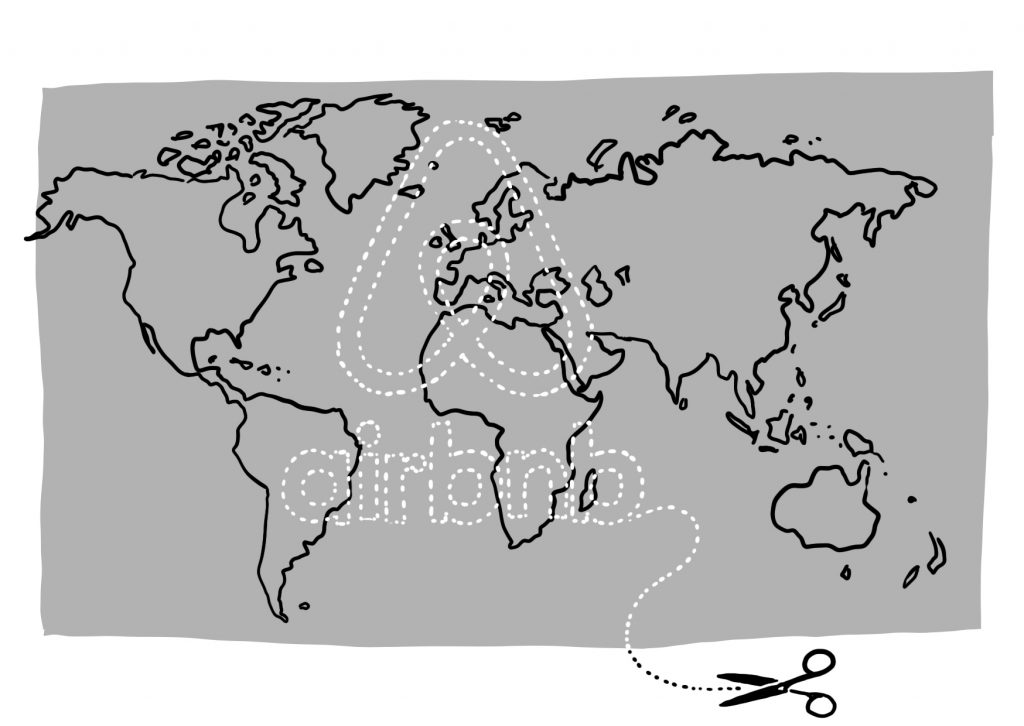 While European cities seek to reign in commercial-style Airbnb rentals through stricter regulations, these efforts may be hamstrung by a recent decision in Europe’s highest court. Airbnb is now two-for-two in a game of multi-level governance, having previously vaulted over city laws in the U.S., writes MIA ‘20 Liana Mehring.

Last August, I arrived in Edinburgh, Scotland, to attend a friend’s wedding. I had booked what looked to be a charming Airbnb, but when I arrived I found the place to be barely furnished, with little more than a sad container of instant coffee sitting on the bedside table. I shared my dissatisfaction with a wedding guest at the rehearsal dinner later that night. This man, who had lived in Edinburgh all his life, sadly shook his head in response. He said that rentals such as mine had become increasingly common in the city. These apartments were apparently bought up en masse, then continuously rented – mainly to tourists – as crude commercial enterprises, which drove up rents for local residents and limited available housing. Even as Edinburgh and other European cities have pushed back against Airbnb on these issues, the company will be allowed to dodge certain responsibilities after recently winning a battle in the EU’s highest court that will affect how the company is regulated in the future.

While cities have thus far shown some success in using municipal law to push back against Airbnb, they currently lack the authority to compel Airbnb to systematically police its platform for commercial rentals that are swallowing up cities across Europe. A key legal battle between Airbnb and the company’s local opponents hinges on whether or not Airbnb should be required to report detailed host data to governments – an undertaking which would require the platform to comprehensively monitor its online listings. On December 19th, the European Court of Justice (ECJ) ruled that Airbnb is not an estate agent but an “information society service,” effectively ruling in Airbnb’s favour. The outcome has made the multi-billion dollar company two-for-two in a high-stakes multi-governance game, building on the online platform’s success at winning a similar fight in the U.S. federal courts.

To understand the dynamics of the game, one must first understand the arguments used on both sides of the debate. Airbnb has a strong interest in being regulated as an information society provider. This designation would subject the company to EU regulations that cut across member states, while protecting it from strict local regulations that are applied to hotels. City governments, on the other hand,  want to crack down on Airbnb listings that operate much like hotels without being subjected to the same regulations. Suspected commercial abuse of the home-sharing platform could more easily be confirmed if Airbnb handed over data required by local authorities to confirm or refute the presence of illegal commercial listings in violation of local short-term rental laws. Airbnb has thus far steadfastly resisted complying with such data access requests, describing them as ‘overbroad and unduly burdensome.’

In 2018, the New York City Council passed a law in the summer requiring home-sharing services to provide the city with detailed monthly reports about tens of thousands of listings, including the identities and addresses of their hosts. The legislation was meant to make it easier for the city to enforce laws designed to root out bad actors, such as the more than 100 host accounts that were created to run an illegal hotel business in Manhattan through Airbnb. It is estimated that such enforcement could take an estimated 50,000 Airbnb units off the market. In its ensuing legal battle with the city, Airbnb claimed to be representing the interests of ordinary New Yorkers. While the city argued that clamping down on Airbnb was necessary to ensure affordable housing for its residents, Airbnb argued that tightened regulations would hurt these same ordinary New Yorkers by limiting their ability to rent spare rooms and make ends meet. Airbnb also claimed that the compulsory disclosure agreements constituted a form of illegal surveillance which would violate the fundamental privacy of its users.

In the U.S. as in the EU, Airbnb found a sympathetic ear above the city level by appealing to existing national or international rules and regulations. In January 2019, a U.S. federal judge, in exercising his multi-level governing authority, blocked the New York law concerning disclosure agreements from taking effect. The judge argued that the law was in violation of the US constitution, specifically the guarantee against illegal searches and seizures guaranteed by the Fourth Amendment, and voiced concern over the unreasonable precedent the law would set for other e-commerce companies. That precedent would require such companies to produce monthly copies of its records for all local customers to be handed over to investigative bodies in the absence of sufficient evidence of wrongdoing. As the judge wrote in his decision, “The city has not cited any decision suggesting that the governmental appropriation of private business records on such a scale, unsupported by individualized suspicion or any tailored justification, qualifies as a reasonable search and seizure.” The greater public interest, he decided, was the public’s right to privacy.

The EU Treaty, meanwhile, protects a fundamental freedom to deliver services. This freedom limits the ability of local authorities to set their own rules under the single market framework. Early in its European operations, Airbnb organized itself to flaunt local laws by developing a European-wide approach that took advantage of these laws that predated the collaborative economy, including the e-Commerce directive adopted in 2000. This directive stipulates that, while websites are obligated to investigate specific illegal listings, they aren’t required to systematically scan for such illegal activities on their sites.

One caveat is that local authorities may leapfrog e-Commerce restrictions by citing overriding reasons related to the public interest. EU member states and local governments argue that ensuring the availability and affordability of local housing is precisely the kind of vital public interest this language is designed to protect. However, the final arbiter in deciding what constitutes a viable public interest is the Commission itself. This makes the European Court of Justice the key player in determining Airbnb’s fate. An indication of how the court would rule came last April, when an advisor to the court stated that Airbnb should be treated as a digital service provider and be free to operate across the European Union. ECJ judges normally follow their advisers’ non-binding opinions, and this held true in their ultimate ruling.

Following the ECJ’s decision, European cities are likely to be stifled in their attempts going forward to regulate key aspects of Airbnb’s business, and the same goes for the U.S. should the company continue to enjoy favourable constitutional interpretation and federal protections. Back in Edinburgh, I concluded with my fellow wedding guest that he should run for local office and enter the fight for affordable housing. That fight, it appears, will not be an easy one.

Liana Mehring is a former exchange student (MIA) at Hertie from IHEID Geneva. She is majoring in Environment, Resources, and Sustainability with a minor in Global Health. Her ongoing research and work focus on dog-keeping practices as it relates to rabies prevention in low-resource settings, specifically in Kenya. She holds a Bachelor of Science in Foreign Service (BSFS) from the School of Foreign Service at Georgetown University, where she majored in Culture and Politics. She is passionate about art, the environment, human rights, animal welfare, travel, and the free exchange of culture and ideas.