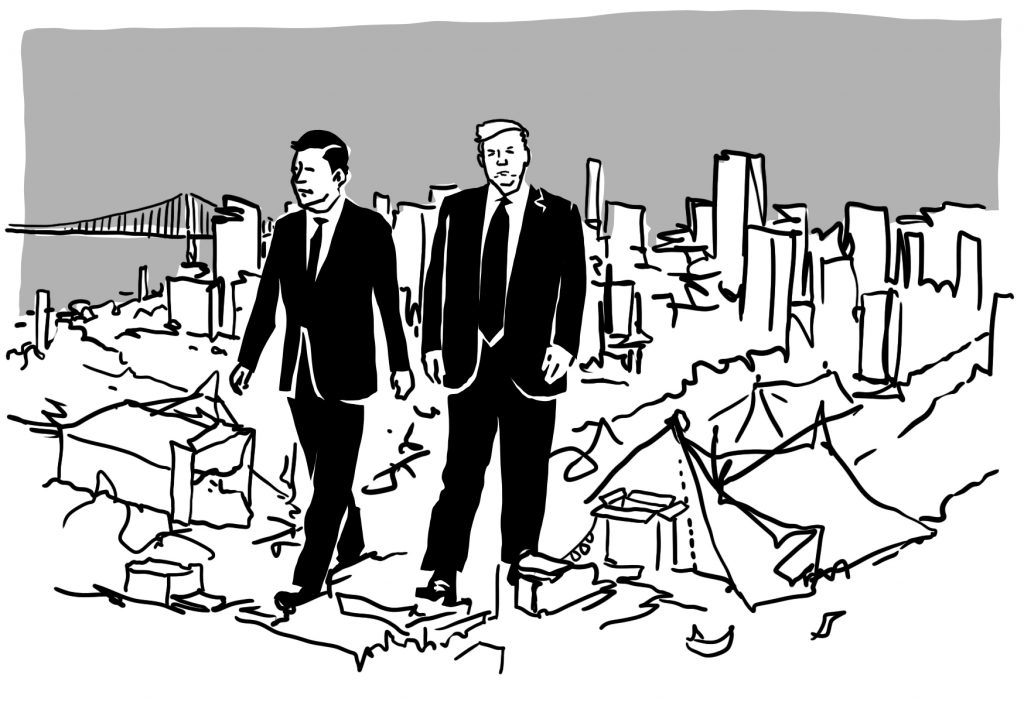 The White House has announced a pioneering plan to completely remove California’s homeless population of 130,000 by 2022 and rehabilitate them through an intensive work-based programme.

If Donald Trump were to take on the homeless crisis in California in the coming days, it would sound something like this:

California’s homeless populations have menaced local residents over the past decade, riddling the streets of the nation’s largest economy with used hypodermic needles, faeces, and makeshift tents reminiscent of the Hoovervilles of the Great Depression.

“It is just horrific. You walk down the streets of San Francisco and Los Angeles and it looks like you are in a third world country! We need to make California great again and clean up these streets,” exclaimed President Donald J. Trump on Air Force One last week.

After returning from his recent trip to California, President Trump announced his plan to end California’s homelessness epidemic. Aptly named Get to Work!, the initiative aims to identify, relocate, and rehabilitate the estimated 130,000 Americans living on California’s streets. The White House insists the programme will come at no additional cost to taxpayers.

The State of California receives over $400 billion in annual revenue from the federal government. The White House plans to reappropriate around $2 billion of that funding to address the homelessness problem by building twenty privately-run rehabilitation camps and establishing a ‘Homeless Security’ force throughout the state over the next three years.

“The danger these people pose to the general public is unprecedented, so President Trump created a great plan in line with American values to get them back to work,” said White House Advisor Kellyanne Conway. The Homeless Security force will identify and remove homeless people from the streets and bring them to the camps, where a one-year programme will rehabilitate and educate the previously homeless on American work values before a two-year work programme ensues.

Work in the programme includes civic-minded trades, such as the construction of water infrastructure and wilderness firefighting. The programme is set to fund itself through the work generated by the previously homeless participants. CoreCivic Inc. has agreed to build and operate the rehabilitation camps, while Blackwater will be the primary contractor for the Homeless Security force.

“Our great federal contractors have experience with these types of folks already from their work in Iraq and the border,” said President Trump as he confirmed the Get to Work! contractors. Whilst many Americans may recognize Blackwater for its controversial contracts with the US government during the Iraq war, CoreCivic is less of a household name. It currently operates detention facilitates for Immigration and Customs Enforcement (ICE). According to recent research from the Urban Justice Center, CoreCivic receives nearly half a billion dollars from their ICE contracts each year. The ICE made headlines in 2018 for separating immigrant children from their parents at the Mexican border and holding the children in detention facilities for indefinite periods, many of which CoreCivic operates.

Kamala Harris, former California Attorney General and democractic candidate who recently dropped out of the 2020 presidential race, condemned Trump’s Get to Work! programme. “We don’t welcome private prison contractors in our state. Why would we welcome those same companies to detain our homeless population?”

However, an existing programme for California’s inmates echoes Trump’s Get to Work! plan for the homeless. Nearly 3,100 inmates live in 43 ‘Conservation Camps’ operated by California’s Department of Corrections and Rehabilitation. The majority of the Conservation Camp inmates fights California’s harrowing and increasingly common wildfires. 400 inmates fought the recent Kincade fire in Sonoma County and received a wage of $2.90 per day. Conservation Camp inmates practice other civic-minded trades in addition to firefighting, such as clearing brush to prevent fires and sandbagging to prevent flooding.

“You know, we’re really killing a lot of birds with one stone with this one,” elaborated Advisor Conway confidently on President Trump’s Get to Work!. “We’re helping the homeless get jobs, providing business to great American companies, and addressing those awful fires over there.”

California Governor Gavin Newsom, Democrat and former Mayor of San Francisco, did not respond to requests for comment.

Maxwell Philp completed his Bachelor of Science in Applied Psychology at New York University. He is a candidate for the Master in International Affairs programme at the Hertie School in Berlin, where he has been based for the past three years. In between his studies, his multi-sector work experiences have taken him from boardrooms in Beijing to racial bias trainings for police officers in his home state of California. Maxwell is passionate about protecting people’s civil liberties and preventing society from entering a late-capitalist dystopia.