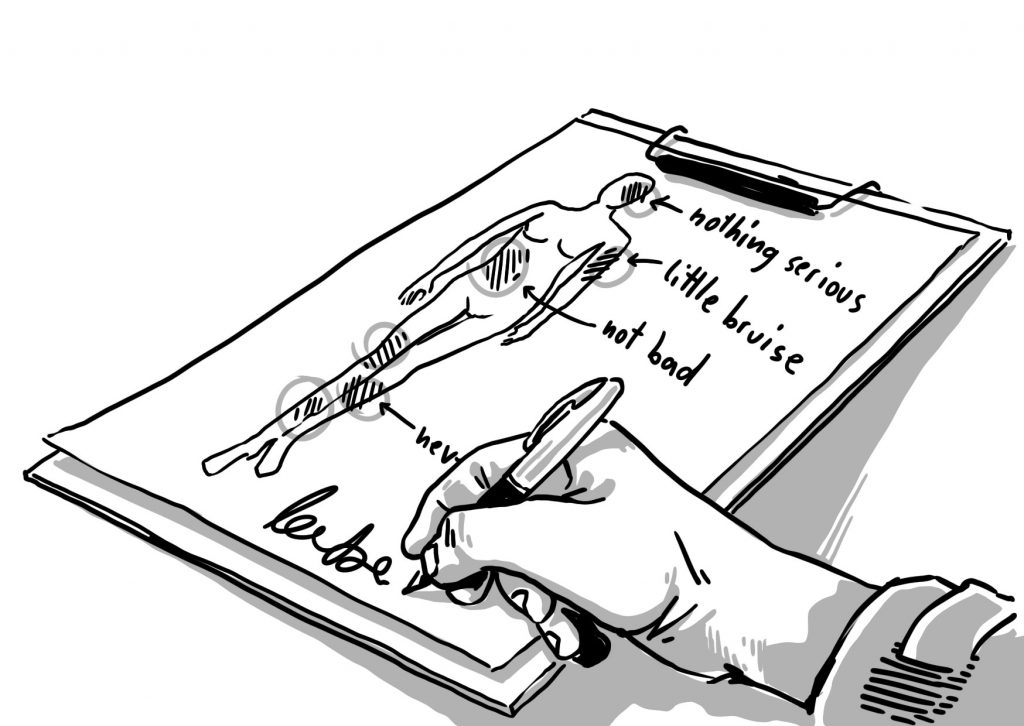 Governance Post Editor Babatunde Williams looks at the macro and micro failures of protecting victims of domestic abuse in the UK and points to evidence that taking reporting seriously, increasing training, and removing hurdles to help serve as neccesary steps to reducing the problem

On the 12th of August 2017, mother-of-two Laura Stuart was walking home in the early hours after a night out with friends in North Wales. She would never reach the door to her house. Jason Cooper, her ex-partner, approached and stabbed her repeatedly with a kitchen knife. Even as she lay there dying, witnesses saw him kick her in the head “like he was taking a penalty”.

What sets Laura and other domestic abuse victims apart from victims of other crimes is that she might have expected her own death, having been threatened repeatedly by Cooper in the days preceding her murder. She, her family, and neighbours informed the police on 18 different occasions about Cooper’s violent outbursts and daily attempts at coercion in the two years leading up to her death. Not once did police officers offer Laura Stuart the support of high-risk domestic violence services – even though her life was clearly in danger.

In the UK, the two institutions that most high-risk female victims of domestic abuse approach for support are their local police force and healthcare practitioners (HCPs). As such, these two groups are key not only to bringing perpetrators to justice, but also to ensuring that survivors are signposted to the necessary services that support victims as they attempt to rebuild their lives. All of the data to hand shows that HCPs and Police Officers are failing to do so – including in high-risk cases.  In other words, the failure of the police and HCPs to respond to the 18 reports by Laura Stuart and her family and friends was not an isolated case but rather, sadly, is a repeated cultural norm.

In 2017-18, the average high-risk domestic abuse victim endured 3 years of abuse from their partner before leaving the relationship – eight months longer than the average in 2016-17. During this three-year period of abuse, most victims sought institutional help to leave the relationship on at least five different occasions, including more than twice in the 12 months before successfully escaping their abusive relationship. 72% of women who eventually entered high-risk care said that they had asked their doctors and nurses for support in the preceding year, but only 7% of these women were subsequently referred on by those same HCPs.

To understand how the police and HCPs have continuously failed women attempting to escape abuse, we must first look at the system within which they operate.

The British approach to identifying and supporting high-risk survivors of domestic violence works on a referral model to a local group called MARAC. A Multi-Agency Risk Assessment Conference (MARAC) consists of healthcare professionals, police officers, social services, and independent domestic violence advisers (IDVAs). MARAC members support victims through the recovery process, update each other on key developments and ensure that the perpetrator is being monitored or brought to justice.

After six months of MARAC support, 60% of victims have no further repeated incidents. This is a phenomenal statistic, considering the notoriously high recidivism rates associated with domestic abuse. The benefits of a MARAC are also financial. Every case of domestic abuse costs the government an average of £20,000 in police time, health, and social care costs; in reducing recidivism it has been calculated that for every pound invested in a MARAC, the British government saves six.

For those who have been identified as victims of abuse, the MARAC system is clearly working, albeit far too late, considering the aforementioned average of three years most victims endure before they can escape the confines of their abuse. As in the case of Laura Stuart, the problem therefore must be addressed earlier in the process.

Police officers and HCPs determine whether or not to refer an alleged victim of domestic abuse to a MARAC through answering a series of questions on a form called a risk register. Should a complaint meet the threshold for high-risk, they are required to pass on the details of victims to a local MARAC. Some answers are weighted more heavily than others. For instance, the existence of children in an environment where physical violence has been suggested but has not yet occurred is deemed as high-risk1 – but slapping your partner in a household without children would not be deemed as such.

However, research conducted by the College of Policing in 2017 found that unlike other institutional participants of a MARAC, such as social and women’s services, many police officers had not been trained on how to complete a risk register, despite the system being in place for two years. Unsurprisingly, in any given police force, 45-60% of officers who had been designated to respond to domestic abuse were “unconfident” in their ability to use the registers, with just one or two designated officers per police station receiving official training. According to the College, this meant that victims suffering from less obvious forms of abuse, such as coercion, stalking, and financial control, were often [incorrectly] deemed lower risk than victims experiencing physical abuse. As a result, most victims required multiple police visits – with the abuse no doubt continuing in the meantime – before they were referred to a MARAC. This means that a woman seeking help faces a lottery of timing; does a trained member of staff happen to be on site when she calls the police for support?

The situation with HCPs is vastly more disturbing. Earlier this year,the research agency YouGov asked patient-facing HCPs to consider the quality of the training they had received to identify victims of domestic abuse2. Whereas the College of Policing has at least firmly accepted that it is within their purview to tackle domestic abuse, not just from the perspective of justice but also support for the victim, one in three patient-facing HCPs do not feel that domestic abuse is their problem.  When broken down, this figure also raises questions on the distinction between private and public approaches to healthcare more broadly, with 46% of private HCPs stating that identifying domestic abuse was not their responsibility, in contrast to 26% of public HCPs saying the same thing. Unsurprisingly, YouGov found that 42% of all HCPs had received no training  to identify abuse whatsoever.

It is clear that the reason women in need of MARAC support are not being identified is due to a lack of training and, worse still, a lack of willingness by authorities to identify them as high-risk victims of abuse.

Multiple police and healthcare visits are an expensive exercise – not to mention the trauma induced by asking a victim to relive experiences of abuse on several occasions. Each high-risk abuse case costs the police and health services on average £3,600, or £3,160 when accounting solely for police house visits and health check-ups. Ensuring that police officers and HCPs working with abused women have the required training to be able to read, understand and use a risk register costs £87 per certificate. This means that for every £1 spent on training, a police force could save £28; assuming only one call-out is needed3. And amongst HCPs, estimates show that over the course of a year the costs to hospitals of working with domestic violence victims who have been successfully identified by a risk register and are receiving support fell by 41% due to fewer health needs, such as mental health support or treatment for physical abuse.

Women leaving abusive situations are often portrayed as people who can’t make up their minds, trapped in a tainted love. This is false and infantalises the many women who have made the choice to seek help to leave abusive relationships, but have instead been failed by an inadequate identification system. Currently, MARAC is improving the lives of those who come into contact with it. However, many women never reach a MARAC. Beyond the obvious benefit of freeing up police and HCP time and resources, improving their ability to read risk registers would ensure that women like Laura Stuart, at the time they ask for institutional help, receive it.

If the contents of this article have affected you in any way, please visit http://www.frauundberuf-berlin.de.

Babatunde Williams – is a class of 2021 Master of Public Policy candidate at the Hertie School of Governance. He graduated with a degree in History and Politics in Britain. His experiences centre on violence reduction and public health.

1 In Laura Stuart’s case, the existence of two children in an environment where physical violence had occurred should have been enough to ensure her entry into a MARAC, which would have most likely saved her life. However, on four separate occasions, the attending officer failed to complete a risk register.

2 Disclaimer: I supported the design of the research questions.

3 This is taking into account that the average police visit costs £1,200, and police are called on average of three times for every victim of abuse.