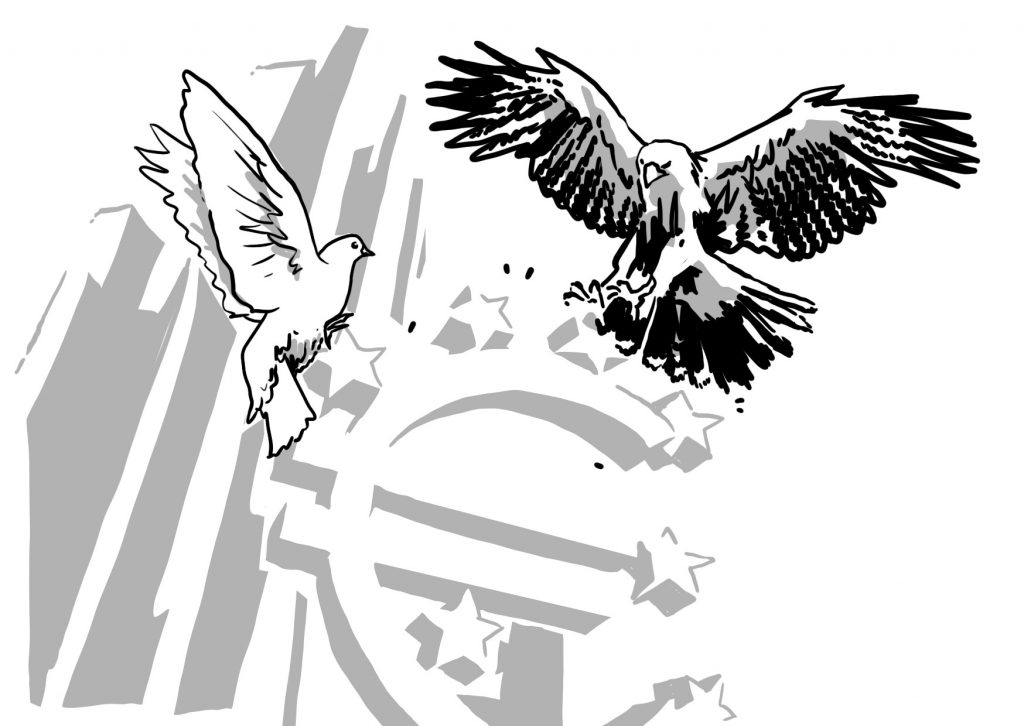 The European Central Bank’s (ECB) policy meeting in September was strained by dissent over the decision to launch another monetary easing package. Governing council members disagreed on the economic outlook, interest rates, and, most notably, new bond purchases. The spate of dissent over the institution’s latest monetary stimulus highlights the conflict between monetary doves and hawks at the ECB and reflects some deeper tensions between Member States as core Eurozone countries resisted Draghi’s bid.  More than that, it also points to the fact that monetary policy is approaching its economic and political limits in bolstering Eurozone economic growth.

In Oscar Wilde’s play, The Importance of Being Earnest, Miss Prism prompts her student, Cecily, to do her readings in Political Economy while she is away. The patroness advises her young student to omit the chapter on the Fall of the Rupee as it is somewhat too sensational, remarking that “even these metallic problems have their melodramatic side”. How right Miss Prism was. Last month’s contentious meeting of the European Central Bank’s (ECB) Governing Council was nothing short of melodramatic. The ECB became engulfed in its biggest public spat in years. It seems people in Europe are not only divided by weather, religion and cuisine, but also by monetary policy. The current economic slowdown has prompted a larger debate about the reorientation of economic activity across the Eurozone, causing disagreements between policy makers and Member States over the right course of action and pitting conflicting interests against each other.

Last month the ECB pushed interest rates further into negative territory and revived its €2.6tn bond-buying programme. This was followed by a fierce backlash from members of the ECB’s Governing Council, with Germany’s representative on the institution’s Executive Board, Sabine Lautenschläger, quitting in protest. Dissent is coming Austria, the Netherlands, Estonia, and other usual suspects that oppose quantitative easing (QE) when it was launched back in 2015 as well. Nowhere is opposition towards the ECB’s monetary stimulus package stronger than in Germany where senior figures have been accusing the bank of expropriating money from the country’s savers in order to bailout profligate southern states.

Bundesbank president, Jens Weidmann, has been the leading opponent of the ECB’s bond-buying programme since it was launched back in 2015. While recent tensions stem from the personal preferences of those who make up the Governing Council, they also highlight the fact that the ECB is not a normal  bank. It is the only central bank to serve a confederation of countries and we can expect their conflicting interests to be embedded in its decision-making processes. We then assume that, at least to a certain degree, central bank presidents also vote for monetary policies that correspond with their respective countries’ national preferences.

First of all, the rift at the ECB reflects the long-standing conflict between monetary hawks and doves. In general, hawks are members who want a tighter monetary policy in order to temper inflation and growth, while doves encourage a looser monetary policy to support growth and inflation. Historically there has been no shortage of dissent in the ECB’s Governing Council between the two sides, but the intensity of the ongoing rift has prompted Carsten Brzeski, Chief Economist at ING Germany, to dub the latest spat a “War of the Roses”.

A notable difference right now is that members who have previously taken a more dovish stance, such as Benoit Coeuré, have shifted to a more hawkish position in response to restarting ECB bond purchases reasoning that the timing is unwarranted. Similarly, members who have taken a more hawkish position in the past, such as Yves Mersch, have shifted to a more dovish stance now.

The map below depicts where central bank governors and Executive Board members stand on the issue of the ECB’s monetary loosening measures as per last month’s meeting of the Governing Council based on country of origin. Full support refers to those who unequivocally support the measures. Partial Support refers to those who expressed doubts but ultimately agreed to back the package, such as Yves Mersch and Luis de Guindos. Partial Disagreement refers to those who do not oppose the stimulus on principle, but disagree on timing or technicalities. Full Disagreement refers to those who oppose it on principle, such as Jens Weidemann and Sabine Lautenschläger, both hailing from Germany. It is worth noting, however, that members of the ECB’s Governing Council sit as individuals and not as national representatives, and formal votes are rare.

Opponents of the ECB’s monetary stimulus say the measures are disproportionate given the already low bond yields and negative interest rates. Others warn about the adverse effects the stimulus has on financial markets, all while downplaying the risk of deflationary pressures. ECB doves support last month’s measures by pointing towards the surprisingly prolonged low inflation in the Euro area and the need to ward off the threat of deflation and economic slowdown.

However, these arguments go beyond mere technicalities. The ECB is also driven by conflicting national interests that are embedded in its decision-making processes.  More so, the strife at the ECB reflects wider Eurozone conflicts between the fiscally conservative member states and those which are opposed to fiscal retrenchment. The conflict also presents elements of the North-South divide and Core-Periphery dynamics. More than a decade after the the financial crisis, conflicts within the bloc reflect the divergence of interests between the northern “core” and the southern “periphery”.

It’s already well established that there’s a North-South divide in the interest rate preferences of Member States, which is mirrored by the relative strength of their economies, as well as their specific growth models, employment, and inflation. Different economic contexts reflect, to a certain degree, the clash of interests among Eurozone Members States. Until fairly recently, the threat of deflation in Germany was low, with core inflation (excluding energy, food, alcohol and tobacco) at almost 1.5% per year. Countries like the Netherlands and Estonia are nowhere near deflation either, with core inflation over 2%. On the other hand, the Eurozone as a whole is experiencing an excessively low rate of inflation and there’s little prospect of it picking up anytime soon. Member States such as Italy, Portugal, Spain, Greece, Ireland and France hover around or below the Euro area average. A more severe downward shock could push these countries into deflation.

This can explain the position of some frugal countries that stand by their savers. After cutting rates further into negative territory, Germany’s Bild accused ECB president Mario Draghi of “sucking dry” the accounts of Germany’s savers, while the Dutch government has spoken out against the latest stimulus measures arguing that negative interest rates are disproportionately affecting Dutch pension funds.

There have been numerous claims, emanating from the financial and political circles of the Eurozone’s surplus-based, export-led economies – such as Germany and the Netherlands – that the ECB makes policies in favour of southern member states.  Just last week, a group of former senior European central bankers, most of them known for having a hawkish view on monetary policy, have accused the ECB of the monetary financing of government spending. They also hold that the intent of these measures is to “to protect heavily indebted governments from a rise in interest rates…” The graph below shows the level of public debt of individual countries based on the level of support for the ECB’s stimulus.

Accusing the ECB of catering to the bloc’s debt-ridden southern states may be a bit of a stretch. While the bloc’s most indebted members have been generally supportive of the resumption of QE, they are certainly not alone in this. It is true that highly indebted countries have benefited a lot from the ECB’s loose monetary policy due to their large stock of eligible bonds. However, lower debt-service costs have been beneficial to countries with lower levels of public debt as well, including Germany.

Not long ago, excess savings in the North were matched by excess spending in the bloc’s southern and peripheral members. However, fiscal and structural reforms after the European debt crisis have turned them into savers as well. Yet, it’s hard to imagine those countries have a strong appetite for another round of austerity measures and structural reforms anymore.

The only area in which the ECB’s Governing Council found agreement was fiscal policy. All members agreed that monetary policy is not the only game in town anymore and governments with fiscal space should do more to pull their weight and loosen their purse strings. The current rift at the ECB highlights the fact that monetary policy is approaching its economic and political limits in dealing with sluggish growth in the Eurozone. Mario Draghi said the ECB could still do more to boost inflation, but the current stimulus will last a long time and be less effective in the absence of fiscal policy efforts to stimulate growth in the Eurozone. Countries like France, Italy and Spain don’t have much room to spend, but the pressure is mounting on Germany and the Netherlands, both from institutions and other Member States.

With the ECB divided over the merits of further monetary stimulus, the key question is if Draghi’s successor, Christine Lagarde, will be able to manage the vested interests involved in the ECB’s decision-making processes. Besides this, she will also have to convince governments with fiscal space to spend more. Hopefully that will happen before Europe is caught up in the midst of another crisis.

Andrei-Bogdan Sterescu is a candidate for the Master of Public Policy at the Hertie School in the Dual Degree programme with Sciences Po Paris. His ongoing research focus is on the interaction between political and economic processes in Europe and EU Economic Governance. He has a multidisciplinary background, having graduated from Sciences Po Paris with a B.A in Social Sciences.