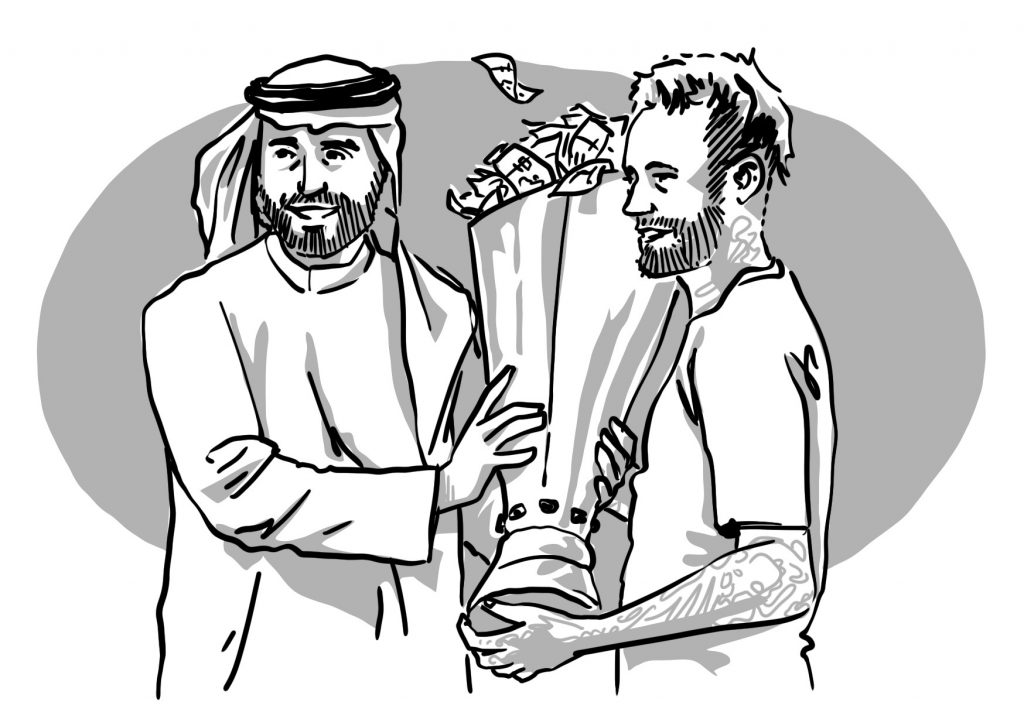 Facing an international public relations crisis following the death of journalist Jamal Khashoggi, Saudi Arabia is leaning on a few famous athletes to help soften its image. MIA student James Gahee looks at how the kingdom is using sports diplomacy as a soft power tool to obscure its questionable human rights record.

In early October 2018, Jamal Khashoggi, a Saudi dissident and journalist for The Washington Post, nervously paused in front of the Saudi consulate in Istanbul. Khashoggi needed to complete paperwork to prove he had the legal right to marry his Turkish fiancée, Hatice Cengiz. He paced along the entrance for about 20 minutes before removing his two phones and giving them to Cengiz. Khashoggi’s last words to her before disappearing inside the consulate were, “See you later, my darling.” He was killed and never heard from again.

A few weeks later, Novak Djokovic and Rafael Nadal were sitting in a press conference room in Paris prior to the Rolex Paris Masters tournament – a tournament held at the end of the tennis season. The two tennis superstars were defending their decision to take part in a lucrative exhibition match engineered by the Saudi government, amidst calls to withdraw over the murder of Khashoggi.

“Well, I personally always try to be very apolitical,” Djokovic began with. “Right now, we just don’t have enough information,” he continued, before quickly moving on to questions regarding his participation in the Parisian tournament.

One must wonder what additional information is required to comment on a regime that denies basic human rights to women, migrant workers and the LGBT community. Or one that  routinely censors the press and other forms of media, and engages in war crimes against civilians in a three-year long proxy war in Yemen. The connection between these two events – the killing of a dissident journalist and a scheduled exhibition between two stars of the sports world – is not coincidental. It is part of a calculated plan by the Saudi government to build its international stature while obscuring the government’s daily human rights violations.

Vision 2030 is a grand modernisation plan conceived by Saudi crown prince Mohammed bin Salman (MBS) aimed at bringing about significant changes to the country’s economy and society. Announced in April 2016, the plan focuses on reducing Saudi Arabia’s dependence on oil, diversifying its economy and developing public service sectors such as health, education, recreation and tourism. In November 2016, the government started investing in sports. A Sports Development Fund was created, allowing for an influx of capital towards the construction of new facilities, contributions to the privatization of sports clubs, and increased efforts to attract and promote international sporting events. Proponents of Vision 2030 hailed this as a step towards opening the Saudi state up to the West and its ideals, particularly by following it with the announcement of Princess Reema bint Bandar bin Sultan as the first female president of the Saudi Federation for Community Sports. These policies appear reform-minded, but they fail to address the systemic oppression faced by many in the kingdom. The appointment of Princess Sultan seems superficial when Saudi Arabia ranks 138th out of 144 nations included in the World Economic Forum’s Global Gender Report.

Khashoggi’s death ignited a genuine international crisis for the Saudi regime by putting a focus on its brutality. But the Nadal-Djokovic exhibition, among many other sports-related public relations endeavours, is just one example of the government’s effort to maintain a positive external face in the wake of pressure from the international community. A little more than a week after Khashoggi’s disappearance, Saudi Arabia hosted a football friendly pitting Argentina against Brazil – showcasing football stars Neymar, Paulo Dybala and Phillippe Coutinho to a global audience. More recently, FIFA president Gianni Infantino has announced that FIFA is considering an expansion of the 2022 World Cup to Saudi Arabia. This proposal has, unsurprisingly, come under fire from human rights groups, including Amnesty International, decrying this as another attempt to obscure the violations committed by Saudi Arabia.

Sports diplomacy has been used throughout history as a means to influence diplomatic, social and political relations. Ping Pong Diplomacy of the 1970s, when a delegation of table tennis players from the United States met their Chinese counterparts in Beijing, spurred a reestablishment of relations between the two powers. Boxing legend Muhammad Ali frequently used his platform to speak out against the Vietnam War and the ongoing marginalisation of African Americans and Palestinians. And one cannot look past the controversial history of Berlin’s largest sporting venue, Olympiastadion Berlin. Initially used as a stage to promote Nazism to the world, African American track and field athlete Jesse Owens single-handedly crushed Adolf Hitler’s myth of Aryan supremacy by winning four gold medals at the 1936 Olympics.

Saudi Arabia’s use is different. MBS cleverly uses sports diplomacy as a soft power tool to disguise Saudi Arabia’s poor humanitarian record, while touting its domestic benefits and international prestige to the world. Their decision to invest in sports facilities shows an interest in the benefits that perceived social change can provide. What embodies progress more than a stadium full of adoring, cheerful fans enjoying themselves on a night out? The regime’s ability to attract internationally renowned athletes demonstrates MBS’ effectiveness at using sports diplomacy as a strategic tool to elevate Saudi Arabia in the international arena — all while MBS’ own citizens remain restricted under an illusion of change.

By the way, the exhibition is off – due Nadal’s ankle injury. Saudi Arabia’s questionable use of sports diplomacy will continue to be normalised unless our star athletes use their platforms and take a stand against injustice – something Khashoggi himself realised, even posthumously.

James Gahee is a Master of International Affairs candidate at the Hertie School of Governance. Originally from Southern California, he graduated from the University of California Berkeley with a BA in Political Science and Middle Eastern Studies. James is particularly interested in issues related to corruption and the intersection of sports and politics. In his spare time, you can catch him hyping up California and dominating his fantasy basketball pool.