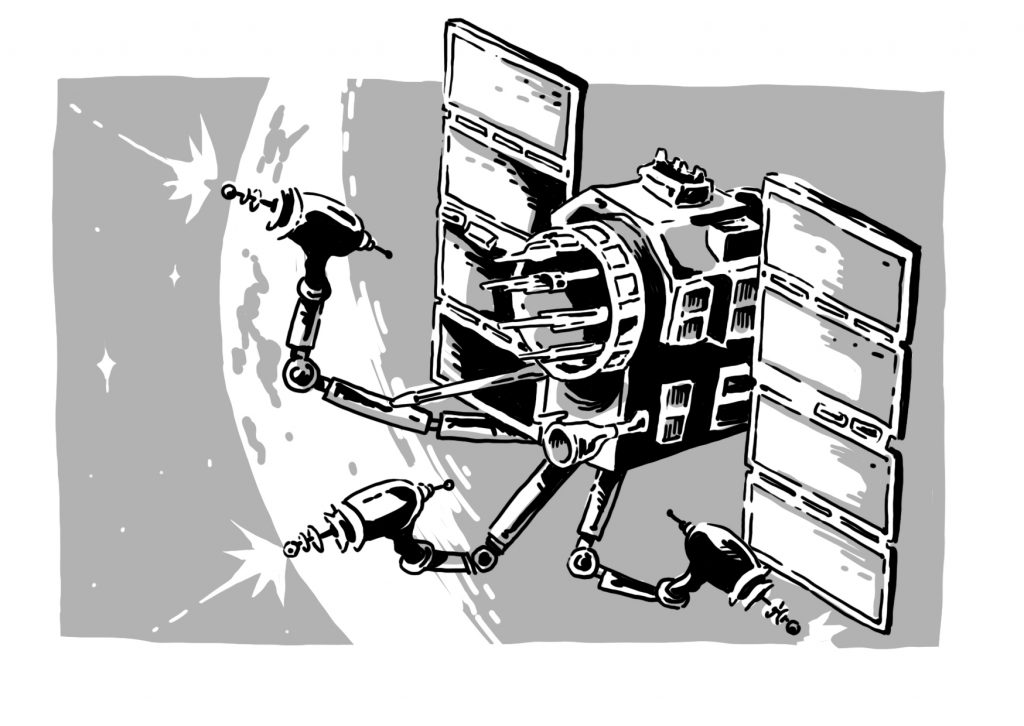 Should we take a moment to think before we dismiss the idea of a space force? MIA student Paige Higbie makes a case for considering Trump’s touting of space armament

Back in June, when US President Donald Trump announced his intent to create a ‘Space Force’ during one of his infamously wandering monologues, the global chortling was audible. Trump was letting his age show, they declared, by harkening back to the debonair Kennedy’s Space Race. The classically Trumpian twist of introducing an interstellar pissing match to the general geopolitical mayhem was proof, it was said, of the man’s juvenile predilections and unsophisticated understanding of his role as president.

Much as I enjoy lampooning the US president, and I do, this subject deserves a little more scrutiny than the partisan target practice it seems to have become. Because, the truth is, this was not Donald Trump’s idea. He is just the unfortunate mouth-piece for an idea that has long been nurtured by a strong cadre of supporters within the halls of power in Washington.

The ‘What’ being presented to the public is, more or less, straightforward: the specific framework for this newest branch of the US military is to be made up of a triad of interconnected institutions;

And the administration is certainly not being furtive about the ‘Why”. It’s about Russia and China. Orbital dominance is a fairly expensive proposition, meaning that, up there, there are only three real players (along with their attendant cast of bandwagoning characters); Russia, China and the United States. This is absolutely a ‘Great Game’ reboot. But, this time, it’s on a frontier of conflict with little consensus as well as fewer actual rules. And, according to Thomas Gonzalez Roberts of the Atlantic, the United States has the most to lose of the three.

Space is special. In the first place, orbit offers a perfect perch from which weapons could strike anywhere on the earth’s surface with relative ease. Strap a missile launch system to a commercial satellite in low earth orbit and once every 24 hours your payload is 2,000 km from whatever target you might wish to hit. To put this into perspective; 2,000 km is approximately the distance from Berlin to Moscow and is 500km less than the current range of North Korea’s nuclear capable Hwasong-10 intermediate range ballistic missile. Bump that satellite up a level to geosynchronous orbit, your missiles can be pointed at a single target twenty-four hours a day and negotiating is always a lot easier when you have a gun to your opponent’s head.

The second reason why space is special is because it’s also home to the backbone of the planet’s international telecommunications infrastructure. The reason that the US has the most to lose from the militarization of space, in addition to the profound geo-strategic implications, is that almost half of all operational satellites are owned and operated by either the US government or American commercial ventures. That is twice as much as Russia and China combined.

Regarding space, the Russians and the Chinese haven’t been particularly well behaved as of late. In 2015, Russia revived is Russian Space Forces followed shortly thereafter by China, which introduced the innocuously named People’s Liberation Army Strategic Support Force (focused on cyberwarfare and space). More money being pumped into these ventures in addition to some orbital line-fudging on current norms of space demilitarization have made Americans nervous. Examples of orbital line-fudging includes China investing in hypersonic missiles that can evade US detection and take out satellites from the ground. There may be no weapons in space, as per the status quo, but at least one of America’s major adversaries in space is spending the money to make sure that orbit is no longer off limits.

According to Vice President Mike Pence, who has become the project’s primary cheerleader, the Chinese and the Russians are developing increasingly adversarial positions to US interests in space. Both countries have anti-satellite attacks built into their war protocols. But there are subtler ways than simply blowing American satellites out of the sky.

The advent of so-called space drones able to repair satellites in orbit are in advanced stages of development and will save both state and commercial ventures millions in maintenance costs. But, as William Shelton, a former of the US air force space command has said, the difference between a service spacecraft and a weapon is merely a “change in intent”. If you can fix a satellite you can break a satellite and, in the vacuum of space, who ever thought we would need to dock a camera on a satellite’s exterior to make sure an enemy space drone wasn’t slicing at our fuel cables? At least five Russian spacecrafts, so called “space-apparatus inspectors”, have already conducted rendezvous operations in orbit. This stuff is already possible. And maybe that is something the US should be worried about.

Paige Higbie is a class of 2019 Masters of International Affairs candidate at the Hertie School of Governance, having thoroughly learned her lesson after 3 years in corporate finance. She graduated with a Bachelor of Liberal Arts from Oberlin College and has taken on the the role of sub-editor of the digitisation, innovation and technology segment of the Governance Post to legitimise her blossoming intellectual love affair with all things cyber security and cyber policy. Her bad habits include a pathological consumption of the Economist, an almost complete inability at ‘small-talk’ and a tendency to use uncomfortably long sentences as evidenced here.