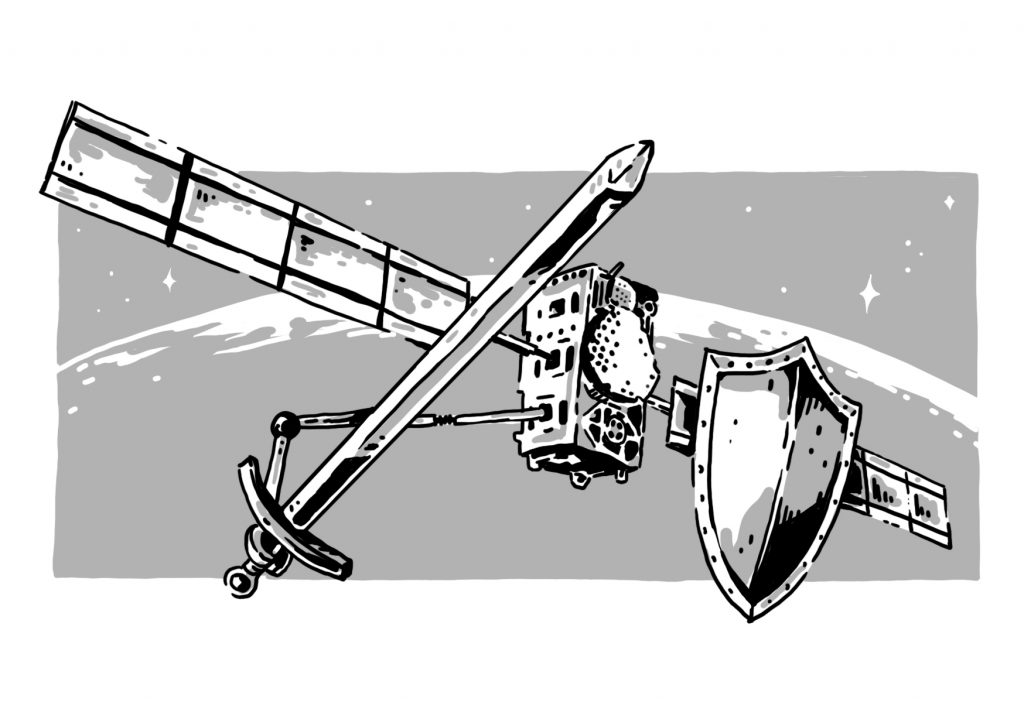 As the militarisation of space rises to the forefront of US defence plans, an understanding of what this would entail and mean for the world’s major players becomes necessary. MIA student Zach Larkin lays out the current landscape of the weaponisation of space and considers why such a development may even be necessary

Despite the ridicule Donald Trump received when he proposed a “Space Force,” it is nonetheless necessary to consider the potential militarisation or otherwise defence-oriented use of outer space.  Since the 1950s, the US and the former USSR have had a long history of developing space weapons ranging from anti-satellite (ASAT) weapons to weapons that could drop nuclear bombs from space.

Recognising the obvious danger posed by nuclear weapons in space, the superpowers enacted the Outer Space Treaty (OST) in 1967, which bans the stationing of weapons of mass destruction in space.  The 1972 Anti-Ballistic Missile (ABM) Treaty later prohibited the testing and deployment of ABM systems in all mediums, including space, by the US and USSR.  These two treaties regulated outer space to a degree, but the lack of augmentation with additional space governance agreements has left loopholes that threaten the future of interstate peace, both on Earth and in space.

First, the OST fails to address weapons like conventional missiles that do not count as weapons of mass destruction.  The ABM Treaty was not solely focused on space governance and also allowed surface-to-air missiles and non-missile weapons with ASAT capabilities to exist.  Drafts of ASAT weapons treaties that would have broadly prohibited the deliberate alteration of the orbital trajectory of other states’ space objects have been proposed, but never passed.  In reality, it is improbable that such an agreement ever will enter into force.

Modern ballistic missiles used for conventional warfare can easily reach altitudes of over 1,000 kilometres, which is well into where over 700 satellites are stationed in low Earth orbit (LEO).  These missiles may not be designed with space targets in mind, but as exemplified by the US’ successful deployment of an Aegis ballistic defence system missile against a failed satellite in 2008, ballistic missiles can be repurposed at short notice to target space-based objects.  It is thus evident that true “space weapons” are not even needed in order to pose threats to space-based objects.  Consequently, a simple disarmament solution to protect space-based objects in LEO is unrealistic.

Therefore, as an alternative to the path of demilitarisation, regulated weaponisation of space should be considered.  Space weapons range from directed energy weapons like disruptive radiation and chemical particle beam emitters to more traditional kinetic kill vehicles such as missiles, long rod penetrators, and space mines.  Many of these weapons have Earth to space, space to space, and space to Earth capabilities.

When assessing how well a weapon would accomplish the goal of maintaining peace, it is important to consider not only the technical feasibility of the weapon, but also the weapon’s ability to deter attacks and the expected secondary effects of actual usage of the weapon. Some weapons, such as lasers driven by hydrogen-fluorine or deuterium-fluorine reactions, are unfeasible due to their inability to penetrate Earth’s atmosphere or the large amount of energy needed to power them.  Others, such as long rod penetrators (more commonly referred to as “rods from God”) that are dropped from space through the Earth’s atmosphere, are difficult to steer and too expensive on a large scale.  Some weapons also make inviting targets or fail to make a credible destructive threat, two factors that decrease their deterrence ability. Finally, some weapons create uncertainty due to secondary effects, such as the potential release of radiation into the Earth’s atmosphere or the disproportionate effect on the balance of power (e.g. a single release of space debris in LEO by a less powerful nation puts the powerful states who have deployed the most satellites at risk).  These brief examples illustrate the types of considerations that need to be included when designing the ideal space regime.

The weapon that ultimately appears to be the most suitable for inclusion in a space governance regime with the goal of ensuring peace in space is a microsatellite (10-100 kilograms) space mine that emits directed energy.  These space mines would be placed into co-orbit with targets that can be agreed upon ahead of time by states and can even be defunct or other non-critical satellites.  As for the directed energy, radiation, lasers, and particle beams are options, but radiation would be most appropriate based on current technology. Radiation would pose no threat to terrestrial targets or other satellites and only temporarily interfere with the target satellite’s functioning, thus conveying an appropriate amount of warning and ideally deterring further unnecessary escalation.  The secondary effects of radiation are limited as well, since no debris is created, and the radiation can be adjusted and turned off.

By legitimising these microsatellite space mines and strongly delegitimising other forms of space weapons, a significant amount of anxiety regarding weapons in space could be dissolved.  Furthermore, because microsatellites are relatively cheap, they are within the reach of all spacefaring nations.  To enforce this treaty, a verification regime modelled on the International Atomic Energy Agency, which monitors compliance with international nuclear standards, could be one option.  In short, directed energy microsatellite space mines can sufficiently disrupt a space-based object without necessarily provoking an escalatory response and are significantly cheaper and more feasible than other weapons.

Due to the widespread utility of traditional intermediate and long-range ballistic missiles on Earth, it is impossible to achieve an outright ban of weapons that have an ASAT capability.  On the other hand, it is unwise to leave space unregulated and allow countries to continue developing dedicated ASATs and other space weapons.  China tested an ASAT in 2007 and created thousands of pieces of space debris, but this action went largely unpunished despite the danger caused by the debris and the clear escalatory capability of this weapon.  Therefore, it would be prudent to consider strongly delegitimising the majority of potential space weapons while at the same time legitimising a weapon like a directed energy microsatellite space mine that can feasibly achieve an appropriate amount of deterrence and is not as politically or materially destructive.

Zach Larkin is a first-year MIA student at Hertie. He recently graduated from Georgetown University, where he obtained a Bachelors degree in Science, Technology, and International Affairs. Zach has worked at a think tank and the US embassy in Berlin focusing on security issues and is particularly interested in the future of space exploration and exploitation.