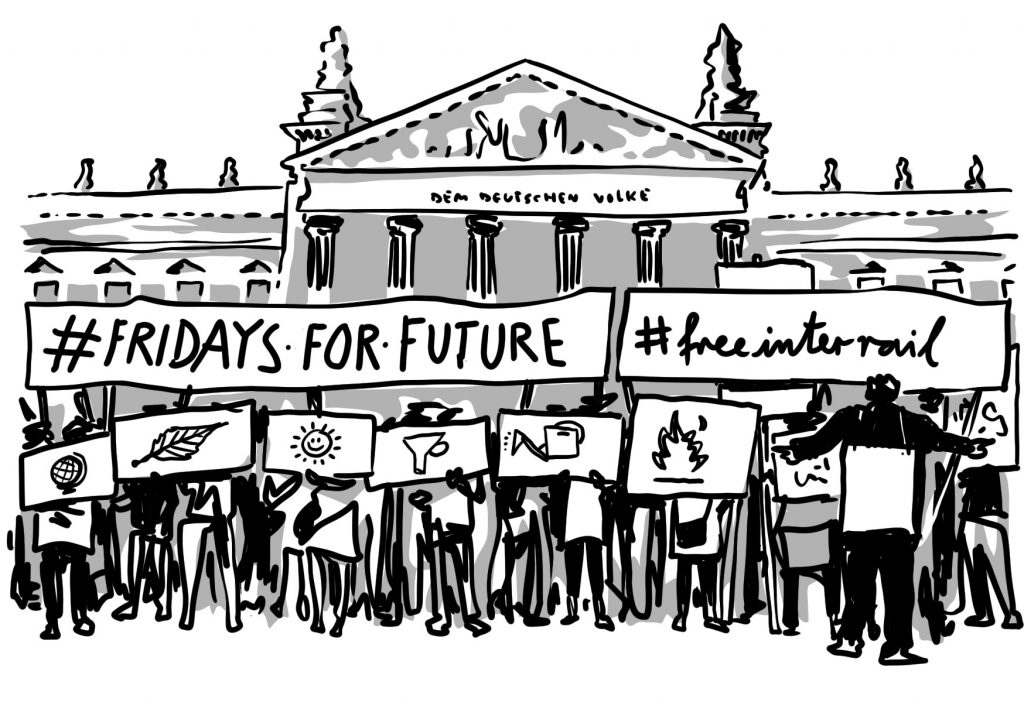 by Julia Gundlach and Fabian Kunkel

With power eroding from the core, more and more citizens are turning to extra-parliamentary practices in order to influence change in a country. Julia Gundlach and Fabian Kunkel outline examples of these practices in Germany, the dangers there within, and how this moment presents an opportunity for young people and their chances for meaningful political engagement

Parliamentarism as a concept for political order and leadership is in crisis. In the United Kingdom, the House of Commons – one of the oldest continuous democratic parliaments in the world – left the existential decision on whether the country should remain in the European Union to a plebiscite. An unprecedented process in a representative democracy. Still, the scandalous politicisation of the decision did not lead Parliament to call for more control over the process. It was the citizen Gina Miller and not the Parliament itself who fought for the House of Commons to have decisional power over the withdrawal application from the European Union. The current tragedy over the ratification of the withdrawal agreement rounds off the picture of a loudly screaming but inexpressive Parliament.

But you do not have to look far across the English Channel to see signs of parliamentary crisis. In Germany, Gerhard Schick (Bündnis 90/Die Grünen) gave up his Bundestag mandate at the beginning of the year to devote himself entirely to his – certainly sensible – initiative “Finanzwende”. He justifies this approach with the fact that he is better able to implement his agenda for regulating the financial markets in his new non-parliamentary role than in his function as a member of the Bundestag. Last year, a number of leading members of the Bundestag joined the new left-wing collection movement “Aufstehen” (Stand Up), which explicitly wants to take effect as a non-parliamentary and supra-parliamentary organization.

These developments are remarkable. So far, political initiatives have always pursued the goal of pushing into parliaments. After all, the power of the state lies in the enactment of laws that are passed from the centre of parliament. When new parties reached parliament, they usually reformed society first from the opposition and then later from the governmental side of the aisle. This was the path of the Greens in the 1980s and has been the goal of the Alternative für Deutschland since their inception in 2013 – at least in the state parliaments. At first glance, therefore, it is surprising that parliamentarians voluntarily switch from parliaments to civil society in order to achieve their goals.

At second glance, this seems quite rational. Legislation and budget law, as the oldest parliamentary forms of law, are increasingly being taken out of the hands of parliamentarians and appropriated by the executive. This becomes particularly clear in Gerhard Schick’s main topic of financial market regulation. Since the financial crisis in 2008, regulations have mainly been made via legal regulations, soft-law directives and increasingly also via European law – all changes that were not primarily determined by the German Parliament. A particularly memorable example remains the politics of the Euro rescue, on which only a small part of the parliamentarians hastily decided. In addition, a large proportion of legislative initiatives do not come from members of parliament or are only pro forma via the government factions. They are mainly written by officials in the ministries.

The increasing disenchantment with politics – the feeling that “nothing will change after all” – therefore has a true core. After all, a legislative executive cannot be voted out of office. At the work level of the ministries there is even the saying: “it doesn’t matter who is minister below us”. The decisive debates are no longer conducted politically, but at most in semi-public hearings with shop-talking “stakeholders”, i.e. representatives of associations, research institutions, non-governmental organizations and specialist authorities. The crisis of the people’s parties can also partly be explained this way. The impression is vanishing that the government factions are significantly determining and enforcing the basic political guidelines. Rather, a small circle of cabinet members and party leaders seems to be setting the federal political course. There no longer seems to be any thought leaders from the middle of the factions without a prominent office, such as Erhard Eppler or the late Heiner Geißler. Voters’ influence on their own constituency representatives as a means of political participation thus appears laborious but without great results. This leads to a loss of power. After all, the voters only directly decide on the members of the Bundestag and not on the cabinet members or heads of the fractions.

For young people, however, this crisis of parliamentarism and the shift of power into the non-parliamentary sphere can also be the chance for more participation in the political process. Young people are anyway staggeringly poorly represented in the Bundestag: Of 709 members of parliament, only 13 or 1.83 percent are younger than 30 years and 127 or just under 18 percent are younger than 40 years. The committee and fraction meetings are almost exclusively baby boomer meetings. Shortening working lives and increasing pension rates have priority in this group of prospective pensioners – one is always most preoccupied with what’s closest to home. This almost guarantees that future issues such as combating climate change and shaping digitalization will not be tackled with the necessary vehemence.

This is why the extra-parliamentary space offers a new opportunity for participation. We are currently seeing on the streets what happens when under-represented young people exercise power outside Parliament. Whether it is for more climate responsibility with #FridaysForFuture or demonstrations against upload filters arising from another copyright law. Young people take the initiative, are heard, and thus have a direct influence on politics – without first having to go through the struggles of political party work. Initiatives are generally more permeable than the parties and often do not have to consider the concerns of members stuck in their ways – everyone pushing in the same direction.

The “Free Interrail” campaign by activists Vincent-Immanuel Herr and Martin Speer shows how a good idea can then also be implemented within political institutions. With a good idea and considerable pressure from the media, they managed to get the European Commission to finance Interrail tickets for 18-year-olds from all over Europe with 700 million euros. In their book #TunWirWas (Let’s get active), Herr and Speer describe what it takes to achieve traction with an initiative.

In the end, the way does not lead past parliaments. And it is high time that the parliamentary democracies overcome their crises. Because the increasing self-confidence of autocracies in this world needs a successful and strong parliamentary counterpart. A parliament can, must and should reflect a wide variety of opinions and all social strata, because through this composition it can develop real innovation power and set the relevant topics on the agenda. We young people should use this weak parliamentary phase as a call for becoming active and using our voices not just for change but for change through more political participation.

Check out the original version published in German here.

Julia Gundlach is a class of 2019 Master of Public Policy student at the Hertie School of Governance and currently also works at the German Research Center for Artificial Intelligence. She holds a B.Sc. in Economics and has gained work experiences at the Federal Ministry for Economic Affairs and Energy, at the European Parliament as well as at the German newspaper DIE ZEIT. She is interested in new digital technologies and issues on European governance.

Fabian Kunkel works as a lawyer in Berlin. He graduated from Bucerius Law School and afterwards clerked at the Federal Ministry of Finance and an international law firm in New York. Fabian is especially interested in the transformation of the financial markets and the economy towards a sustainable model.