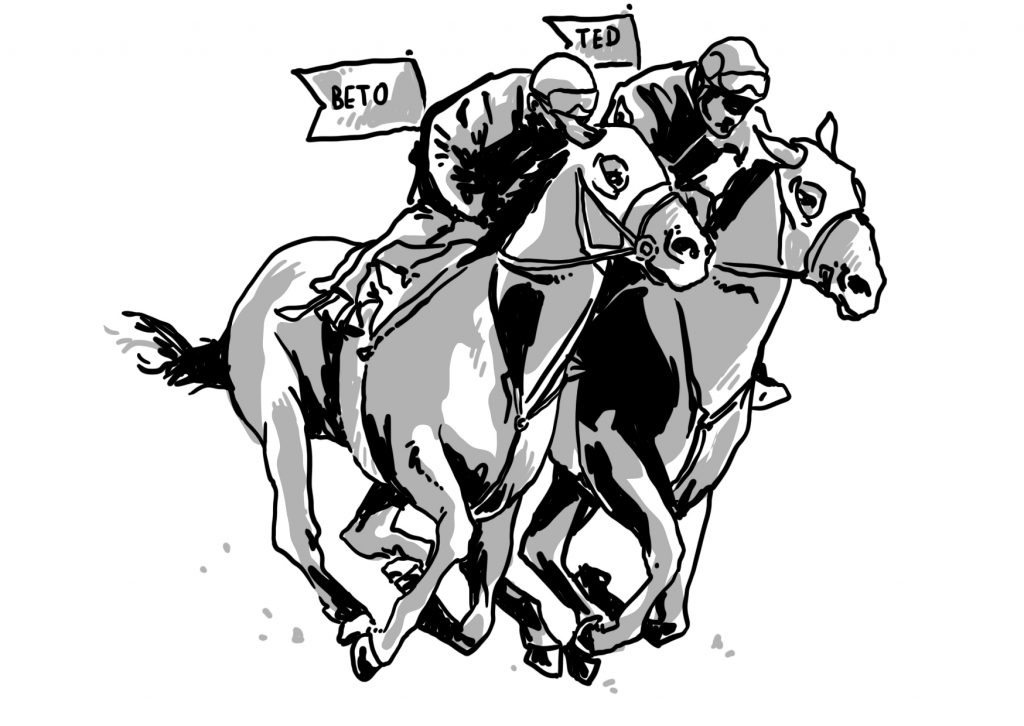 Dreaming of reclaiming Texas, Congressman Beto O’Rourke is running for office in the 2018 Texas Senate elections in hopes of overcoming the twenty year-long Democratic drought in the state. In his campaign against incumbent Republican Senator Ted Cruz, Beto O’Rourke represents a platform of fearless liberalism that seeks to remarkably reshape the political identity of the state. Beto’s vision for Texas’ future comes with: universal healthcare, reformed gun control, immigration policy, and marijuana legalisation.

Entering the final stretch of the midterm election campaigns, the latest polls show that the election of a Democratic Senator in Texas is not just possible, it seems to be within reach for the first time in two decades, with an uphill trend towards success. Whereas the polls in October showed Ted Cruz leading by eight points, now, a few days before the election, Beto O’Rourke has closed the gap and the race is officially dead even.

While Beto (his given name is Robert, but is referred to by his nickname only, pronounced Bet-oh) and Ted Cruz are mobilising the masses to vote, the final days of their campaigns are overshadowed by several mail bombs sent to Trump critics, the Pittsburgh synagogue shooting that stands as one of the most vicious events against the Jewish community in the country’s, and the president sending troops to the Mexican border to stop the migrant caravan from Honduras from entering the US.

Donald Trump’s ascension to the U.S. Presidency has fundamentally polarised American society. He currently governs a nation with a Republican majority in the House of Representatives, Senate and a conservative-leaning Supreme Court. On November 6th, thirty-five of the one hundred senators, the entire the House of Representatives and thirty-six governorships are up for election. The midterm election campaigns have become a verdict on Trump’s presidency. Many consider this particular election as the election of their lifetime – a sentiment that is not typically associated with midterm elections.  Early voter turnout among eighteen to twenty-nine year-olds has increased by nearly five times when compared to the 2014 election, and 1.6 million more registered voters could play in Beto’s favour.

The 2018 midterm elections are on track to set a new fundraising record, mostly to the benefit of Beto, who raised more than $69 million, more than any other senatorial candidate in this election. This is even more impressive when considering that Beto has refused to take donations from big corporations and instead is relying on individual donors.

Texas, a traditionally red state albeit with blue pockets, could undergo a fundamental change and with it, the very notion of American identity in the Trump era could be challenged. The race is amongst the most-watched races in the midterm elections. Texas has the second largest population in the country, which is expected to double by 2050. Four of the eleven largest cities in the US are found in Texas. The outcome of the midterm elections will not only reflect the political climate of the state of Texas, but will test President Trump’s brand of American politics. It may be the indicator of a post-Trump era starting in 2020, or if the state remains red – an affirmation of Republican power.

It is the clash of two Americas. While there is a rising trend of white nationalism in Texas, and 54% of Texan voters agree that undocumented migrants currently living in the US should immediately be deported, Beto wants to tell another story. When President Trump warns of an “invasion of criminal migrants approaching the US” and sends thousands of troops to the US Mexican border, Beto is determined to drive home another narrative that Texans do not need more military at their border, but should reconsider the legally-contested separation of migrant families and federal immigration law. Through ending the federal prohibition on marijuana, Beto wants to change the county jail system in America, that imprisons more of its own citizens than any other country in the world – with a disproportionate amount of African Americans and Latinos experiencing incarceration. “The war on drugs has become a war on people” according to Beto. He is advocating for gun control, during a time when Texas under Senator Cruz legalised open carry of swords in September 2017.

Meanwhile, Cruz is repeating the story that Republicans have told for decades. According to him, Texan identity goes as follows: “Texas is America on steroids.” “The ethos of our state is, ‘give me a horse and a gun and an open plain and we can conquer the world” Is this still the Texan reality of 2018?

Despite his romanticised attempts to harken back to a time of cowboys roaming unencumbered across the plains, this is not the reality for most Texans. In the land of the free, nothing is available for free, especially healthcare. For middle and lower income Americans, access to primary and mental healthcare is nearly unaffordable with proper healthcare reserved almost exclusively for the wealthy. Abortion, despite being made legal in the 1973 Supreme Court Case Roe v. Wade, is under constant attack by conservative politicians who have succeeded in restricting access to abortion procedures in many states. Women of colour are amongst the minorities that suffer the most from this lack of access. However, rumour has it that Texan demographics are changing, and it with it the cultural values attached. Seventy-five percent of Texans live in the densely populated cities of Houston, Dallas, San Antonio and Austin. The remaining twenty-five percent live in areas that have not necessarily benefitted from Republicans being in power. High illiteracy, unemployment, crime rates, lack of education and healthcare access are ever present – and have taken their societal toll. With the largest Muslim population of the US, Texas is more culturally diverse than Ted Cruz would wish for. Beto wants to reflect that, and together with the Republican notion of what politics ought to be, this leads to the core of what he wants to change.

Beto has crafted a narrative around hope, or hope over fear as an alternative to what Trump’s presidency stands for. Beto is not only trying to give Democrats reasons for hope, he is “not running against anything or any political party” but “for each other and this country that he loves so much”, as he lays out when talking about his plan for Texas’ future. “It is not just hope, and it is not just the inspiration. It is the fact that we are turning this into action” Beto goes, 54 hours before the polls close at a neighbourhood park in Austin – “all that matters is that we are in this together now”. Beto’s message is crafted to speak to every Texan, which includes the Hispanic, African American and Asian communities. When he speaks in public, and he does so in both English and Spanish, Beto wants to reach these communities, communities that have in part been largely excluded from politics for decades. Beto emphatically expressed during a campaign speech, that he wants “Texas to be the example, to be the bridge over the small stuff, the partisanship, the bickering, the pettiness, the meanness, the name-calling, the bigotry, the racism, the hatred, the anxiety, and the paranoia that dominates so much of the national conversation today”. According to Beto, it is about time for Texas set an example for the entire country.

Beto’s story and optimist rhetoric fit into the narrative, in the country of narratives. After having been on the road for the past twenty-one months, he has visited all of Texas’ 254 counties (including the Republican bastions); he is popular because he is visible, visible for non-voters, visible for both Democrats and Republicans. That is important in a state with one of the lowest voter turnouts in the entire country. “He would not vote for a party that never showed up in his town, either”, Beto goes. The strategy is to appear everywhere, all the time: That means almost ten stops per day for the last two weeks of his campaign. His visibility has almost no limits, anyone can follow Beto in his well-known Toyota Tundra in between stops via livestream. By inviting the public into many moments in his life, he consistently maintains an authentic persona. Beto allows people to take pictures with him, he finds himself constantly surrounded by his supporters. Meanwhile, volunteers organise block walks, have knocked on one million doors throughout the state, and made 8.7 million phone calls since October 2018. Undeniably, Beto has mobilised the masses: thousands of rallies in small towns and the largest political rally for a single candidate since the 2016 election with a rough turnout of 55.000 people in Austin. The support of the country legend Willie Nelson, who is “to Texas as ABBA is to Sweden”, and a Houston rally together with popular artists such as Bun B, Shakey Graves and Win Butler of Arcade Fire goes to show how much he speaks to the mind of many. Even if Beto loses this particular race, the impact he has already had on the rebuilding of identity of the Democratic party, US culture and politics is immense.

Is this the “purple flying unicorn created by the media”, as Ted Cruz describes the supporters of his opponent? Cruz, 47, being only two years older than Beto, is often perceived as a fossil in comparison to Beto. Even Republicans refer to Ted Cruz as “Lucifer in the flesh”. His efforts to cast negative light on Beto have backfired. The message of the Republicans goes as follows: do not vote for this hip, young candidate, that is skating in a Whataburger parking lot and is a former punk rock musician. A strategy that is not necessarily fruitful, especially amongst young voters. Instead, Beto passes the authenticity test with distinction.

How radical can a candidate advocating for universal healthcare and reformed migration policy be? In the eyes of a country where these concepts are touted as lofty ideals only found across the Atlantic he certainly is radical. Though I think even if Beto were running in a European state-wide election in 2018 he would still stand out. Not because of his demands, but because how he tells his story and connects with people. Even if there is nothing new to be found in his values, he may just be a decent human. Or as Beto himself puts it, “it is the thrill of my lifetime. I am ready to win with you.” If Beto wins, Texas’ political identity is going to shift, and with it the implications for Trump’s America.

Will Texas turn blue for Beto? Only time will tell. And although times are tough, Beto is tougher. 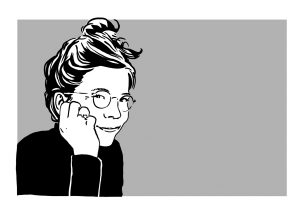 Racien Nowak is a class of 2019 Master of Public Policy candidate now finishing the last semester of her degree at the University of Texas at Austin. She obtained her Bachelors degree in Economics & Governance at Wageningen University & Universitat de Barcelona where she specialised in environmental policy and sustainable banking. Racien has an ongoing research interest in social change, political communication and advocacy.