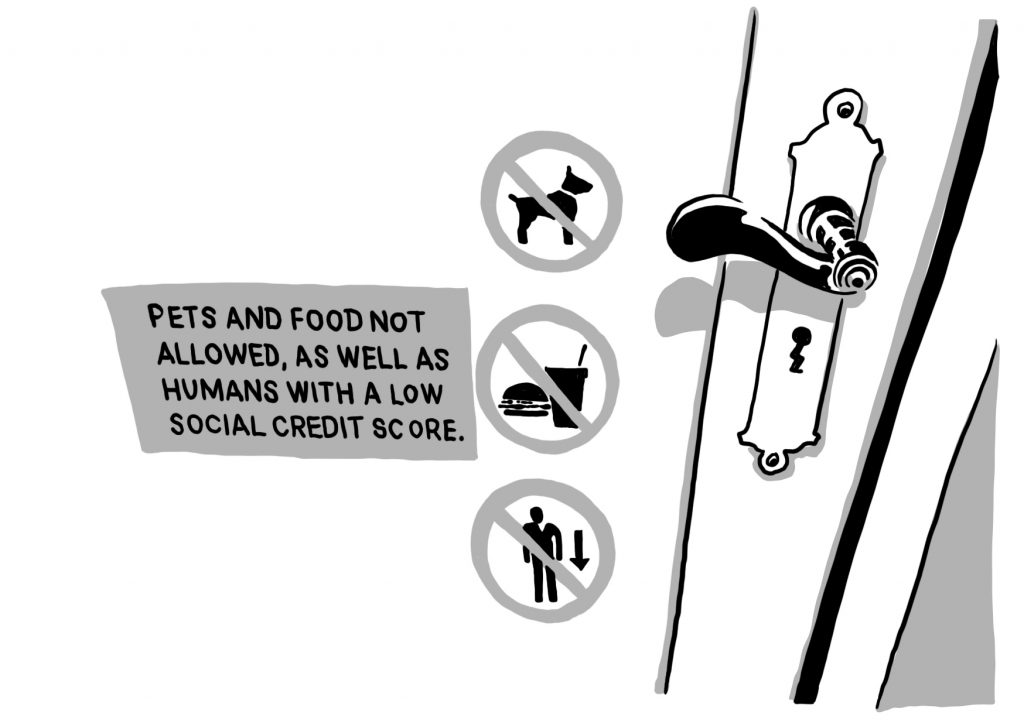 What if the hours you spend playing video games determined your right to travel? What if the comments you post on social media were transformed into an algorithm that conditions your ability to access new housing? Samuel Park weighs upon China’s plans for a Social Credit System (SCS), the hypocrisy of the Western World, and the devastating consequences that this policy could have for the rule of law.

Imagine this: One morning you receive an emailed traffic violation for that red light you sped through on your way to work.  Strangely, in addition to the fine you have been issued, this disciplinary warrant goes on to state other infractions seemingly unrelated to a traffic violation—which the government for some reason has now also made you liable. Your excessive video game habits along with your “outlandishly insubordinate” posts on social media critiquing government policies—including links on the risks of another economic collapse—have determined that you have displayed “inconsiderate behavior towards society.” As a punishment, you have been barred from out of state travel for the entirety of the following year.

A little frightened, you contemplate filing a complaint. You then call your parents to tell them you won’t be able to visit them this weekend.  Soon after, you receive a call from your sister who berates you for ruining plans you made together to go see your parents out of town.  By the end of the conversation she agrees with your argument that this new federal punishment system is indeed excessive.  After she hangs up you receive another alert message with additional penalties for displaying a lack of filial piety due to the canceled visit to your parents as well as a severe warning for disseminating false anti-government propaganda.

You are threatened with jail time.

This disjointed anecdote could be a great example of dystopian fiction if it did not currently serve any semblance to actual policies in the real world. China has unveiled its plans for a Social Credit System (SCS) which is set to be deployed in 2020. Its citizens will be critiqued and rated on not just their financial credit worth, which is a ubiquitous rating system in the west, but additionally, this new ranking will be based on a full spectrum of social and political behavior as well.

Compiling the descriptive metadata of its 1.4 billion citizens, everything from a criminal record to how often certain goods are purchased, how many hours spent playing video games as well as a record of posts and comments on social media platforms to an individual’s entire search history will be logged, evaluated and put through an algorithm.  That score will determine whether or not an individual can be approved for a loan, access new housing, purchase a car, enjoy certain restaurants and may even go as far as determining which schools your children may attend as well as the right to travel at all.  The implications are massive. At first glance, they resemble a dystopian Orwellian meets the Minority Report à la Black Mirror—where every decision you make is monitored and valued by an omniscient power.

Alibaba, China’s leading e-commerce company, boasted more than 580 million monthly customers as of February 2018.  Tencent, the company that now has a stake in almost all online gaming, are also the owners of WeChat – Chinas online messaging and social media platform – which is closing in on 1 billion active monthly users. These two major entities make up the bulk of the user data being mined for the social credit score. Comparatively, if an online shopping platform several times the size of Amazon combined with Facebook and Twitter sent all your data through an algorithm, you would essentially be looking at the equivalent of China’s new system.

So what, if any, is the justification behind this approach? To what extent will China place national security over the privacy of its citizens?

Proponents of the SCS say it will create a sustainable system of trust throughout society – an issue that has become more relevant in recent years.   According to the World Bank, China has lifted over 500 million citizens out of poverty since 1980 and according to their “National New Type Urbanization Plan,” it will move a monumental 100 million of those people into cities by 2020.  One of the results of this mass migration—besides the economic boom and pollution—has been a commensurate level of crime.

According to the College of Humanities and Social Sciences in Beijing, the crime rate increased 411% from 1998 to 2014. Statistics from Beijing Municipal Public Security Bureau show that in 2013 more than 14,000 suspects were arrested for fraud and theft crimes.  Corporate crime has increased as well. The 2014 Global Economic Crime Survey from PwC included over 200 executives from Chinas mainland and eastern coast and showed 42% of respondents reported having been victims of an economic crime or procurement fraud—this is 10% over the global average. These facts suggest that many organizations need to increase their capacity for internal control, and many have stated that the capacity to even detect crimes may be underestimated.

Scandals from forged real estate deals to out of date vaccines and violations of food health regulations have added to the spiraling cynicism toward the government’s ability to maintain stability. Since Chinas economic boom, the potential to be conned has indeed increased, and the fewer people trust each other, the more that Confucian pact the government has with its citizens unravels—citizens giving up the right to vote in the name of social stability. With the knowledge you are being surveyed, some argue that this will encourage citizens to take more responsibility for their everyday living habits to increase their score.

An initial test run for this policy failed miserably in 2010. The pilot version of the SCS was held in Jiangsu province – a densely populated coastal area and currently one of Chinas most advanced technological, educational, and financial provinces. Authorities in Jiangsu started to give out rewards for positive behavior (which one can assume is abiding the law) and negative marks for minor traffic violations—which included blocking or disturbing any government offices, voicing their opinions to higher authorities and even forgetting to visit elderly relatives on a regular basis. The project, which only included voluntary participants, was deemed a failure and at least two state-owned newspapers criticized the system. The Beijing Times stated that it resembled the “good citizen credits” issued by the Japanese during their wartime occupation and human rights activists in China called this a step towards complete totalitarianism.

The SCS would allow the Chinese government to determine the value of a citizen, the same government which has now removed the term limit of its highest ranking leadership to protect and strengthen their authority. Furthermore, this system could enable leaders to choose whichever data points they deem valid, regardless of the context of an individual’s daily life.

Nevertheless, the CCP plans to move forward with the project. Since the release of the blueprint for this system, four provincial-level governments have issued their comprehensive regulations for implementing their own social credit schemes by September of 2017. It is unclear how the system will be designed, it has been argued that the goal could focus more on organizations than on individuals. It is unclear how they will discern or quantify between a citizen or group committing a severe endangerment to society or a minor disturbance. It also remains unclear to what degree certain infractions will prevent an individual from certain rights within sectors of society.

The only certainty is that the world will look on with nervous fascination as this algorithm tries to replace the rule of law with a system never seen before.

Samuel Park graduated with a Masters in Public Policy from American University in Washington D.C. after an exchange semester at the Hertie School of Governance in Berlin. With work experience for a solar energy company, his focus has been renewable energy and the environment as well as emerging technologies.  Samuel currently works and resides in Long Island New York.