New US-sanctions targeting the Nuclear Deal with Iran must not block Iranians’ access to US app stores and social media. Iran’s people are in need of tools to evade government surveillance and censorship, and need social media to engage in public discourse. By endangering Iranians’ internet access, President Trump will be one step further away from achieving any kind of liberalisation in Iran.

On the 8th of May new US Sanctions might very well end any notion of free access to information in Iran. The new sanctions, destined to coerce Iran’s government into a better nuclear deal with the US, could prohibit the US app sellers to do business in Iran and thereby completely block Iranians’ access to the App-Stores of Google and Apple. Should this internet embargo be realised, then Iranians will have no choice other than to surrender to political surveillance and to a flood of uncritical and government-friendly news. At the same time, it is highly questionable whether new sanctions will have the effect that the US-president and his new defence strategists hope for.

In the end, President Trump and his sanctions are targeting a Nuclear deal, that has effectively stopped Iran’s Nuclear Program. By introducing new trade limits, Trump will only prove to Iranians that the US and its promises should not be trusted. This will not lead to a better Nuclear Deal, but instead to new possibilities for the clerical-political establishment to control their people.

In Iran it is already today nearly impossible to receive reliable information. Any information-generating organisation is subject to heavy censorship or even directly in the hands of the government. 20 years ago, there was a flicker of hope, when under reformist president Khatami private newspapers experienced a short boom. But after only two years, conservative circles reinstalled their power; in one night, 25 newspapers were shut down and an unidentified attacker shot the minister of Khatami’s cabinet responsible for the newspaper reform. Since then, Iranian independent news sources have had a hard time. Foreign news organisations do not fare much better – with their websites often being blocked through government initiative.

The blockage of certain websites and the surveillance of individual internet traffic pose a serious problem for the Iranian population. It is dangerous to write critical commentary and it often seems impossible to visit certain websites. Yet, the government controls can be circumvented with reliable VPNs or other programmes that surpass its surveilling web. Getting access to such tools and fooling the censors will become far more difficult, should the Trump administration block Iranian access to US-App Stores. It would also limit their ability to build their own weapons against internet control. Although Iranians are highly proficient in technology and programming,  many basic instruments necessary for designing your own apps can almost only be found in US-American app stores. It is also in the interest of President Trump, who wants an Iranian regime change, to shield Iranians from any Iranian ‘fake news’ and give them access to more reliable news sources from around the world. Perhaps ironically so, in Iran, Trump’s nightmare would actually be the media shielding and protecting the political establishment.

However, Iranians are culturally inclined to suspect a hidden agenda behind the action of other, especially foreign, parties. In light of a history of foreign interventions by the US and the UK who launched two coups against Iranian democratic constitutions and governments, there is a deeply embedded distrust in foreign media. Therefore, Social Media is the current instrument of choice for Iranians to stay informed, of whom nearly half (40 Million) are now online. Telegram plays the most prominent role, as it is seen to be a safe haven from government surveillance – several of its so called “channels” have millions of followers. When the government blocked them four months ago during the protests (which were largely organised via these channels), an estimated 15% of Iranian internet users downloaded the Canadian VPN-App Psiphon to circumvent the governmental imposition.

But Social Media faces the same problems in Iran as it does in Germany and the US. Since ascertaining the origin of any given message is near impossible, news received via social media is could be even more unreliable than news issued by the government. When news is issued from a governmental source at least the direction of the bias is known. It is widely assumed, that the Iranian protests this winter didn’t spread to the country’s big cities exactly because of the missing knowledge sharing capabilities. The unavailability of secure information caused wide-spread distrust in the organisers behind the Telegram channel that pushed the manifestations.

The only way out for Iranians is to autonomously develop their online news system. Through the App- and PlayStore, this is possible even in Iran. The two App Stores provide everything a journalist’s heart desires – from messenger apps for privately sharing information over secure systems to fool government surveillance and persecution, to programs for the development of one’s own apps; there is everything a new and possibly independent news platform might require.

Should the US government decide to sanction Iran, it should therefore be careful to allow Apple and Google to sell and publish apps in the country. Additionally, Social Networks like Facebook and messenger apps like WhatsApp must be allowed to do business with Iranian users. Social Media is an important resource for the Iranian public discourse and the App Stores provide Iranians with the possibility to bypass the government’s censorship and independently inform themselves. For Trump, this means that a more lenient sanction regime could potentially lead to stricter consequences for the Iranian government. 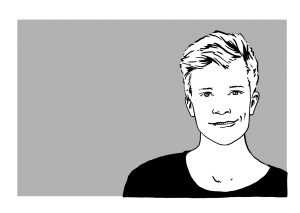 After obtaining a Bachelor in physics, Lukas is now pursuing a Master in International Affairs at the Hertie School of Governance. He is fascinated with Iranian culture, history and politics and glad to entangle this interest with his passion for technology from time to time.