Electrification of transport is widely viewed as a pivotal step in reaching the Paris Agreement goal of limiting warming to 1.5 degrees. In 2014, transport contributed 22% of world emissions and are projected to capture a relatively stable share going forward. For this reason, decarbonising the sector is of utmost importance in fighting climate change. 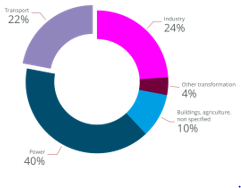 Several countries have realised this and are framing policies to phase out vehicles which run on internal combustion engines. France aims to ban the sale of fossil fuel cars by 2040, a target which the United Kingdom has committed to as well. India has gone a step further, announcing plans to phase out the sales of fossil fuel cars by 2030. China is taking a leadership role in the realm of electric vehicles, as part of the “Made in China” initiative. These policy announcements have also led to significant levels of pressure on countries which have not set such targets. The electrification drive has also been supported by several incentives  including tax credits, rebates and grants in several countries.

This policy push has been accompanied by rapid technological advancements, increasing the feasibility of a rapid transition. Companies such as Tesla continue to push the envelope, while ensuring that the cars match up to fossil fuelled cars in terms of performance and drive quality. Concerns over driving range and charging times are diminishing with the rapid introduction of new technology. Recent studies indicate that improvements in battery costs will make Electric Vehicles cost competitive by 2020. 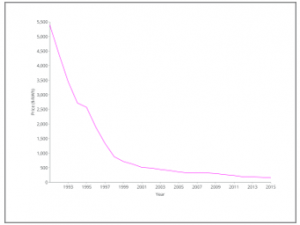 This figure illustrates the reduction in the price (per unit) of the battery packs. This rapid decrease, driven by technological change and policy support might lull us into a false sense of security.

However, the road to electrification is rife with significant potholes.

Recognising that all the progress is a mere preamble to the real challenges which lie ahead is necessary to keep the existing momentum going.

The question I seek to answer here is whether electric vehicles can be more polluting than traditional fossil fuel vehicles.

While both questions are equally important, the second is arguably mildly more surprising than the first. You might be wondering how electric vehicles can be polluting entities when they do not have any direct emissions. However, the picture becomes slightly murkier when you start to question where the electricity is coming from in the first place.

Electricity is conventionally generated in power plants which can run on coal, natural gas and a variety of other fuels. It can also be generated from unconventional (or “renewable”) sources such as hydropower, solar energy and wind energy. Electricity is often dispatched to the end user on the basis of the marginal cost of generation. If it costs less to generate a unit of electricity from a natural gas power plant than a solar power plant, then the energy from the natural gas power plant is dispatched first. This is often termed the merit order of dispatch. Utility companies often estimate the load (demand) and use these forecasts to estimate the power required.

With this background, imagine the effect of plugging in several million electric vehicles. The huge additional load will likely require the use of heavily polluting forms of energy, and these emissions are often much higher than the direct emissions from fossil fuel driven cars. If you plug in your car during non-peak hours, then it is likely that the indirect emissions will be low; however, in an entirely plausible situation, if everyone plugs in the cars to charge in the evening, then they all contribute to a peak load situation and the indirect emissions from their cars are likely to be very high.

That being said, electric vehicles can offer significant benefits by contributing to grid balancing by acting as remote “battery storage and discharge”. When an electric vehicle is plugged in, there is potential for its battery to store energy, but to also dispatch energy when required. This is often termed as vehicle-to-grid technology, which is touted as a potential solution to renewable energy curtailment. However, these benefits are still premised on a decarbonised power sector.

To truly have electric vehicles be emission free, we will require a rapid push towards large scale power generation from non-polluting, renewable sources. Taking into account the pushback from coal lobbies, the vested interests of other fossil fuel lobbies, and the huge scope of the problem, this necessity is the most challenging bottleneck to meeting the goals of the Paris Agreement.

Before this happens, fossil fuel car phaseout targets will remain vacuous promises, electric vehicles – EV should rather be considered as EEV (emissions elsewhere vehicles), and a decarbonised transport sector will remain a pipe dream.