As European governments are increasingly committed to decarbonising their national economies, the question concerning the state of infrastructure is often left unanswered. For Thore Hagemann, however, this is a mistake: countries should complement their low-carbon plans with a transformation of the power system to encourage decentralised power generation.

Over the past two or three decades, the energy sector worldwide has witnessed a dramatic transformation in terms of its input fuels, drastic increases in efficiency and the introduction of renewables to the resources-mix. One thing has not changed much, however: centralised power plants still provide the largest share of electricity in most industrialised countries. At the same time, this centralisation has led to many insufficiencies in the power grid: a large amount of energy is lost during transmission, reliability is not always guaranteed and traditional fuels like coal, nuclear power and gas have fallen into disrepute due to their negative impact on climate.

In essence, conventional centralised electricity generation lacks variability to adjust to challenges posed by recent changes in our modes of energy consumption. In a 2015 report, the International Energy Agency (IEA) underscores this view: “to accommodate high shares of variable renewables, the power system will have to be equipped with the flexibility needed to maintain the reliability of the electricity supply”. An alternative approach to electricity generation that is equipped to meet future demands and developments is available, but underdeveloped in developed economies: distributed energy (or decentralised energy). This article proposes five reasons why this technology is not only relevant to develop new infrastructure in emerging economies, but also to modernise and expand our own energy systems.

1) Centralised utilities are outdated, distributed energy is the future

The idea to produce electricity in large-scale power plants came up in the twentieth century. Originally, electricity was produced by small, combined heat-and-power-plants (CHP) in urban areas. As electricity demand increased, it was cheaper to centrally produce electricity in remote areas while investing in transmission and distribution networks (‘grid’), to deliver electricity to households and consumers, despite the high losses in energy due to transformation and transmission, not to mention inefficient electricity use on the consumer end that lead to heat loss.

Notwithstanding, centralised electricity production remained a profitable system for decades–until the late 20th century. Grid maintenance and construction became expensive and most power failures originated in the grid. Transmission and distribution today constitute a serious cost factor in the formula for the provision of electricity. On top of that, fossil fuels are a scarce resource. The traditional model of centralised electricity generation thus becomes more and more difficult to justify. In contrast stands the concept of distributed energy that comes in several forms: city-scale CHP plants or micro, and off-grid generators for individual households, which produce electricity where it is consumed. While large grids produce failures and inefficiencies, decentralised energy and smaller grids appear to be a more reliable and cheaper alternative.

Today’s electricity generating utilities are inefficient for the most part. Although the coal industry is promising ever-higher efficiency rates, today’s coal utilities average from 38 to 45 per cent. The latest and most efficient plants are not being deployed quickly enough to replace the old inefficient ones. This statement rings especially true in the European context, where electricity generation is a dirty business. In Germany, 40 per cent of the generated electricity was produced from coal, one of the most polluting resources on the market. In addition, consider the enormous loss of energy: 62 to 55 per cent of the energy is simply vented in the form of heat.

Electricity generated from decentralised smaller utilities is far more efficient, especially when the waste-heat is being re-used. Cogeneration facilities, which purposely produce both electricity and heat, are already used in some instances and can recover approximately 80 per cent of the input energy by using the heat that results from electricity production. This has been a known process for centuries, but needs further technological enhancements and political support in order to become a popular means of electricity production again.

Traditionally, centralised electricity generation has always been connected to an entire industry of fossil fuel extraction and utility manufacturing, thus resulting in highly interdependent sectors, which make the energy sector an inflexible conglomerate of corporate and unionist interests. Especially larger infrastructure projects, such as a new coal or nuclear power plant, can require up to 3500 workers at the peak of the construction period (between 400 and 700 throughout the year) and represent an important share of the local economy. This in part explains why not only utilities companies, but also the workers they employ and those indirectly benefitting from this economic activity, actively lobby their governments to support the fossil fuel industry and the installation of massive centralised utilities.

However, the trust in central electricity generation is built on misleading premises: in the long run, coal or oil cannot play an important role in electricity generation due to its scarcity and high environmental costs. Saving jobs in an old industry and investing in yesterday’s technology divests investments into future technologies and much more flexible solutions to energy production. Whereas massive power plants have to remain on-grid for most of their lifetime, distributed power generators can be used more flexibly and provide electricity when and where it is needed–if circumstances change, decentralised utilities offer much greater flexibility to adapt. This comes at great benefits for the overall resilience of the grid: a study found that distributed generation systems are able to “provide power to critical facilities during times of large-scale power disruptions and outages”.

4) A decentralised grid-architecture for an environmentally friendly electricity system

In order to combat climate change effectively, the IEA promotes the use of renewable energies for electricity production as one important solution. Next to being just as reliable, renewables have two advantages in comparison to traditional fossil fuels: they are flexible and variable in use. As centralised fossil fuel utilities and nuclear plants start to phase out, they will make room for sustainable resources like solar power, wind and biofuels (and gas as a transition resource). Although both wind and solar are used for centralised power generation (e.g., offshore wind or solar farms), they have great potential to be employed as distributed source across any country. An intelligent grid architecture of combined and interconnected micro, mini and medium-sized grid structures allows the coexistence of many different electricity generating utilities. Looking ahead a few years, as old power plants become obsolete, this system would enable electricity generation to fall back into the hands of consumers, who also become producers (or prosumers).

5) Distributed energy is worth it!

To recap, distributed energy is more efficient than centralised generation and provides the appropriate architecture for the change to renewable energy supplies in the future. If that does not sound convincing enough, consider one last detail: decentralised electricity production is economically feasible and might even save us money! In making a case for distributed generation, a study predicts that the process would “save the world $5 trillion in capital investment while reducing power costs by 40 per cent and cutting greenhouse gas emissions in half”. Moreover, consider the economic value of shorter lead times, transportability, and low or no fuel-price volatility coupled with the benefits of lower grid costs and losses, better fault management and reactive support. Economically speaking, there is no reason not to invest into decentralised means of generating electricity.

The message is clear. Centralised electricity production is technology of the past. Policy-making in the energy sector should take this into account and make an informed choice for a more efficient, more reliable, cleaner and economically efficient future of electricity. Consumers and the environment will appreciate it. 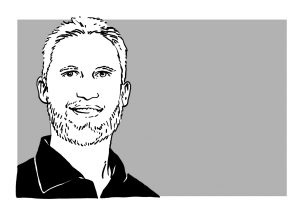 Thore Hagemann is a graduate of the Liberal Arts and Sciences Program at University College Maastricht (UCM) and an MPP Class of 2018 candidate at Hertie. He is interested in questions pertaining to both energy and climate and integration policy. Thore has been working as a trainer for education in sustainable development and has had previous experience working with NGOs and think-tanks in the field of migration. In case academia or politics does not work out for him, becoming famous rapper/DJ/producer is still up his sleeves.