A few months ago, it looked likely that America would elect its first female President, and there was a possibility that the United Nations would be headed by a woman for the first time. This gave us hope, but also showed us that the road to accepting women as powerful leaders is still a long one. Those ceilings in the top ranks remain to be cracked, but what worries Hertie School alumnus Katri Bertram more is how many women are still unable to climb the career ladder in the first place.

In wealthier countries such as Germany, many women struggle in the workforce. Despite that fact that girls tend to perform better in school, women make up more than half of university students, and young women are just as successful in getting entry level positions as men.

We have had decades of debates on cracking the ceiling, breaking up boys’ clubs, and ensuring that women are empowered and valued equally in society and at work. Nevertheless, women start dropping off the career ladder in all sectors: There are very few female professors, few female senior doctors, few corporate CEOs, and few women at the top of politics. A major factor appears to be that building a career and raising children is still a vast challenge for many women.

There are a number of exceptions of working mothers in leadership positions in Germany, but those tend to be women with financial means to ensure reliable, full-time childcare. For most, this is not financially viable. Women tend to downgrade into part-time jobs, and without the support of employers, part-time jobs often do not entail leadership perspectives. There are exceptions, but the reality of most German jobs is that competition is tough. If you are not there at that decision-making meeting at 5.30pm, someone else will be – and frequently that will be a man, or a woman without children.

In 2014, I founded a project with the support of the Hertie Foundation, “KarriereFamilie”, to showcase parents who are managing a career and raising children. The usual examples in the media of Ursula von der Leyen (German Defence Minister, mother of seven children) or a number of CEOs, seemed like superhumans to me. I wanted to profile both mothers and fathers who have successful, fulfilling careers. I initially also wanted companies to speak about barriers facing working parents, but none were willing to go public.

The five key findings of my project on having a career and raising children were as follows:

As a mother of four children who works at an NGO, I personally face many of the challenges above. Financially, it doesn’t all make sense. I’m constantly tired. And I admit that I often dream about trading my life with those who stroll with their buggies in the sun, sipping their coffees-to-go, or those who can sleep through an entire weekend after an exhausting week of work. But I love my job, and hope that I am contributing and giving back to society with all the hours and effort I put into it. And I love my children, who keep me grounded and remind me of life’s priorities.

The motivation behind my project “KarriereFamilie” was to crack the ceiling for working parents. Many of the challenges that parents face in having a career are structural or financial. But an even greater challenge in my experience has been that women have become too scared to try. We can wait a hundred years for “the system” to change — or we can start seeing ourselves as part of the system, a small cog in the wheel that inspires others to try too, and makes change happen. Without some “doing”, we won’t hear much “cracking”. 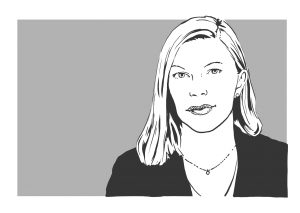 Katri Bertram is Head of Advocacy and Policy at Save the Children Germany, and co-chair of Save the Children’s Global Policy, Advocacy and Campaign Group. She holds Masters Degrees from the London School of Economics and Political Science (International Relations) and the Hertie School of Governance (Public Policy). The views expressed in this article are Katri’s personal views and not those of her employer.