“The world is run by ones and zeros…There’s a war out there…It’s about who controls the information.” This line from the 1992 movie Sneakers inspired Mike McConnell, director of the National Security Agency (NSA) at the time, to speed up the transformation of his agency for the digital age. In “Dark Territory: The Secret History of Cyber War”, Fred Kaplan, Slate’s national security columnist and Pulitzer Prize-winning journalist, sets out to shed some much-needed light on the shadowy history of cyber war and cyber espionage. He traces the tensions, setbacks and presidential panics that helped the NSA become the technical behemoth exposed to the world by the Snowden leaks in 2013. Through a series of personal accounts, the book provides a highly-readable, fact-filled backgrounder on a policy field where too many people are still in the dark.

Although all things ‘cyber’ entered the public consciousness only recently, the field has a prior history dating back half a century. Kaplan takes us all the way back to 1967, before the launch of ARPANET, the precursor to the internet, when electrical engineer and computer pioneer Willis Ware issued the first warning about the inherent vulnerabilities of computers connected in a network. In telling the history of American cyber security policy, Kaplan takes the reader on a gripping behind-the-headlines journey and weaves together tales of government leaders struggling to stay ahead of ‘our adversaries’ in the ever more complex information age.

One of the recurring themes in Kaplan’s narrative is the struggle to define the division of labor within the intelligence community, especially between the NSA and the CIA. In the old days, the NSA was tasked with intercepting information that was moving while the CIA stole it if it sat still. As the world moved into the digital age, this line was becoming blurred and there was no clear answer to the question presidents kept asking: “Who’s in charge?” In the book, Kaplan focuses mainly on the NSA and documents how Fort Meade transitioned from using analog receivers to pull radio waves from the air to novel technologies that tap directly into the fiber-optic cables and gateway points that form the backbone of the internet. While CIA’s activities in the cyber domain receive far less attention, Kaplan does present examples of successful joint operations. In the run-up to NATO’s campaign in the Balkans, for instance, devices planted in the Serbian phone company’s central switching station by the CIA’s Information Operations Center allowed the NSA’s foreign Signal Intelligence (SIGINT) team and a secret Pentagon information warfare unit to intercept and jam communications and to imitate the Serbian air-defense command.

Although offensive cyber operations like the Serbian operation or the Stuxnet worm deployed against Iran’s nuclear sector tend to make for more thrilling stories (and provide better material for movies), Kaplan persuasively makes the case that information warfare is a two-way street. Due to its high level of technological sophistication and interconnectedness, the U.S. is also particularly vulnerable. “If America, or U.S. Cyber Command, wanted to wage cyber war,” he writes, “it would do so from inside a glass house.” The creation the elite hackers group within NSA, known as Tailored Access Operations (TAO), blurs the line between offensive and defensive operations and pushes the boundaries of traditional intelligence work. Although Kaplan mentions that keeping known backdoors (especially the highly-valued “zero-day” exploits) open in order to exploit vulnerabilities in adversaries’ computer systems, he dismisses too lightly the risk that this also leaves American companies and citizens open to the same attacks.

This is not to say that Kaplan cavalierly ignores concerns by those outside the intelligence community. Overall, he provides a vivid and largely balanced account of the long struggle waged by security experts, regulators, generals, private-sector CEOs, and privacy advocates to find an acceptable resolution to the tensions between national security and liberty and privacy. Is it true, as former Director of National Intelligence Mike McConnell argues in the book, that to find a needle in a haystack, you need access to “the whole haystack” in the first place? Should the government be allowed to require companies to install “back doors” in their software to make it easier to break into adversaries’ networks and personal devices? Kaplan narrates these contentious debates in a level-headed manner and refrains from being an apologist for one side or the other. Unlike other authors that enjoy the same kind of privileged access to the inner circles of the U.S. government, Kaplan steers clear of outright condemnation of Snowden’s actions or the mass surveillance programs that he revealed. But the selection of people Kaplan interviewed also left many important questions unasked – for example, why Snowden felt compelled to do what he did or whether the billions of taxpayer dollars that were spent on NSA’s secret programs actually paid off.  These are omitted by a Washington, D.C.-centric narrative.

For some, the Snowden revelations proved that the NSA had morphed into the ultimate rogue intelligence agency. Dark Territory paints a far more complex picture and explores the human motivations, blunders and successes of an agency that was primarily trying to protect the country and – like the rest of world – scrambling to keep up with the rapid technological changes and a shifting global threat landscape. This was complicated by the fact that presidents and many generals of the old guard were for the longest time either uninterested in cyber issues or simply did not understand the intricacies of the brave new borderless cyber world.

Kaplan’s approach of telling this history through stories humanizes the often anonymous government bureaucracies and lends the book an engaging narrative flow. But as Kaplan jumps back and forth in time to relay a dizzying array of anecdotes, the reader is sometimes left overwhelmed with the carousel of characters and lengthy biographical asides. Moreover, instead of deeper technical discussion on what works and what doesn’t, many pages are filled with commission after commission issuing one report after the other – seemingly to imply that a problem has been widely recognized, but we do not know how to fix it.

In sum, Dark Territory is an accessible and impressively researched book (with 30 pages of endnotes for the curious reader), for which the author conducted more than one hundred interviews. It is also highly relevant. A spate of recent cyber attacks on the United States, including the suspected Russian hacking of the Democratic National Committee’s servers and the distributed denial of service (DDoS) attack, have made it clear that we need to have informed public discussion about the security and privacy challenges we face in the information age. When former Defense Secretary Robert Gates pondered the fundamental questions surrounding the cyber realm, he liked to say “we’re wandering in dark territory.” Although Dark Territory: The Secret History of Cyber War is only one light source in a policy field that remains dim, understanding how we got to where we are today can help us think about where we should be headed in the future. The balanced and informative history told through many personal stories make Kaplan’s book a highly engaging and worthwhile read for anyone who would like to get up to speed on a topic that will only grow more important with time. 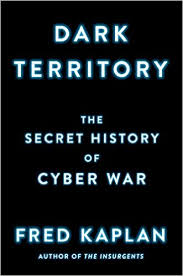 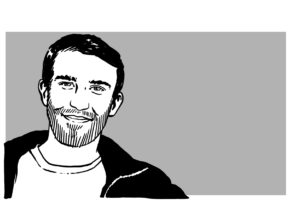 Christopher Newman is a class of 2017 Master of Public Policy student at the Hertie School of Governance and currently studying abroad at the LBJ School of Public Affairs at the University of Texas at Austin. He is a graduate of University College Maastricht in the Netherlands, where he focused on transatlantic affairs and security studies. He previously worked for the Alexander von Humboldt Institute for Internet and Society and is interested in how new technologies are reshaping all aspects of our lives.