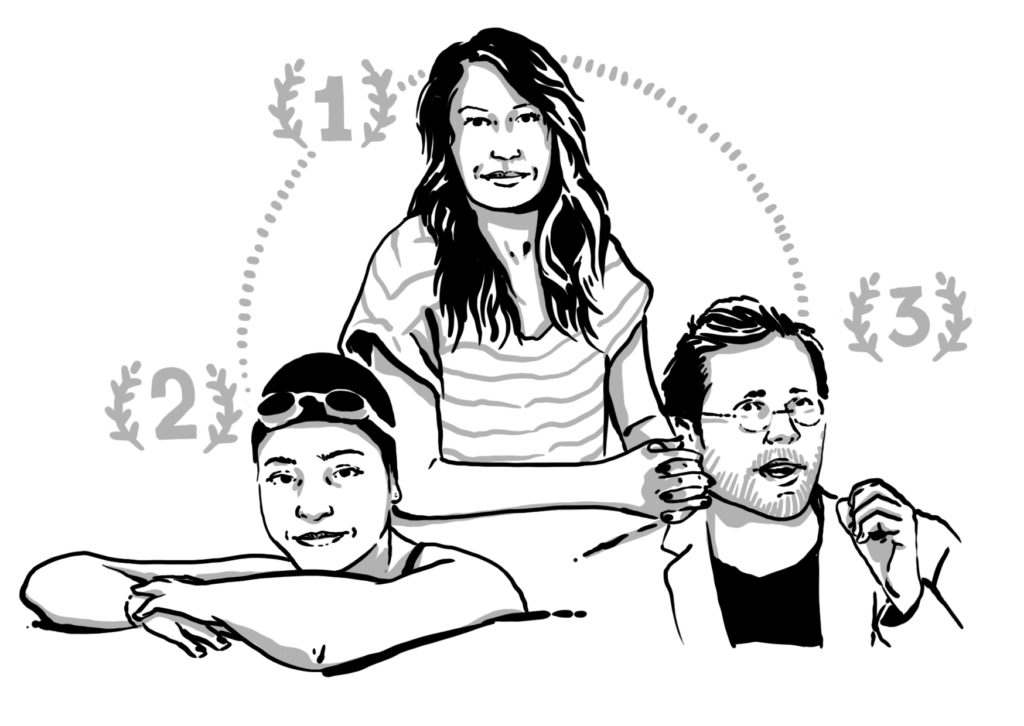 Once again, Hertie School students were also asked to elect the “Person of the Year” in a school-wide online vote, which was organized by the online student magazine The Governance Post. Their choice: Canan Cokun, a journalist for Turkish daily newspaper Cumhuriyet, whose investigation into alleged corruption by Turkish judicial officials has her facing 23 years in prison.

Governance Post editors wrote the Handelsblatt laudations for their people of the year, which also includes short laudations for their second and third choices, Yusra Mardini and Jan Albrecht (respectively). Mardini is an 18-year-old Syrian refugee and Olympic swimmer who saved lives in the Mediterranean Sea and competed in the Rio 2016 Olympics.  Albrecht, who is 33, is one of the youngest representatives in the European Parliament and its rapporteur on the EU’s General Data Protection Regulation as well as on the EU-US data protection framework agreement.

Respect is a very tricky thing. Do I have to earn it, or is it simply due to me? And what does it entail – that people be polite to me, or more than that?

For some Turkish officials, the answer is simple: they deserve respect – and in no small measure – because of their rank. For them, respect means that their decisions, their way of life, and even they themselves ought to be protected from scrutiny. To shine a light on their behaviour, let alone criticise it, is out of the question, at least from those “beneath” them. In fact, their stance is supported by Article 125 of the Turkish Criminal Code, which sets out hefty custodial sentences for the broadly-defined offence of “insulting a public official”.  For such people, respect is a one-way street.

For Canan Coskun (29), a journalist and court reporter from Cumhuriyet, a daily newspaper which takes a critical view of government actions, things aren’t so simple. In her opinion, high-ranking officials in Turkey’s justice system, President Erdo?an‘s son and other members of the Turkish elite cannot be protected from scrutiny of their unethical actions simply because of status.

Coskun grew up in Istanbul. At Cumhuriyet, she learned journalism on the job; alongside her work, she enrolled as a photography student at Anadolu University in Eskisehir. She has been writing about corruption in the Turkish legal system for years. In so doing, she behaves with a lack of “respect” that must be simply intolerable for several of its members.

In 2015, her daring behaviour came to a head. She reported that several judges and prosecutors had bought luxury apartments, significantly below market prices, from the Turkish public real estate authority. Her coverage (but not the story itself) sparked outrage; a few months after the report, Coskun was formally charged with insulting the dignity and reputation of the officials named in her report. Her trial started more than a year ago and the court’s judgment is expected to be announced on 26 January 2017. A guilty verdict could mean a prison sentence of up to 23 years and four months. However, none of this has silenced Coskun: she continues to comment on Turkey’s political events via Twitter.

Sadly, there are many cases like Coskun’s. Erdogan’s government, having declared a state of emergency after the attempted military coup in July, has been heavily cracking down on the media. Countless newspapers have been shut down. More than 3000 journalists have had to stop working; many have fled the country. In October, Cumhuriyet’s editor in chief and several other staff members were arrested. The reasons behind many of the government’s accusations are as absurd as in Coskun’s case: Kadri Gürsel, a columnist, poked fun at Erdogan’s dislike of cigarettes – and is now facing terrorism charges. Bit by bit, Turks are being robbed of the opportunity to rely on diverse and independent sources to keep abreast of the actions of their government. Despite all of this, several journalists somehow manage to keep going – at significant personal risk.

But journalists aren’t the only ones affected. Soldiers, police, officials, teachers, scientists and opposition politicians have been arrested or banned from going to work. Potentially, anyone who is suspected of taking a critical stance towards the government could be affected. In April 2016, Selahattin Demirta?, a human rights lawyer and the leader of the pro-Kurdish opposition party HDP, visited Berlin and the Hertie School of Governance to take part in a discussion event with our students. He and other HDP members of parliament have been in custody since November this year. In contemporary Turkey, the State has an easy solution for those who dare to express criticism, or even a mere lack of respect: lock them up.

Since it granted its citizens the right of individual petition to sue the government in the European Court of Human Rights, Turkey has been held to have violated the European Convention on Human Rights more often than any of the other 46 States that signed the treaty. Among these judgments are hundreds of instances in which freedom of expression has not been respected by the State. Unfortunately, the majority of the Strasbourg court’s judgments are usually met with incomprehension at best and, at worst, resistance by the Turkish parliament and government, authorities and even some members of civil society. In this context, the idea of a government acting under law cannot, therefore, be taken as given. The possibility of Turkey’s accession to the EU now seems more remote than ever.

Erdogan‘s AKP government is flirting with the possibility of reintroducing the death penalty and clearly doesn’t view basic democratic values as non-negotiable. To the contrary, they are mere bargaining chips in arguments with the EU, in particular with the European Parliament. All of this has created a climate of fear. If even foreign journalists such as Hatice Kamer, a German, are getting arrested, how can Turkish nationals rely on their constitutional right to freedom of expression?

A lot of courage is needed to voice criticism, both in Turkey and elsewhere. At the Hertie School, we have chosen Canan Coskun as our Person of the Year 2016. With her unwavering courage, she represents all of those who take on great personal risks in the struggle to make their critical voices heard. Given the worrying developments in her home country, her actions remind us never to take our freedoms for granted. In light of Brexit, the prospect of the Trump presidency and countless ongoing conflicts worldwide, Turkey and the rest of the world need more people like Canan Coskun. For this reason, our respect for her is secure. No rank necessary.

What do you do when life throws a series of awful events at you? Either you swim, or you sink. Yusra Mardini decided to swim. Twice.

Mardini, who grew up in Damascus, was eighteen years old in the summer of 2015 when the civil war forced her and her sister to flee Syria. Their route took them to Turkey, where a dinghy was to take them across the Aegean sea to Europe. When it dawned on her that their boat, just like many refugee boats that had come before it, was in danger of sinking, Mardini decided to do what she does best. She swam. Together with her sister and two other passengers, she pulled the boat for over three hours until they reached the coast of Lesbos, saving not only her own life, but those of eighteen others too.

In 2016, Mardini swam again, this time not to save her life, but as a member of the Refugee Olympic Athletes Team in Rio de Janeiro. She has shown just how strong her will to live is. Swimming and fighting instead of giving up – an approach that saved her and which deserves our admiration.

Jan Philipp Albrecht’s dedication to civil rights and liberties in the digital age has helped to attract the attention of many young people. As the youngest German Member of the European Parliament, spokesman for the Greens and Rapporteur for the EU’s General Data Protection Regulation, he has successfully advocated for stronger data protection standards. In his efforts to enter into a dialogue with European citizens, he comes across as an especially kind and authentic young politician.

Together with his colleagues, he helped to create a “Charter of Digital Rights”, making an invitation to the public to participate in its design. In the documentary Democracy, Albrecht gave the audience an insight into his working environment and the challenges of safeguarding fundamental rights in the digital age. Despite his remarkable accomplishments, he remains in touch with reality and stands by his core message: “Data protection is a basic right. If you want my data, then ask me if I agree to it.”

Lisa Gow is Executive Editor of The Governance Post and a second-year Public Policy student at the Hertie School of Governance.

Johanna Buchholz is an editor at The Governance Post and a first-year Public Policy student at the Hertie School of Governance.

Tanya Shoshan is an editor at The Governance Post and a first-year Public Policy student at the Hertie School of Governance.

This article was published in German in the December 2016 edition of Handelsblatt.