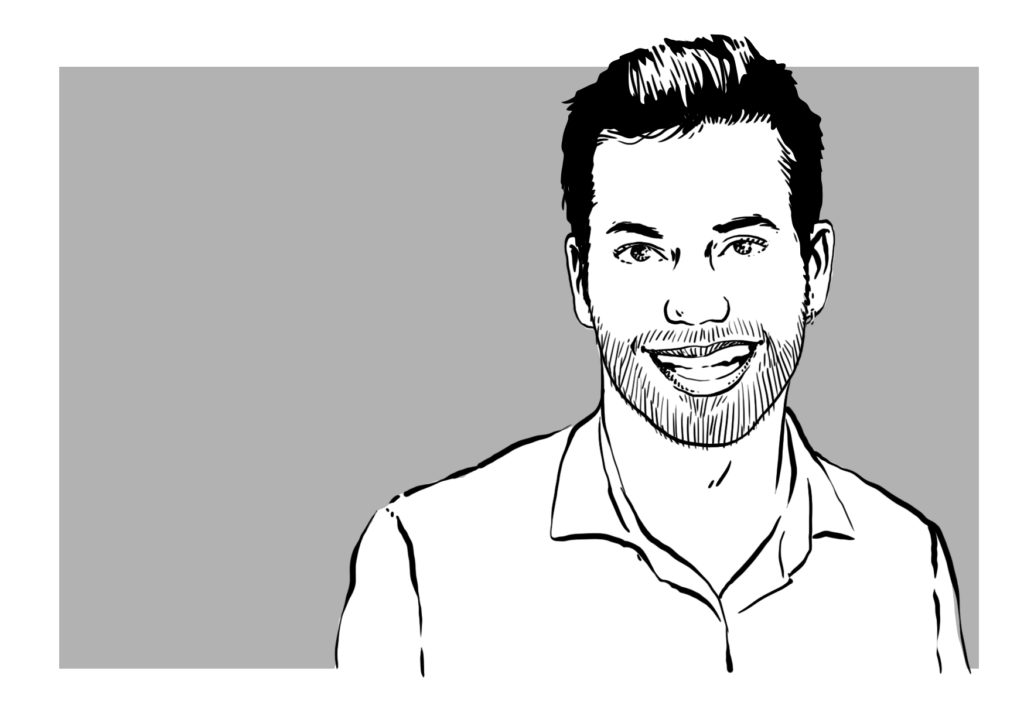 There appears to be a general consensus nowadays that increased infrastructure spending can boost job creation and economic recovery worldwide. McKinsey (2015) calculates that at least $57 trillion will be needed before 2030 in order to build the infrastructure that the global economy needs so badly. Similarly, Standard & Poor’s (2015) emphasizes the “multiplier effect” of an increase in infrastructure spending of 1% of real GDP. In this sense, in a three-year period, while such an increased investment is expected to increment GDP by 1.2% in Germany, the predicted increase would be 1.4% in the Eurozone as a whole (generating 157,000 and 627,000 new jobs, respectively). This “multiplier effect” is even higher in developing countries such as Brazil and China (2.5 and 2.2, respectively).

In line with these recommendations, the German government has launched a 15-year plan to spend a total of €263 billion on roads, railways and waterways. Similarly on the European level, the Juncker Investment Plan has been launched by the European Commission, aiming at mobilizing investments of at least €315 billion in only three years without adding to public debt or straining national budgets any further. Moreover, according to McKinsey (2015), while developed countries such as the United States, United Kingdom and Canada suffer from an infrastructure investment gap of around 1 % of their respective GDPs, developing countries such as Brazil, Mexico, Indonesia and India need nearly an additional 3% of their GDP spent on infrastructure. 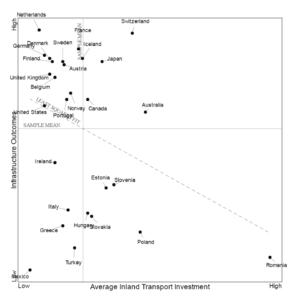 Furthermore, Graph 2 shows how countries rank when comparing their performances on the various infrastructure indices. In the case of the infrastructure outcomes dimension, once scaled by level of investment, the conclusions that can be drawn from the country ranking are in line with those of Graph 1. In this sense, while countries such as the Netherlands, Germany, Denmark, Finland and the United Kingdom are the best performers, others such as Romania, Poland, Turkey, Slovakia and Hungary obtain the lowest scores. With regard to the average performers, countries such as Japan, Ireland and Canada receive the closest scores to the sample mean. 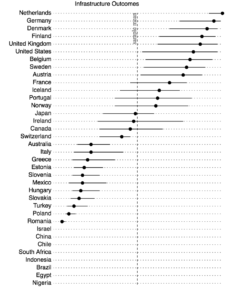 When focusing on Romania, the worst performer on the infrastructure outcomes index, the radial component comparison tool in Graph 3, shows us how it performed on all the underlying components that constitute the outcomes dimension, as well as how its performance compares to another country or country group. Thus, although Romania outperforms the average scorer in terms of infrastructure access, its performance is much worse when it comes to infrastructure quality and project delivery. 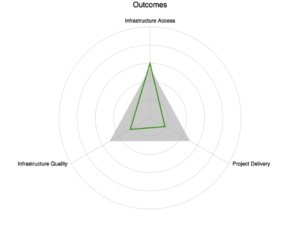 Concerning the aforementioned Hertie School-OECD Global Expert Survey on Public Infrastructure, which contains expert survey data from 36 countries, it gives countries scores ranging from 1 to 5, 5 being the largest extent to which a condition is fulfilled. In the case of the extent to which transparency and accountability are relevant criteria in public infrastructure planning and decision-making in a given country, while the mean for non-OECD countries is 2.5, OECD countries score a mean of 2.8 points in the 1-5 scale. For instance, industrialized nations such as the United States, the United Kingdom, Australia, the Netherlands, Denmark and Finland are the best performers, obtaining scores well beyond 3. In opposition to this, other developed countries such as Germany, France and Japan receive scores lower than 3. On the other hand, with regard to the worst performers, those being Egypt, Mexico, Slovak Republic and Turkey, all of them scoring well below 2. Related to this, The Governance Report 2016 points to the fact that transparency of decision-making processes may be the key element explaining divergent countries’ performances on the infrastructure outcomes dimension. Graph 4 shows the Hertie School – OECD Global Expert Survey results regarding the relevance of transparency and accountability in infrastructure decisions. 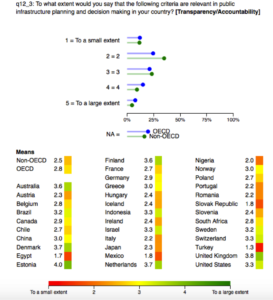 In conclusion, although increased infrastructure spending may be one way to kick off economic growth, there does not appear to be a causal relationship between higher level of infrastructure spending and better infrastructure outcomes such as quality and productivity. Strengthening infrastructure management capacities, and especially transparency mechanisms, seems to be fundamental in order for governments to change this. In times of economic crisis and austerity politics, citizens may not be willing to put up with political leaders whose infrastructure investment decisions do not translate into improved outcomes. 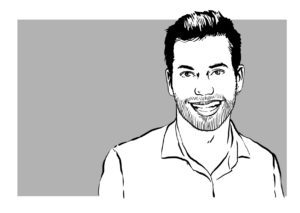 Diego Fernández Fernández is an MPP Graduate from the Hertie School of Governance and currently works as a Research Associate at The Governance Report. Previously, he did a BA in Journalism (USC, Spain) and an MA in International Relations (IBEI, Spain). During his studies at Hertie, he also interned at the GIZ office in Costa Rica. He is passionate about European politics, international development, as well as corruption studies.