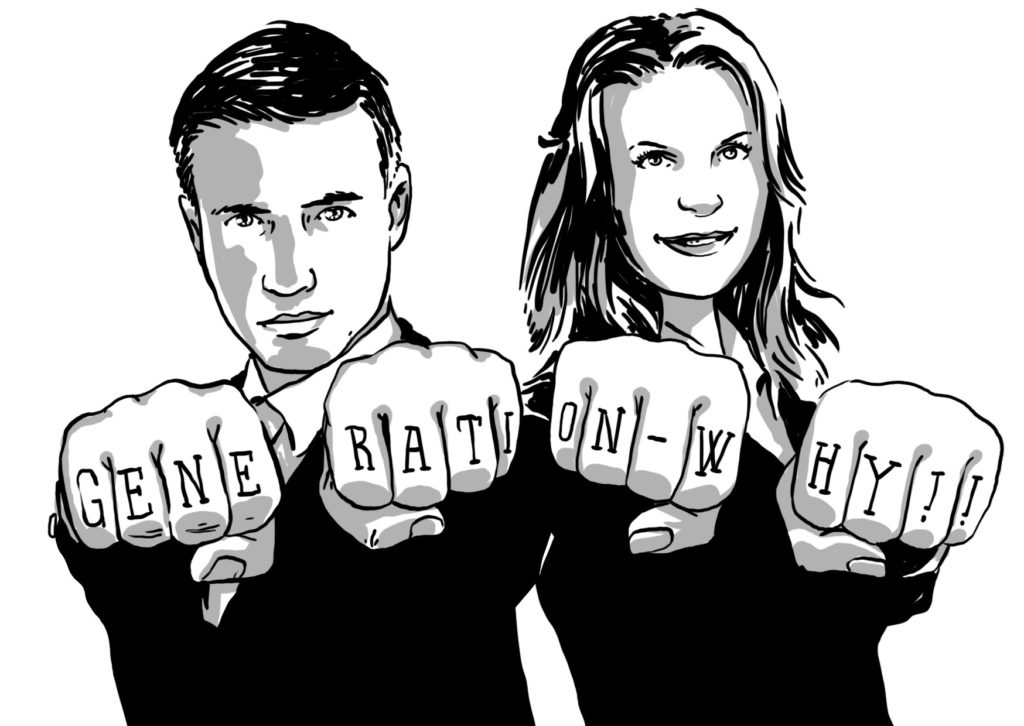 Generation Y is growing up. Young people born between 1985 and 2000 are taking on responsibilities in society, economy, culture and politics. They are seen as crisis-tested, pragmatic and flexible, and they have experienced political tensions, terrorist attacks and global wars. They know how ineffectual policy-makers are, how shaky public life has become, and how uncertain the transition to a professional life can be. Now they are about to invalidate role models that have been in place for generations.

Education, job, marriage, and children – their parents still followed clearly structured, gender-specific patterns. Today, everyone, men and women alike, must make their own biographical decisions. For Gen Y, the question of why, the question of meaning, has become the compass of their lives.

Young women seem more capable of coping with societal changes than men. Even though, according to the new Shell Youth Study, they are more anxious about the future, they come to rather positive conclusions overall and see the future in a more optimistic light. They invest in their education in a well-targeted manner to optimise their professional chances. Young women do clearly better than young men in all areas of education. They develop faster, go to school earlier, have to repeat classes less often, skip lessons less frequently, come to terms with social rules more easily, are better at school, storm universities, and dominate medical and law schools. Young women are awarded more certificates and outperform young men in nearly all school and university exams. They obtain most of the top high-school diplomas – in Germany nearly 55 per cent – and also university degrees in many subjects. The performance of young men, however, has only faintly improved during the past 20 years.

A generations-long gender gap is starting to erode. In education, the gender hierarchy has been turned upside down. This is very exciting from a socio-political point of view. The last international comparative studies on educational outcomes by the Organisation for Economic Co-Operation and Development (OECD) speak for themselves and demonstrate the girls’ educational success. According to the results of its PISA study on scholastic achievement, girls performed better in reading and showed constant improvement in the natural sciences, traditionally a male domain. Boys only outperformed girls in mathematics, but often only moderately. What is striking is that a clear gender gap is also visible when it comes to family orientation. Since the year 2000, the Shell Youth Study has shown that young women in Germany are committed to the traditional female role – with a clear focus on harmony, community and service to the community. However, they are by no means contented only with children, housework and community or church engagement. They have extended their role: Nearly 80% of the 12- to 25-year-old girls and young women not only desire a family but also want to be successful in their jobs and are keen to pursue a career. With this attitude, they are entering traditionally male domains and opening up new, flexible ways to define themselves as women.

This is different for young men: Only 40% agree to deviate from the traditional male role model. The majority are not willing to become actively involved in areas that are traditionally seen as “female” domains. They see such an extension of their role as demeaning and beneath them. So they confine themselves inadvertently to a narrow male role and hinder their own social, cultural and economic development – which in turn has a negative effect on their educational activities.

Does this upheaval of gender relations mean that women also stand up to men in the professional world? This depends on many factors. One important condition is that their human capital is valued. Most of the men in executive positions – in Germany still the overwhelming majority – have difficulties in this respect. Faced with the choice of hiring a female or male manager, many men are still guided by the stereotype that women aren’t tough enough for such positions. In case of doubt, they tend to choose a medium-skilled male candidate with a forceful and edgy bearing rather than a highly qualified woman – regardless of whether her manner is forceful or discreet. They choose what is familiar to them, expecting that a man will fit more easily into the existing system.

According to the study, this also has to do with different attitudes regarding job and career: Men look for safe jobs, a high income and good career opportunities. They believe that overtime and weekend work are inevitably part of the deal if they want to climb the career ladder. In contrast, women focus on the meaning of their own actions and self-realisation in their professional life. For them, it is more important to feel they are achieving something and to have the chance to contribute their own ideas in their professional life. When it comes to the compatibility of children and career, young women look for flexible working hours that can be adapted to their own needs and focus on reliable social structures.

All these things unsettle the power holders in executive positions. Quite often they fear that women’s demands could disrupt the established processes within the company, which makes them hesitant to employ highly qualified young women. A paradoxical situation: Young women are very well educated, crisis-tested, and bring a lot of social capital with them but they cannot translate these strengths into professional success.

There are many reasons for this: Men still dominate the executive levels and play a key role in recruitment decisions. Being a woman is still a career obstacle because the double burden of job and family mainly rests on women. Under pressure from partners and relatives, they still revert to traditional patterns after giving birth to their first child, retire from their jobs and become housewives against their will. Public childcare is still not reliable and flexible enough to allow them to apply for executive positions with a clear conscience. In addition, they still believe they must fulfill all the requirements in a job ad, compared to their male counterparts, who are much less scrupulous about this. Due to their idealistic professional attitude, women still hinder themselves because they do not realise that true career management is only possible if they can exercise the authority of an executive position. These are the reasons why young men with much weaker educations can still snatch attractive positions from under their noses.

But this situation will change. We are now in a transition period. Resistance within management will perhaps hold out another ten years but no longer – also because the shortage of skilled labor is growing and global competition is increasing. Companies need innovative staff, i.e. women, in order to stay competitive on the global market.

More and more young women with excellent qualifications are now aware of their high market value. This will also be reflected in the demand for equal pay. Once they are employed, young women will adapt to professional conditions with the same cleverness and flexibility they brought to their education. They will bring a new mentality to the executive levels and will put great pressure on companies to reconcile family and career. These young women stand for virtually everything that has long been urgently demanded in modern corporate management textbooks.

Klaus Hurrelmann is Professor of Public Health and Education at the Hertie School of Governance. He teaches in the fields of health and education policy.

This article orginally appeared in DIE ZEIT on 25 May 2016.