What if we understand war not as a direct exercise of power but as a way to establish meaning through which power is exercised? Both war and language, as well as other practices like culture or science, can be regarded as forms of communication, ways of representing the world that profoundly affect, regulate or constrain how we human beings live. But they are not the same. Different modes of communication have profoundly different consequences for the organisation of society. In this short essay, I argue that war tends to construct rigid uni-dimensional identities whereas multiple identities are more likely to flourish in more deliberative forms of communication.

Sen argues that uni-dimensional identities are a cause of violence and conflict. Most of us have multiple identities. Sen says he ‘can be, at the same time, an Asian, an Indian citizen, a Bengali with Bangladeshi ancestry, an American or British resident, an econo­mist, a dabbler in philosophy, an author, a Sanskrit­ist, a strong believer in secularism and democracy, a man, a feminist, a heterosexual, a defender of gay and lesbian rights…’ (1996: 19). It is when we come to see one of those identities as overarching, dominant and inevitable that conflict is likely. ‘Many of the conflicts and barbarities in the world are sustained through the illusion of a unique and choice less iden­tity’. (ibid.: xv)

These uni-dimensional identities are not, of course, adopted in isolation. All notions of identity are based on difference; we can only adopt an identity by dis­tinguishing it from and relating it to other identities. A point made by theorists of language is that identity, a sign to describe oneself, is defined through a mutual process of communication. It acquires meaning through the recognition of others. The child identi­fies itself because its mother and father and others use a particular name. Sen quotes Sartres as saying ‘The Jew is a man whom other men look upon as a Jew …it is the anti-Semite who makes the Jew.’ (1996: 7).

It was the German theorist Carl Schmitt who put forward the proposition that the concept of the political that underpins the state is based on the friend-enemy distinction. Schmitt argues that dif­ferent fields of human endeavour are characterised by binary distinctions—good and evil in the case of morality, beautiful and ugly in the case of aesthetics, profitable and unprofitable in the case of economics. Yet is this really the case? Theorists of language sug­gest that words are defined in relation to an infinite variety of other words and also that these words are subject to constantly shifting meaning. So for exam­ple, aesthetics is not just about the beautiful and the ugly, it is also about the striking, the pretty, the light and the dark, the modernist, the classical, the banal, the traditional and so on. Likewise, the political could be about parties, partners, allies, competitors, or adversaries, campaigns, debates, or struggles, and moreover the word ‘politics’ or the ‘political’ is under­stood differently in different times and places and by different people.

So why does Schmitt insist on a binary distinction to define what he means by the political? One answer is to suggest that such distinctions are the consequence of particular types of collaborative practice, specific modes of communication. For Schmitt, the friend-enemy distinction depends on the ‘real physical possibility of killing.’ Evidently if you are threatened with death because of a particular identity, that iden­tity becomes more important than any other. As Sen describes the Hindu-Muslim riots in 1947, people were ‘trapped into that vicious mode of thinking, and the more savage among them …were induced to kill “the enemies who kill us” (as they were respectively defined)’ (1996: 172). In sectarian conflicts, identity is a matter of life and death. Where identity is ascribed by the other, often the only choice is to turn to those who are ready to protect in the name of identity. Vio­lence is an act of communication between the victim and the perpetrator. Whatever the motivation, what is communicated is fear and hatred; violence imposes a narrow binary distinction between victim and perpe­trator that can be framed as ‘friend’ and ‘enemy’. ‘This war was so bloody because we didn’t hate each other’ a Serb colleague once said to me after the war in Bosnia; in other words, violence divided the Bosnian commu­nity into Serbs, Croats and Muslims.

One of the critiques of constructionist accounts of identity is that they fail to account for passion. Anthony Smith, for example, the theorist of national­ism, suggests that constructionists fail to understand the ‘sacred community’ of shared memories and ancestry. An essentialist understanding of identity would argue that identity is deeply embedded in history, culture and tradition. Underlying national identities, says Smith, are pre-existing ethnicities. But why do some identities arouse passion and not others? What about people of mixed identity? Are they excluded from this ‘sacred community’? And why do different ethnic groups sometimes live in harmony for long periods and sometimes not?

“Is not war merely another kind of writing and language for political thoughts? In one word, the art of war, in its highest point of view is policy, but no doubt a policy which fights battles instead of writing notes.” Clausewitz

Of course, the friend-enemy distinction does not come from nowhere –it builds on culture and tradi­tion, which may be reproduced or reinvented in each generation through education, art and literature and language. ‘The “raw materials” from which identity is produced may be inherited from the past but they are also worked on, creatively or positively, reluctantly or bitterly, in the present.’ (Gilroy, 1997: 305). War, in par­ticular, transforms and rigidifies that legacy. Surely the explanation that passion about one’s identity is a consequence of violence –a way to justify killing and to explain the deaths of loved ones- is much more convincing than the essentialist assumption and also explains why ethnic and religious histories are suf­fused with stories of war and battle and sacrifice.

“The hope of harmony in the contemporary world lies to a great extent in a clearer understanding of the pluralities of human identity and in appreciation that they cut across each other and work against a sharp separation along one single line of impenetrable division.” Sen

Schmitt feared that a pacified world would mean the end of politics and the state. But the implication of my argument is that a pacified world would be a much freer world where sovereignty is based on mutual agreement and perpetual discussion rather than on uni-dimensional identities. A collectivity based on the outcome of discussion (a civil society) rather than fear of the enemy is one that permits the flour­ishing of those multiple identities associated with globalisation. 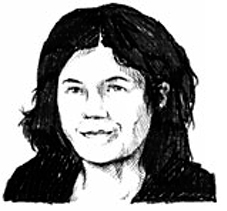 Mary Kaldor is Professor and Co-director of LSE Global Gov­ernance at the London School of Economics and Political Science. Her areas of academic interest include, among many others, Oil and Conflict, Humanitarian Intervention, and New Wars. Her most recent publication, The Ultimate Weapon is No Weapon: Human Security and the New Rules of War and Peace, was published in Public Affairs together with Shannon D. Beebe.

This article originally appeared in the “Identity” Edition of Schlossplatz3 in Spring 2011. From 2006 to 2014 Schlossplatz3 was the official student magazine of the Hertie School of Governance.